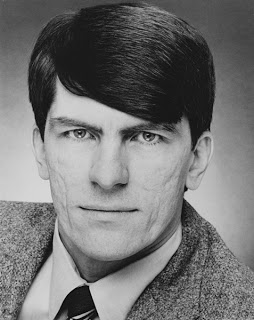 I first met Jim in July of 1983. At a Texas comic book convention that took place in a hotel in Houston. I didn’t know who Jim Shooter was, never had noticed his name in the comic books and mostly didn’t read those pages of text that punctuated the art in the comics. Also, I read the underground or alternative comics, what would now be called independents, like Elfquest and Cerebus and magazines like Heavy Metal. I didn’t regularly read a whole lot of Marvels, and no DC comics at all since I was about 8. I was helping out some friends who were putting on the convention, working security (I had a cool walkie-talkie headset and everything!) and filling in where I was needed. I had purposely worn my cutest punk-style outfit since in those days all it took to intimidate a lot of comics fans was a cute girl. In retrospect, maybe I could have gone with a “Diana Rigg, New Avengers” kind of thing… but I digress. Must…resist…fashion…talk. heh.

I didn’t know at first that Jim was a part of the comic book convention since he was the only one wearing a suit, but my buddies quickly informed me otherwise… Me: “What’s an editor-in-chief?” I don’t even think THEY knew, exactly. On Saturday evening I was getting one of the hospitality rooms of the hotel set up for a party for the convention guests and then I was planning to leave (I don’t much care for parties full of strangers and I didn’t know any of the guests) but Jim arrived early (as he ALWAYS does) and we started chatting. We ended up talking most of the night. When the party got crowded (obviously, I didn’t leave after all) and loud, we stepped out into the hallway to talk more easily. Jim was turning on the charm (yes you were, Shooter, don’t deny it) and we were deep in conversation when a kid walked up to Jim, maybe about nine or ten years old. He wanted to know how Spider-Man’s powers worked. Jim didn’t say “G’wan kid, ya bother me.” or anything like that. Jim smiled at me and turned to the kid and explained to him in great detail, on a ten year old level but without talking down to him, how being bitten by a radio-active spider gave Spider-Man the ability to affect molecular adhesion so he could stick to walls and what that meant (!) and how he had built his web shooters and web goo because he was good at science. He then answered the kid’s questions about how Doctor Octopus’ metal arms worked, in detail, giving this young fan all of his attention until the kid was satisfied. I found it completely endearing. I could tell Jim loved what he did and loved sharing it with other people who loved it, too.

Some years later, after I had moved up north to seek my fortune as an illustrator and had been hired by the lovable Danny Crespi to work in the Marvel bullpen as a designer, Jim and I used to hang out a few nights a week. One evening, coming back from having dinner, we were walking past an upscale hotel. A couple engaged in a loud argument was exiting the hotel and, as they headed for a late model Cadillac at the curb, the man tried to kick the woman from behind. Once they reached the car the man was angrily insisting that the woman get into the front seat and she was screaming her refusal. It was an extremely charged scene. We slowed down, and Jim paused and turned back, obviously disturbed by what was going on. Right about that time the man grabbed the woman by the hair and started trying to force her into the car. Without hesitation, Jim strode toward the couple throwing the sportcoat he had been carrying back over his shoulder. Did he know I was right behind him to catch it? I don’t know. But I caught it. He went up to the man and firmly ordered him to stop. Jim is a tall guy. 6’7″. Kind of imposing when he means to be, and sometimes even when he doesn’t. The man let go of the woman’s hair and went around to the driver’s side of the car and reached under the seat to get something — we couldn’t see what. He came back and faced off with JIm, holding his hand under his shirt, claiming to now have a gun tucked into his shorts. The only thing I could figure to do was stand close beside the man and watch him like a hawk, thinking that if he did draw a gun on Jim (if he even really had one) I might be quick enough (martial arts training) to be able to push his hand (with the possible gun) away from us. There were other spectators and hotel employees watching the scene about a dozen yards away by as well. Calling the police, I assumed. The man was extremely agitated, yelling and threatening and getting in Jim’s face and Jim simply continued to firmly insist that the guy wasn’t going to hurt that woman in his presence. By now the woman was screaming at the man to get in the car (yes, the same woman who had only a minute ago been violently grabbed by the hair — go figure). Jim didn’t escalate the situation, he just remained firm with the man that the violent behavior wasn’t going to be tolerated. And the guy backed off. He went and got in the car all ready to drive off in a huff (with the woman, now in the car) and was looking all around… he couldn’t find his keys. Jim walked over, took them out of the passenger side door and held them up to the window. Embarrassed and deflated, the man got out and Jim handed him the keys. He apologized for losing his temper and told Jim “That’s some woman you’ve got there.” (You didn’t think this story was ONLY about Jim, did you?). The couple then quietly got in their car and left. Probably to continue their raving psychodrama elsewhere, but hey. What can you do?

Does that make Jim sound like a hero? Well, that’s ok. That’s how I see him. We’ve been friends all these years. We’ve worked together and hung out. Jim has encouraged me, mentored me and occasionally even employed me. He’s had faith that I could accomplish things I wasn’t sure I could do. We’ve had disagreements and ups and downs and I’ve seen him go through a lot of hard times and pain, but he’s always been a loyal friend and a brilliant inspiration. In his heart Jim really believes in the kind of heroism that he writes about. Not just as a concept. To him it’s a very real and present thing. And it must be contagious because knowing Jim has had a profound effect on my life and the way I view the world.