Storytelling Lecture Series, Part 13 (Edited from the transcript of a 1994 seminar) 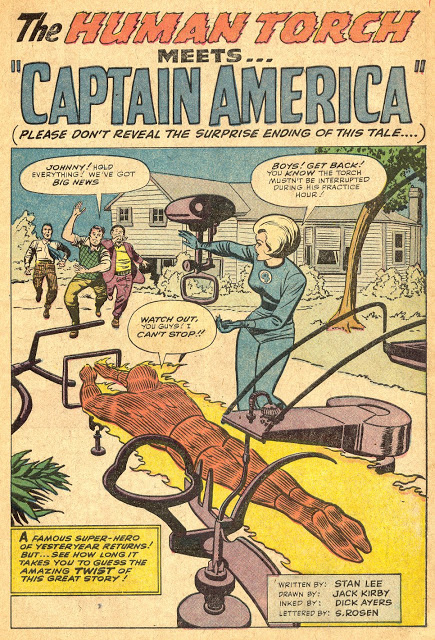 All right, we’re in the backyard of this suburban home. Three young men are arriving. Look at her, the Invisible Girl. You get a pretty good look at her. You’ll see her feet later, trust me. You get a pretty good look at her, enough so that you might actually recognize her if you saw her again. Look at the acting going on here. It’s clear that these guys are arriving and they are excited. What is she saying? Even if you can’t read the balloon, you know she’s saying, “Stay back boys,” just from her body language. Cool.

Now, look at the Human Torch. It’s pretty hard to draw “Watch out, I can’t stop!” even for Kirby. So he relied on Stan. It is a verbal and visual medium. Here is a clue: writers, let the artists tell as much of the story as they possibly can. You provide the “watch out I can’t stop” line when you absolutely have to. If the artist is properly carrying a large part of the storytelling burden you’ll have lots of room to say pithy things, things that can’t be entirely conveyed by the picture. Emotions. Sparkling dialogue. Brilliant insights. Whatever. You won’t have to waste space telling the reader what’s going on, what he or she should be able to discern from the art. There is no dorkier dialogue than, “I’ll use my power ring to make a giant boxing glove.” Have I ever written something that stupid? In the interests of full disclosure, I admit it. Yes, I did. Dorkier, even. I may even hold some world records. But give me a break, I was a kid when I started.

You remember the early issues of the Fantastic Four? On the splash page, you’d see something like the Thing holding some huge piece of equipment that obviously weighed tons. Reed Richards would be stretching, turning dials on top of the machine. Sue was always halfway invisible, practicing invisibility while doing housework, dusting or something. Johnny was always about to give the Thing a hot foot. It was all clear in the art, and so Stan could have Reed saying some ten dollar words that gave you a clue that he was the brains of the operation. Right away, you knew a great deal about the characters. Just like that.

P.S., the machine the Thing was holding up was the McGuffin, the item that provided the impetus for the story—a time machine or whatever. But here’s what I’m getting at. Stan didn’t have to explain the Thing was strong, you could see that. No need to have dorky dialogue to explain the Torch or Sue. Instead of having Reed say dorky things, he could have him saying something meaningful that advanced the tale or gave us insight into his character, like “E=mc2, I sure love Sue.”

There are times when you have to help your artist. He or she can’t do it all. You guys have to work together.

So, back to the Torch/Cap story, what we’ve got here so far is this: we’ve established locale, established all the figures, it’s a small enough locale so that we didn’t have to do two shots to establish locale, and we’ve even introduced the characters a bit visually. We got a pretty good look at her, a pretty good look at these guys and the Torch. Not bad. We’ve telescoped a lot of those storytelling obligations in the one panel. 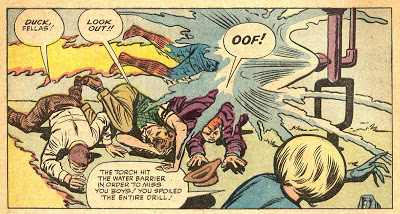 Page two…. So, here’s the Torch. He’s getting sprayed by the hose as he narrowly misses these foolish guys, who have ducked to the ground. You notice that Kirby shot this perpendicular to the vector of the main action. Why? Because it’s a complex action—the Torch flying, the water jet blasting him, the kids ducking—so complicated that if he doesn’t show it diagrammatically, you might not understand it. He was right.

Look at her, Sue. What’s she doing? She’s reacting. The action is taking place at that medium depth—remember, like most sports shows?—full figures, standard human action depth. Clear as a bell. And the reaction? Close up, standard human reaction depth. Aha! But, the panel design dictates that she has her back to us! No problem for Kirby, he carries her reaction in her expressive hand gesture. Genius.

If someone is reacting, talking on a phone, emoting, we usually need to see them up close to see their face and feelings. So, here, Kirby follows the rules. They’re not rules, actually, they’re sort of generalities that usually work. I’ll show you in a while how to violate the “rules,” how to throw them to the ground and dance upon them, on this very page.  But in the case of this panel, Kirby goes with the usual techniques.