Storytelling Lecture Series, Part 16 (Edited from the transcript of a 1994 seminar) 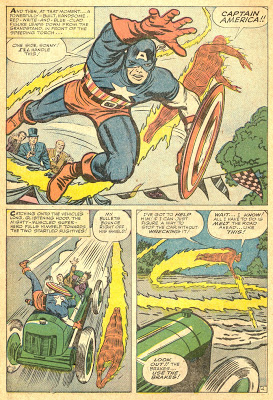 Okay, panel one we have action—full figures if you don’t count Cap’s toe. 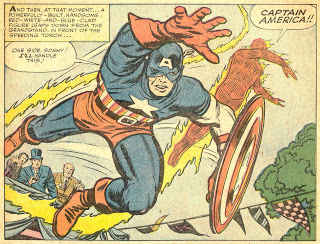 Look at the reactions of the background characters, and the Torch, for that matter. So much is expressed so simply and so powerfully. The words underscore the attitude Captain America expresses in the picture, and the Torch’s reactions, physically and verbally, tells us that what we’re seeing is a big deal. 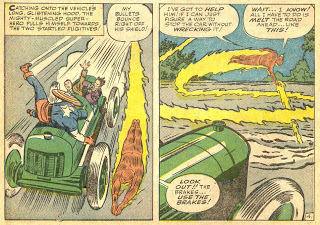 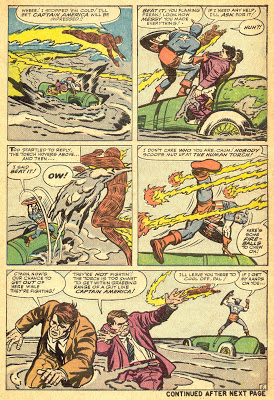 Action, full figures, and he puts the crooks who are reacting close enough to the camera that we can see their expressive faces and gestures. The Torch and Cap’s emotions, farther away, are expressed in big gestures—and unmistakeable. 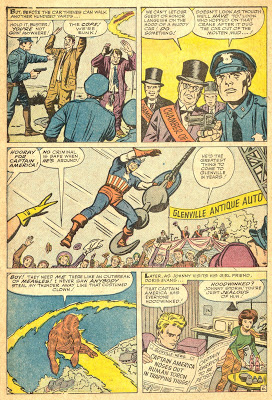 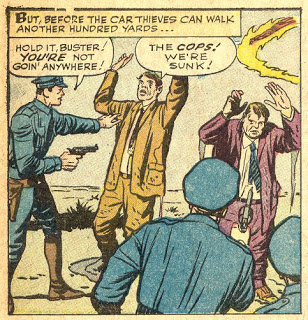 Action, full figures with a couple of foreground figures cropped, suggesting that more cops are arriving. No one could possibly misunderstand this panel. The bad guys are being arrested. Clear at a glance. Notice that the Torch is seen in the background. Kirby wanted us to understand that this is taking place close by where the Torch and Cap are, giving us comfort regarding the location. 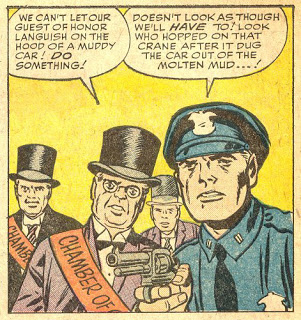 Reactions, all close up. Standard operating procedure. And brilliantly conveyed.

Back to action, full figure on Cap. An expressive hand, foreground and just look at the big-gesture excitement background. Hooray! 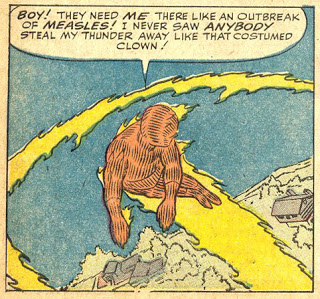 Action, full figure. The Torch is flying away. Note that this is the FIRST TIME KIRBY HAS TILTED THE HORIZON! In every other shot to this point, the horizon is DEAD LEVEL. Don’t be confused by the upshots and downshots. Look for things in each panel that should be vertical.  They are.  Every single panel to this point is level-horizon. Trust me, or get out your drafting tools. Kirby moves the camera up, down and all around, but very seldom tilts it off level.

So why did he tilt the camera thirty degrees or so to the left here? He had a reason. The Torch is waaay up in the air, and he wanted to give the readers a little of that airplane banking feeling, a little vertigo.

DC Comics used to give new artists a copy of a page drawn by Ric Estrada, that they referred to as the “perfect page.”  It had a close up, a long shot, a medium shot….  And the horizon was tilted in most, if not all of the panels, to make it “more exciting.”

Stan and I used to look through a DC comic book once in a while and laugh out loud at some of what we saw—Superman landing with one foot tucked up under his butt, a totally unnatural pose—who would do that?—a ballerina?—panels that had captions saying, “Green Lantern fires his power ring,” in which the art showed Green Lantern firing his power ring and Green Lantern had a thought balloon, “I’ll fire my power ring,” and all the horizons in every panel were tilted.

More exciting? Nah. Just made me seasick, or made me wonder if there was an earthquake going on.

Yes, we at Marvel screwed up too, sometimes. And, yes, I am guilty as charged. I did stupid stuff. Hey, I was young. I got better. Or less stupid. Whatever.

Am I saying you can’t tilt the horizon? Nope. I’m saying DO IT FOR A REASON. Do ANY trick shot for a reason. I recommend doing things for a reason. More on that later.

One more thought regarding tilted horizons. Do you guys go to movies? How often does Cameron tilt the horizon? Spielberg? Lucas? Anybody noteworthy? GET A CLUE! Only comics guys, among all visual storytellers, for reasons mysterious to me, except that DC preached it and required it for a long time, routinely and stupidly, meaninglessly, tilt the horizon. Feh. 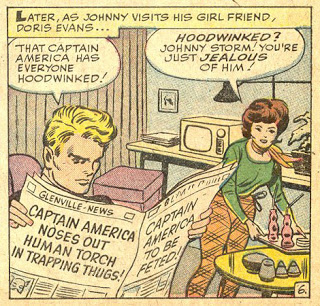 Here we cut to new scene. This is one of the places where comics have a problem because ideally, you want to end a scene on the last panel of a page and start a new scene on the next page. But Kirby has only 100 panels and he had to make a compromise. He was also probably doing this fast—he probably was doing five pages a day—so he couldn’t think about it too long. This is all on instinct. That’s what’s amazing—it’s all on instinct.

He does it. The guy’s a genius. He’s amazing.