JayJay here. I was going through some old stuff recently and came across this Chicago Comicon program that Jim gave me back in 1984. It inspired him to write the following. Finally my pack-rattiness pays off! 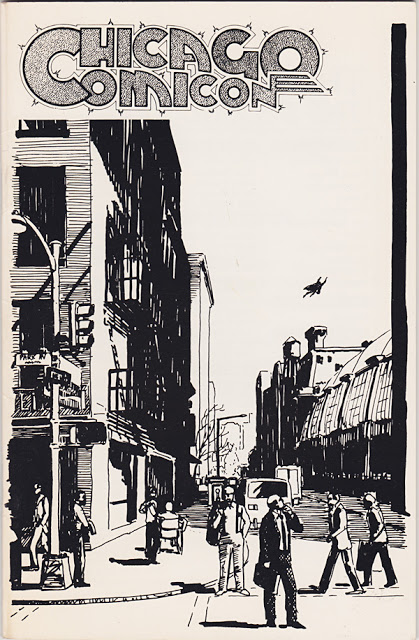 One day, I’m sitting at my EIC desk and my assistant says Mike Gold is on the phone.  Mike, among other things, was one of the organizers of the Chicago Comicon.  This was 1984 and the theme of the Con that year was Superman.

Mike asked me to do the cover art for the program book. Not could I please get John Byrne or some other Marvel star artist to do it.  He wanted me to draw and ink the cover.

Why would you ask the Editor in Chief of MARVEL a lame artist at best, to create an illo for the cover of a convention dedicated to SUPERMAN?

He had his reasons, though I can’t recall any of them right now. Mike was such a slick talker he could convince you that DC Dollar Comics were a good idea.  Anyway, he badgered me into it.

Maybe that was the point.  Maybe Mike was trying to get me to make a fool of myself in public.  As if that was something new….

I had to come up with a concept that my limited skill set could accomplish.

That was the concept. Imagine walking down a New York (or Metropolis) street and noticing a man FLYING waaay up in the sky.

So, I borrowed a camera and walked south from Marvel’s offices on Park Avenue until I found some interesting architecture.  It was the old armory on 24th or 25th. I waited for the light, then went out into the middle of the intersection and took some pictures.

The illustration was based on that photo.  Just one guy, an out-of-towner probably, is noticing Superman flying high.  New Yorkers never look up. Only out-of-towners look up.

I didn’t even attempt a comic book style. I drew and inked it in my old art school style.

Fun fact: The guy in the suspenders is John Byrne, who happened to be passing by, noticed me and wondered what the hell I was doing in the middle of an intersection dodging taxis and taking pictures.  I explained as we walked up to 387 Park Avenue South.

The finished illo was lying on my desk.  Archie Goodwin stopped by my office for some reason, saw the drawing and asked who did it.  I did, I said.  He was amazed.  He really liked it. Enough so he made a copy for himself.

Archie’s copy was lying on his desk when Bill Sienkiewicz stopped by.  Bill asked who did it.  Archie told him.  Bill came to my office to say how much he liked it.  High praise, indeed.

So, the Chicago Con used the cover and I failed to completely embarrass myself, disappointing many, I suspect. 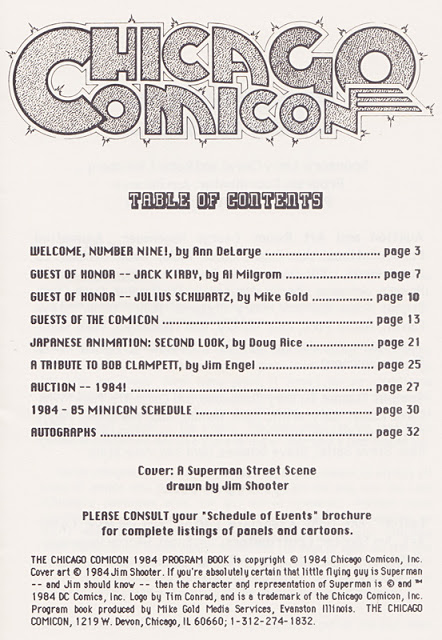 JayJay here. Jim has been going through some old stuff too. Here are some things he scanned and also a few photos I found or that were sent to me. 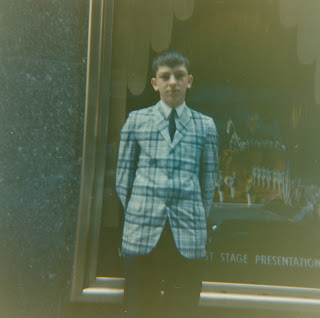 Me, age 14, in 1966 standing in front of Radio City Music Hall, on my first business trip to New York. 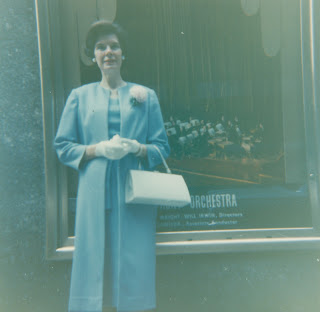 My mother, who accompanied me. 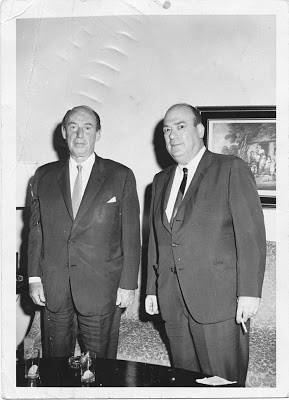 A photo of Adlai Stevenson with Mort Weisinger. Given to me by Mort. Looks like they’ve been on an all-night bender.  : ) 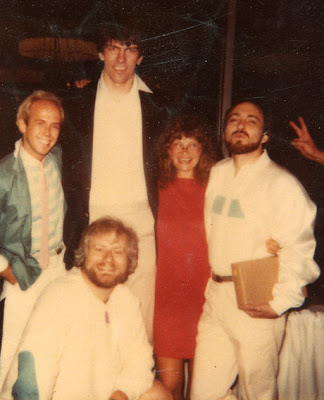 Me with Bill Sienkiewicz, Chris Claremont, Trina Robbins and someone whose name I don’t remember. Probably taken at the San Diego Comicon. 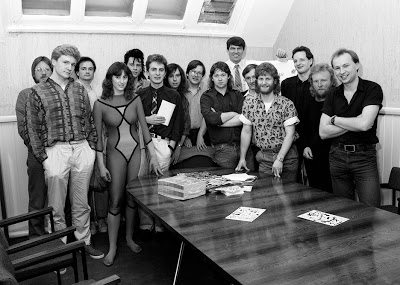 On a visit to Marvel UK. The girl in the Spider Woman costume is the receptionist, Wendy, who was from New Zealand. Also in the photo is Tim Perkins who worked for us at Defiant. Anybody want to help identify the rest? 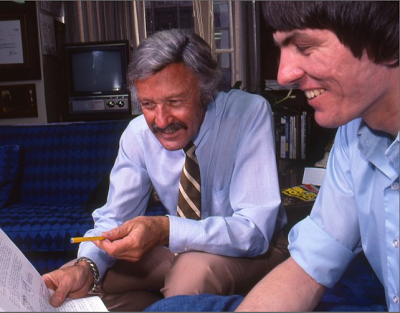 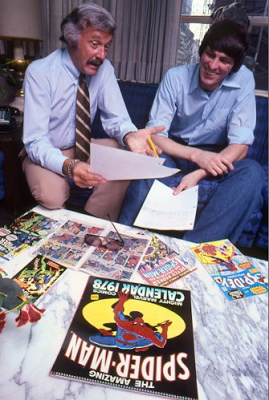 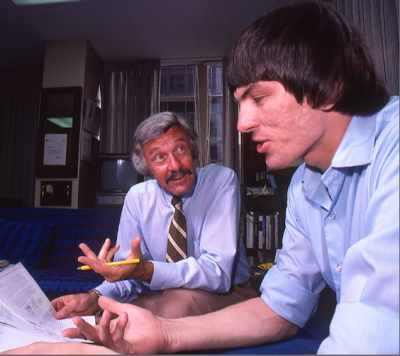 Some photos that were taken by the talented photographer Gilles Larrain of me and Stan for a magazine article. These are totally posed.  We’re pretending we’re working.

In 1982 when I was promoted to VP at Marvel, the editorial department threw me a party and made a giant desk nameplate that everyone signed. 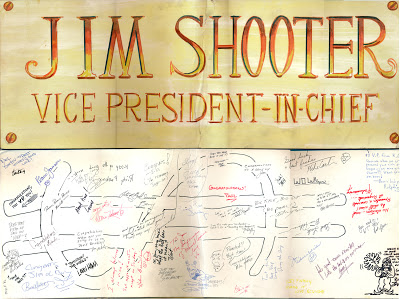 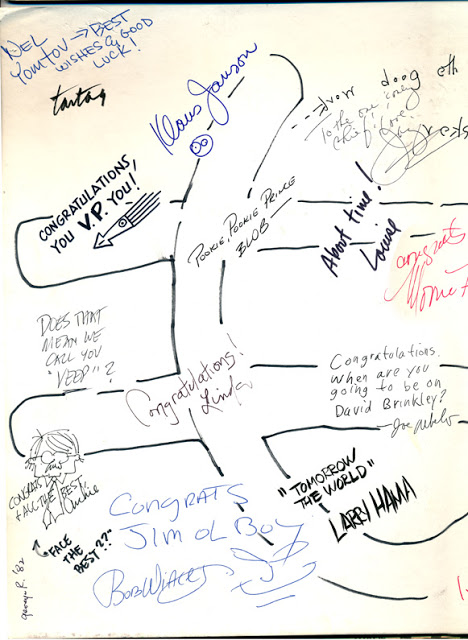 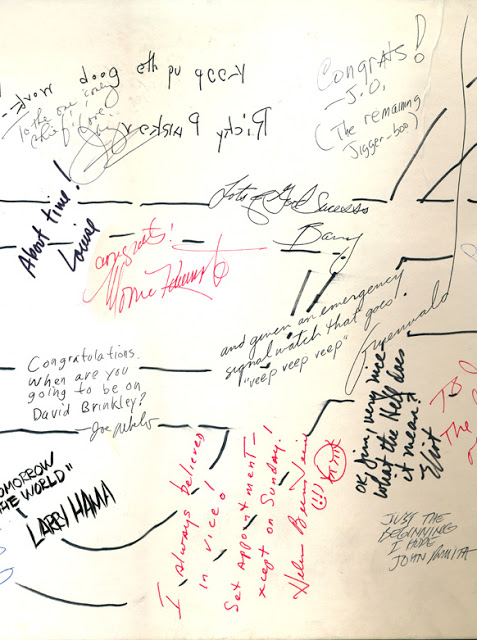 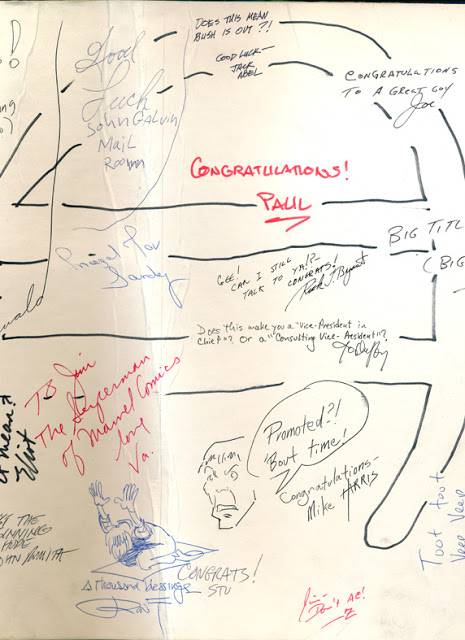 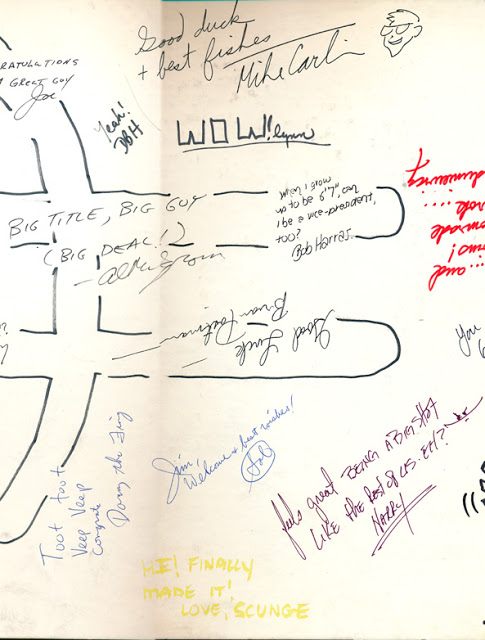 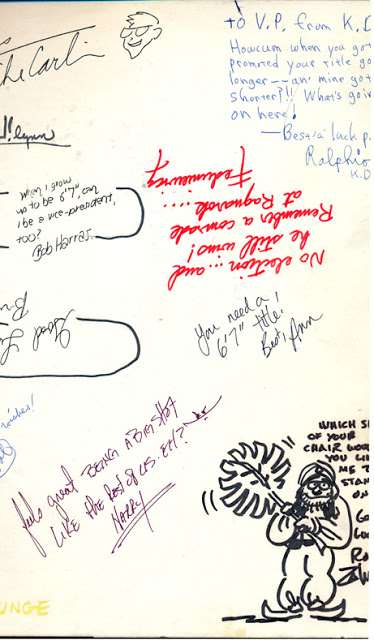