Rooting Out Corruption at Marvel – Part Three of a Bunch

Around the beginning of December, 1977, Marvel President Jim Galton offered me the Editor in Chief job, replacing Archie Goodwin.  (How that came to pass is another wondrous strange tale, coming soon.)  Archie was going to step down as EIC and become a contract writer-editor.

The plan was for Archie to finish out the month and for me to begin on the first working day of January, 1978.  Stan thought it would be best not to announce the change until just before it went into effect.

The month of December, 1977 was a traumatic time for Marvel.  John Romita resigned as Art Director to work full time on the Spider-Man syndicated strip.

And, Production Manager John Verpoorten died at the age of 37.

Sol Brodsky quickly arranged for the promotion of Marie Severin from staff artist to Art Director, to replace Romita.  He also arranged for Lenny Grow, who was sort of the production department staff sergeant to be promoted to Production Manager to replace Verpoorten.  And, he hired his son-in-law as assistant production manager.

The above was a little odd, since Sol had NO AUTHORITY WHATSOEVER to do all of the above.  Those should have been my hires, or, conceivably, Archie’s, though he was on his way out.  My promotion was in stealth mode at the time, at Stan’s request, and I didn’t want to blow my cover by making objections, so I said nothing, didn’t question it.  There was some trouble later caused by Sol’s actions, but that part of the tale will wait.

New Year’s Day 1978 fell on a Sunday, so we might have had Monday off.  But, either Monday, January 2, or Tuesday January 3 was my first day as EIC.

One of my first acts was to change the vouchering and payment system.  All work and all vouchers were to be delivered to the editor.  Only the editor, or me, the EIC, could approve a voucher.

Of course, because before my promotion took effect the only editor, or reasonable facsimile thereof had been “associate editor” me, and I hadn’t yet filled the spot I had just vacated, that meant all work and vouchers came to my desk.

At first, so did the checks.  My plan was to have the accounting department distribute the checks, but I had more than a few fires to put out during those first few weeks, so I didn’t have time to arrange that right away.

After a couple of weeks, the person upstairs who processed the vouchers, Mille Shuriff, caught a double voucher—someone vouchering for payment for a job that had already been paid for.

And solid citizens all, at least voucher wise.  Claremont?  No way.  Moench?  Never.  Mantlo?  Nebres?  Janson?  Give me a break.

Informed by accounting that they had double vouchered and weren’t getting paid, these creators were unhappy.  Unhappy as in mad as hell.

I sat down with Millie, who was sure at that point that we were all a bunch of lying, stealing weasels, to try to figure out what was going on.  We went through all the recent, current and pending vouchers.

We found Gerry Conway’s voucher for Spectacular Spider-Man #3, which, indeed, he had been supposed to write—but he’d left and gone to DC before doing so.  Nonetheless, on the strength of that voucher, he’d been paid for the issue.

But my check for SSM #3 had come with my voucher’s hard copy stapled to it!  I showed it to Millie.  Curiouser and curiouser.

We found among Millie’s voucher batches a Spectacular Spider-Man voucher of mine for issue #7.  Which I hadn’t written.  In fact, at that point, I don’t think it had yet been written.

But “my” #7 voucher was in John Verpoorten’s handwriting.  Hmm.

We made similar finds for the other alleged culprits.  Vouchers for issues far ahead in John’s handwriting.

Finally, Millie and I grokked.

Here’s what had been going on.  John would let a creator voucher a job in advance.  He’d put their voucher through, as he did with Gerry’s voucher for SSM #3.  They’d get paid.  Then, for some reason, they didn’t deliver.

So, someone had to actually write a script for SSM #3.  In that case, me.  I dutifully delivered the job and my voucher to John.  John tucked my voucher for #3 in his desk drawer and wrote out a new voucher for a future issue, in my case, SSM #7.  When the check for SSM #7, made out to me, came down from accounting to John, he removed the hard copy of the voucher for #7 he’d filled out and put it in his drawer.  He pulled out the voucher I’d filled out for SSM #3, stapled the hard copy to the check and delivered the check to me.  It was for the right amount and had the right hard copy attached.  The only indication of what the check was for was on the hard copy.  No such info appeared on the check itself.

John would have repeated the process when someone actually wrote #7.  This, in accounting parlance, is called LAPPING.

So, what was in this for John?  Nothing.  He was a soft touch.  Creators would come to him with a sob story.  He’d let them voucher a job in advance.  They’d swear that they’d deliver.  Once in a while someone did, but most were lying, or they’d simply fail.  A few got so far behind with John they went to DC for work to escape having to make up all that ground.  A few, especially one studio that represented a group of Filipino artists, exploited John’s kindness then callously screwed him over.  They’d had a lot of practice screwing people over, especially the artists who worked for them.

If the advance-voucherer was an inker, on a number of occasions John inked jobs himself in their names, for no pay, to cover their shortfall!  John pitched in a couple of times on Frank Giacoia’s behalf, for instance.  Frank was, in my opinion, brilliant, but he was slow.  John had a lot of sympathy for him.

It is important to note, here, that in those days, the mid-1970’s, comic book work paid very little.  Also, it was page rate only.  No royalties, no incentives, no benefits.  And the page rates were pathetic.  One more thing—though Roy had initiated an artwork return program, the market for originals had yet to take off.  Most originals were worthless.  Example:  Early in his career, Frank Miller approached an art dealer trying to sell some originals to make a few bucks and was offered FIFTY CENTS A PAGE.

Everybody was struggling to survive.

John had too big a heart.  What he did was wrong, but there was no malice in that man.  He erred on the side of humanity.  A gruff Production Manager who was secretly channeling Brother Juniper.

John was privy to the fact that I was coming in as EIC, and he knew that I intended to change the system.  It must have been very stressful just keeping all the balls in the air anyway.  How much did the stress increase when he found out he was certain to be found out?

John was a huge guy.  Almost as tall as me and easily double my weight.  You could fit three Archies inside the space John took up and still have room for a Roy.  He had a sedentary lifestyle, as so many of us do.  He probably didn’t have the healthiest diet.  He smoked.

I’ve thought about it a lot.  I think that if John had been alive when I took over as EIC, and the truth came out, as it surely would have, I think I would have fought to keep John right where he was.  Defended him to the best of my ability.  He was terrific at what he did—the Production Manager part, I mean.  He was loved and admired.  People like that don’t come along often.  We could have made up the difference.  We could have made it right.

Coda:  When Millie and I presented our findings to Financial V.P. Barry Kaplan he was sure he was going to be fired over the mess.  Especially, given the scale—hundreds and hundreds of thousands of dollars.  It was, after all, his responsibility to prevent such things from happening.

I suggested that he tell the President and the board that he had reviewed the voucher procedures (set up long before Barry came to Marvel) because of the new editorial/production regime coming in and that HE had discovered the scam.  I didn’t need a forensic accounting notch on my belt.  He was grateful, and I think it kept him from getting in too much trouble.  P.S. Barry’s the one who taught me the word “lapping.”

A note:  If you’re wondering, the Production Manager and Art Director reported to the EIC, even though it didn’t appear that way before me.  John certainly appeared to be running the place, and any outside observer would have guessed that he was the boss, at least during the time that Len, Marv, Gerry and Archie were Editors in Chief.

Important note:  Though Gerry Conway had, indeed, fallen behind on his quota, and had been a beneficiary of John’s lapping scam, Gerry did the right thing.  When he left Marvel to go back to DC, he informed DC that he owed Marvel some scripts.  Rather than have Gerry work off the debt writing for Marvel, DC sent Marvel a check for the arrears and worked out some payment plan with Gerry.

Addition to the Important Note:  DC’s check was delivered to Marvel’s accounting department.  Barry Kaplan had no clue, at that point (before the scam came to light) what it was for, assumed it was a mistake and sent it back!  DC then sent the check to John Verpoorten, probably at Gerry’s suggestion.  The five figure check was found in Verpoorten’s drawer after he died.  Of course.  How could he deliver the check to accounting without explaining what he’d been doing?

Chris, Moench and the other victims got paid.  So did I.

Guess what?  Somebody still found a way to beat the system. 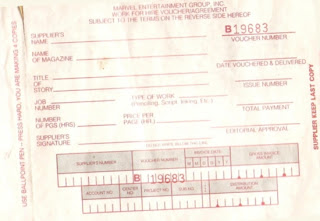 It seems that most people took my “Brother Juniper” reference above to be a nod to the Brother Juniper single panel syndicated strip from years ago.  Nope.  I was referring to the real Brother Juniper, St. Francis’s Brother Juniper, who was known for his boundless compassion and generosity.  He often gave away his clothes, which were property of the monastery, by the way, to poor people who had only rags.  This caused even St. Francis to get frustrated with Brother Juniper.  But, St. Francis was also heard to say, “Would to God, my brothers, I had a whole forest of such Junipers.”