One of the Worst of Times – Slighting Russ Manning

I met Russ Manning at the Con in 1979, I think. I didn’t really have much of a chance to talk to him, just long enough to tell him how much I loved his work, how I relentlessly tracked down every issue of Magnus Robot Fighter. How many times had he heard that in the previous half-hour alone?

Anyway, just meeting him and shaking his hand was a great honor. He was very busy. Inundated by fans like me. He always took time to look at aspiring artists’ work and give them pointers and encouragement, so he was always mobbed.

Next year, I was at the Con again, as usual. I remember it had been a particularly long and tiring day. I was exhausted. As the show was closing, I dragged myself across the street from the old Convention Center to the Executive Hotel and shambled wearily into an elevator that was conveniently waiting. Or being held….

There was another guy on the elevator. I was in the fog of weariness, not paying attention. The other guy, who looked to be twenty years or so older than me said, “Hi, Jim.”

I looked up, stared stupidly for a half-second—just a half-second—before the cogs in my mind turned and I realized that the guy was Russ Manning. Before I could say anything he offered his hand and said, “Russ Manning.”

I stammered the usual apologies one does in such a situation. We chatted for as long as it took to get to his floor.

Next year, once again after a long day at the Con, bone weary, I shambled back to the Executive. Once again the elevator was waiting. Once again, there was a guy.

I looked up and for a moment had no idea who this guy was.

“Russ Manning,” he said, with a hint of a sigh.

In my defense, I offer this: he didn’t look like himself. He looked older. Thinner. Worn. He was ill. Very ill.

He wasn’t irritated with me or insulted. He just seemed hurt, or saddened. I guess he didn’t need to be reminded that he didn’t look well.

I stammered the usual apologies.

That was the last time I ever saw him. I wish I had that moment back to do over.

Someday, when I wind up wherever comics people go after our series is cancelled on this mortal coil, I will patiently stand in line with the other fans, stride boldly up to him when it’s my turn and say, “Hi, Russ. Jim Shooter.”

I think it was 1981. At the Inkpot Awards Banquet, Shel Dorf took the podium to present the plaques as usual, but that year there was a special, additional feature—Sergio Aragonés was also onstage, there to draw a cartoon of every recipient as they accepted his or her award.

Sergio had an easel with a large drawing pad upstage from the podium, behind Shel, and out of his view as he presented the awards.

As each recipient was announced and got up to come to the stage, Sergio, Magic Marker at the ready, would take a good look at him or her. While Shel was rattling off the person’s accomplishments, Sergio would come up with an idea and before the thank you’s were said, he would have completed a brilliant and hysterically funny cartoon starring the awardee. Yes, he’s that quick with the ideas and draws faster than the speed of making light.

It was pants-wetting funny.

Bill Sienkiewicz, who was quickly becoming a star, was at the Con for the first time, which, of course, qualifies one for an Inkpot. But Bill was so excited about it, and so nervous going up to the stage in front of the crowd that he was almost shaking. You’d think it was the Nobel Prize for Super Hero Literature. Sergio drew Bill at the podium clutching his Inkpot, looking all breathlessly, sincerely moved with his knees vibrating like harp strings.

Mike Sekowsky’s name was called. When Mike got up, Sergio’s eyes went wide with that ¡qué inspiración…! look. Now, Mike was, shall we say, a large man, and Shel Dorf was no lightweight. Sergio drew Mike and Shel enormous belly to enormous belly, their arms too short for Shel to hand the plaque over.

That brought down the house. As I said, Sergio was out of Shel’s field of view, and Shel couldn’t imagine why everyone was laughing so hard at first.

Shel announced a posthumous award for a Japanese cartoonist. Again, Sergio’s eyes went wide. He whirled to face the drawing pad like a man possessed. The Marker stabbed toward the paper—but his drawing hand was intercepted, grabbed at the wrist by his non-drawing hand! An epic struggle ensued, non-drawing hand battling to prevent drawing hand from sketching something that might have been, shall we say, in questionable taste. As Sergio’s hands wrestled, rocked by their thrashing, he was writhing around on the stage. Once again, Shel was baffled at why the audience was laughing itself to pudding while he was talking about the accomplishments of the poor, deceased Japanese fellow.

The funniest cartoon was the one Sergio didn’t draw. 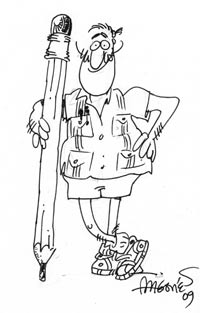