First, this….I’m very grateful for your comments. I appreciate your knowledge, wisdom and insight. I love it when you fill in details that I leave out, when you deepen the discourse and especially when you catch me if I slip up. You’re the best editors anyone could hope for. I look forward to reading what you write. It’s a highlight of my day, every day. Thanks.

Late 1979.  We needed an Editor for a new magazine we had in the works, working title Odyssey.  It was intended to appeal to the adult readers we already had, attract others and open the door to creators worldwide who wanted to work on properties they owned rather than do work for hire on Marvel’s established properties.

I spoke with Stan about it.  Getting the right editor was critical.  I suggested that we offer the position to Archie Goodwin.

I didn’t think Archie would take the job if it meant reporting to me.  First of all, working for someone who used to be your assistant is usually awkward.  Given the drama that arose from my replacing him as Editor in Chief, I figured it was a non-starter.

I proposed that we make Odyssey an entirely separate department not under my purview.  Bring Archie back on the same level as I was, not reporting to me.

Stan was opposed to that idea.  No one doubted Archie’s editorial abilities, but, Stan was afraid that he would have no patience for dealing with upstairs and business baloney.  Just like when Archie was EIC.  Stan thought Archie had to report to me.

So I said, words to the effect, “What if he doesn’t know he reports to me?  What if you offer him the job and I stay out of it entirely.  I’ll never bother him, but I’ll discreetly make sure the trains run on time and take care of all the bureaucratic crap.  I’ll pave the road for him.”

Though Stan’s “publisher” title was largely ceremonial, it was credible that he might be taking an active role as publisher of Odyssey, since he’d been a huge proponent of the idea from the beginning.  He agreed.

Archie, after he left the EIC position, had taken a contract to be writer/editor of three color comics a month, which, I guess was the minimum necessary to make the money he needed .  But, he couldn’t keep up with that workload.  He was the best writer, but by far not the fastest.  He was steadily falling further and further behind on his quota.  A staff position that paid well was, therefore, attractive.

Stan offered Archie the job.  I was conspicuously not involved and not mentioned.  When Archie asked who he would report to, Stan said, “Me.”

Soon thereafter, we discovered that there were trademark issues with the title Odyssey, and so the name was changed to EPIC Illustrated.  I think that was Archie’s idea.  Or possibly Stan’s.  I don’t know.  I stayed away from EPIC editorial like the Kingpin from Jenny Craig.

But, I wrote the EPIC business plan.  I drafted the budget.  I helped put together the creator contracts.  On the sly.

Archie had to pick up the pieces that Rick Marschall had left him, and at the beginning had help from various staffers.  Archie pulled it together masterfully.  What could have been a hodgepodge mess came out fine, and thanks to Archie, EPIC got off on the right foot with a Frazetta cover on the first issue.  It did very well.

There was a provision in the budget for an assistant for Archie.  I made it clear that I had no problem with Archie hiring one of the color comics assistants if he wished, since it would be a little more money and maybe a little more prestige, some would say.  Also, it was a chance to work closely with Archie, not a small consideration.  I don’t remember exactly when, but eventually Archie hired Mary Jo Duffy.  Good choice.

I focused on the regular comics and black-and-whites.

But, I did the EPIC bureaucratic crap.  I did the wrangling with circulation, legal, international licensing and accounting.  I represented EPIC’s interests in the executive staff meetings.

I paved the road.

That’s another story in and of itself, but I’ll tell you later.

Mike spent his first month reading comics and getting the lay of the land.  That impressed me.

After a few months, Mike asked me what was up with EPIC?  Why was it that I did the administrative stuff sort of on the Q.T?  I explained.

Mike wasn’t okay with the EPIC deception.  He called Archie in.  Mike said, “Archie, I want you to know that you report to Jim.”

I think he always did.

Not much changed after that.  I still didn’t interfere with Archie.  (Well, except for a couple of times.  Those make for pretty good stories, coming soon.)  I still did a lot of the wrangling.  Mike, however, took on some of the heavy-duty contract stuff and executive arm-wrestling.  The three of us, Mike, Archie and me, worked together pretty well.

One final note:  I don’t think anyone but Archie could have done what he did with EPIC.  No way I could have.  The Frazetta cover, for instance.  I probably could never have gotten past Frazetta’s wife and Gatekeeper, Ellie.  Archie was well known to the stars and legends.  If stars and legends who weren’t actively working for Marvel had heard of me at all, to them I was a former DC writer who was Marvel’s new, whip-cracking, Blue-Meanie EIC.  Everybody loved Archie.  I ranked between Mussolini and Torquemada on the popularity scale.  He did a magnificent job, and I’m proud to have filled in some of the potholes in front of him on the way.

Now, for your amusement, one of Archie’s interoffice memos, a response to my query about proposed annuals: 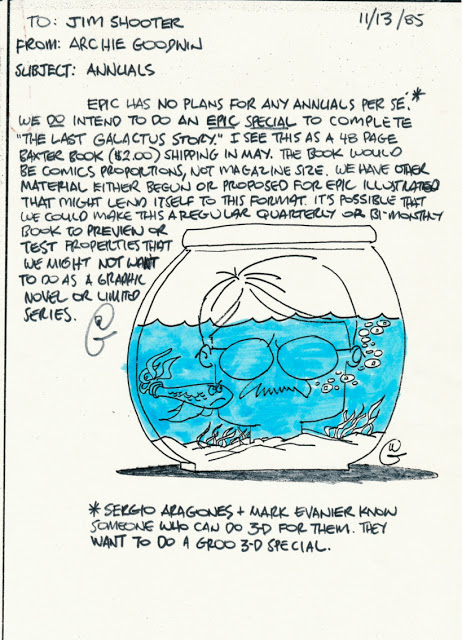