Mean Old MarvelThere were many battles between Marvel and creators over creators’ rights and creators’ wrongs. But, lest you think that it was all battles all day every day at Marvel, here are a few instances where big old, mean old Marvel actually resolved potentially contentious issues peacefully.

Howard Cruse sent me a letter sometime in the mid-1980’s asking about the rights to some Barefootz stories he had created for Marvel some years ago. On his website his is how he describes how that came about and how it went: 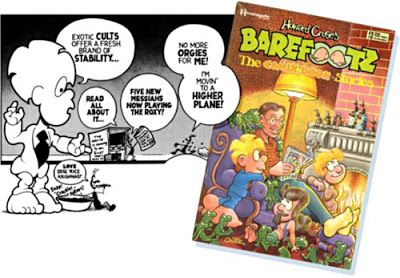 
Even though I stopped drawing Barefootz in 1979, I remained haunted by my awareness that if all of the Barefootz strips and stories I had drawn for Marvel’s Comix Book in 1974-75 were to be gathered together, I would have the makings of a fourth Barefootz comic book. Original copies of Comix Book had grown hard to find in the 1980s, and I hated for those stories from Barefootz‘s peak years to be forever lost. When Deni Loubert launched Renegade Comics in the mid-’80s, I mentioned this to her. She liked the idea. Jim Shooter at Marvel Comics graciously granted us one-time rights to put the still-trademarked Comix Book name and logo on our cover and cleared the way for me to regain all rights to the stories I had drawn for Marvel’s short-lived experiment. In 1986 Renegade released Barefootz: The Comic Book Stories and I breathed a sigh of relief.

All of the above is copyrighted and trademarked by Howard Cruse and scurrilously “liberated” for this one post. I’ll take it down if he asks. I mean no harm.

This is Howard’s site where many groovy things, including much about Barefootz, which is charming, weird and funny, can be found: http://www.howardcruse.com/

In late 1979 or early 1980, Steve Gerber wrote a graphic novel for Eclipse Comics entitled Stewart the Rat. Steve had been threatening to sue Marvel and engaging in legal sparring with Marvel since sometime in 1978. Marvel had fired him when the legal saber-rattling started. I didn’t do it, if anyone cares, though I suppose I would have if ordered to. The one time while I was Editor in Chief when a creator was fired by “upstairs,” by President Jim Galton, was when Gerber was fired. I wasn’t even consulted.

By late 1979, it was clear that Marvel and Gerber were going to end up in court.

Stewart the Rat, I imagined, was a close cousin of Howard the Duck. I also imagined that insofar as Marvel came up or might be alluded to in any way said allusions wouldn’t be full of sweetness and light.

Then Gene Colan told me he’d been asked by Gerber to draw Stewart the Rat. Gene was under exclusive contract to Marvel.

I thought about it. Obviously, to some extent it would be giving comfort and aid to someone who did not have the good of Marvel at heart. Helping Gerber make money to pay his lawyers. And there was the nagging thought that it was the Duck only it’s a Rat, see?

But Gene reallyreallyreally wanted to do it. Gene Colan. A great artist, a great guy and a long time, loyal and faithful contributor to Marvel’s success.

How could I say no to him?

I deliberated not long and wrote Gene a letter granting him an exception from his contract so he could draw the Rat, and allowed Tom Palmer the same so he could ink it.

If it benefitted Gerber, I was okay with that. His conflict with Marvel notwithstanding, he was still a creator trying to make a living—a condition for which I have always had great empathy and sympathy.

I suppose I was taking a chance of drawing some heat from the Marvel brass, but none ever came. Probably they never knew, not being very aware of things to do with the comics, who was who and who was under contract.

Somehow, I never got around to mentioning it.

Outstanding artist Don Newton died in August of 1984. He had worked for both Marvel and DC, but was working exclusively for DC when he passed away.

Joe Rubinstein had worked with Don as an inker both on New Gods at DC and on the Avengers at Marvel. They were good friends. Joe was under exclusive contract to Marvel and Marvel wasn’t on the best of terms with DC right about then. Joe asked for an exception to his contract so he could ink Don’s last job, Infinity Inc. #13.

I had no problem with that.

Up Against the Wall

The battles fought at Marvel were not always about creators and books. Most of them were more like this one: 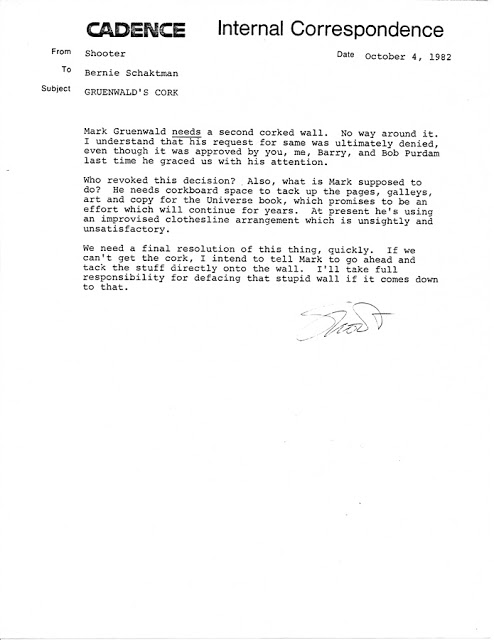 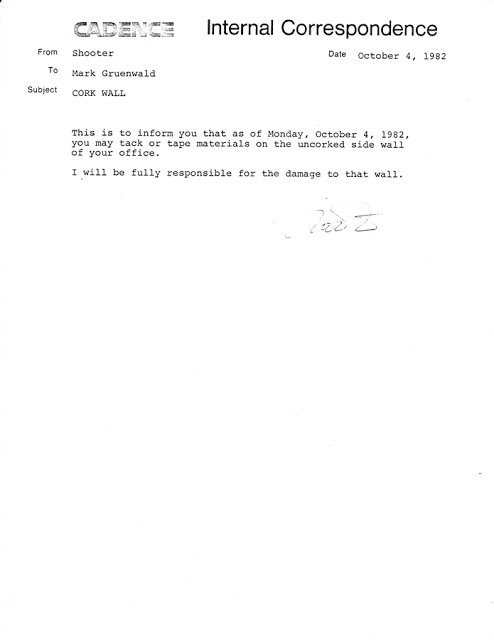 NEXT: Morality in Comics