The tale of the contract negotiations with Roy is too long to tell in blow-by-blow detail. I’ll tell you a bit of what I understand to be his side and a little of mine.

I think we both sincerely believed in the validity of our positions. I think each of us handled things badly at some points. I don’t think there ever was any malice on Roy’s side and there was none on mine, though Roy apparently felt otherwise sometimes.

Yesterday, I showed you a stack of contracts and drafts of same and a file full of letters from Roy. The contracts are what they are, no shocking revelations there.

The letters break down into four categories, basically:

There were lots of the latter.

Roy’s letters aren’t simply business documents (as were Mike Hobson’s letters regarding the Gerber script posted here a while ago). They’re business related, but written person to person—one coworker to another, with informality appropriate to addressing someone you know. They weren’t written for public display, and I will respect that. I will quote a passage here and there.

Here’s a cover Roy complained about: 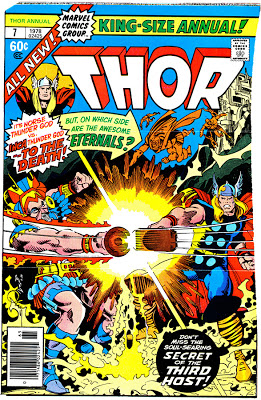 He points out that “Norse” was indicated to be as large as “Inca,” for one thing. He also has issues with the coloring. The main complaint was that “as usual” it wasn’t sent to him to check. 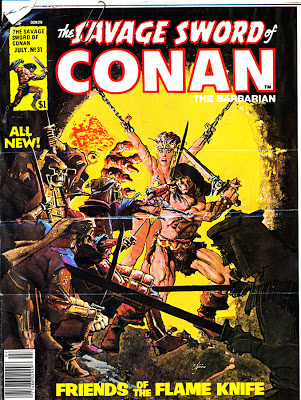 The title on the bottom was supposed to read “FIENDS of the FLAME KNIFE,” not “Friends.” Roy again mentions that “only sporadic” covers arrive for him to check, and that a half dozen errors in cover copy have crept by in a period of a few months.

There are more letters specifically about cover problems, but you get the drift.

More letters citing missing text pages, including one for an issue in which the story contains a footnote referring readers to the text page that isn’t there.

There are many more letters regarding many mistakes in many issues. Art “corrections” that change things from right to wrong. Missing or unaccountably changed copy. Everything imaginable.

The Grand No-Prize goes to Savage Sword of Conan #38. First, the proofs were sent to Roy too late, by regular mail and to the wrong address. Mistakes in the book include, but are not limited to:

If anyone out there thinks I’m citing these things to belittle them or make them seem petty, you are so wrong. I don’t see things like the above as insignificant. NO PROFESSIONAL PUBLISHING HOUSE SHOULD ALLOW CRAP LIKE THAT TO MAKE IT INTO PRINT! It is pathetic. It is unacceptable. Things like that drive me crazy. Roy may be fussbudget #1, but I’m first runner up, and neither of us is Miss Congeniality to the incompetent nitwits who screw up.

It just ruins your work. You don’t need extra copies of issues that have idiocies like that in them, because you’re certainly not going to give any away as samples.

The above was our, Marvel’s fault, or, if you wish, my fault, going with the buck-stops-here theory.

I tried to help the situation by assigning a staff assistant editor to be Roy’s on-site agent, to look after his books and follow up for him. I picked Ralph Macchio. That didn’t work out so well. See “Friends of the Flame Knife,” above. I tried Mark Gruenwald. Strike two.

So, Roy had legitimate issues with the quality of Marvel’s editorial and art production effort. So did I.

You’re probably wondering, what were my issues with him? Or, more accurately, with his being a writer/editor.

Huge workload or not, the quality of the work Roy did personally was never, ever an issue. His stories were solid and his writing was top shelf. I had nothing but admiration for his creativity and skill.

Making a poor choice once in a blue moon considering the vast number of issues Roy produced is evidence of humanity, not incompetence or lack of discernment.

Farming out work to other writers…? I don’t know….

Other problems inherent generally in the writer/editor concept, I think, include:

In Roy’s case, I had no real concern about the quality of the writing. As has been said here many times, if you can get a guy who doesn’t need any creative handholding, who can write and gets it right, that’s ideal. That’s Roy. But you still have to make the words and pictures into a book.

Discussions with Roy about what would happen when his contract came up in 1980 started in more than a casual way right after Stan notified the writer/editors that I was empowered to act in his stead, which was in mid-May, 1978. Roy responded swiftly, saying that regardless of Stan’s letter, he intended to proceed as always, “…with full power over the books on which I work,” and would not tolerate interference.

He continued to go directly to Stan about things occasionally. I know because Stan simply passed his correspondence on to me and came to me with whatever.

Things got contentious between Roy and me a few times.

Roy spoke with a New York Times reporter, a friend of Rick Marschall’s, who was doing a hatchet job on me after I fired his buddy. I took Roy’s remarks to be negative and inappropriate.

Later, I removed Roy from Thor because he was terminally late. I couldn’t reach him to tell him so I sent a telegram.

I, idiotically, talked about that incident to the Comic Buyer’s Guide. (See “Making a poor choice…evidence of humanity…” above.) Roy was upset.

Somehow throughout, we kept making comics. He kept doing good work, kept sending in plans and ideas. I did everything I could for him.

Eventually, Roy’s contract came up. I had always told Roy I thought we’d be able to work something out. And, I thought I had a good scenario worked out.

The idea was to relieve Roy of the non-creative baggage, free him to do creative work and contribute editorially in every way he could or wanted to. Have an editor on site keeping track of the schedule so that problems could be dealt with at earlier stages. Have the editor on site managing all the nuts and bolts of art production and seeing to it that things were done right.

That, and provide a failsafe system. An editor not to interfere with Roy, but to backstop him. In case a glitch in the story ever did crop up, or to at least raise the question of appropriateness if the equivalent of a whipping scene came along.

I almost sold him on my plan.

NEXT: “I’ll Never Doubt You Again.”