I don’t have any special inside information on what’s going on upstairs at Marvel or Disney anymore.
However, I worked for the Walt Disney Company as a consultant for nearly a year back in 1988-1989. I was hired by the head of marketing for the consumer products division, Michael Lynton, and worked closely with Michael and his superior, Steve McBeth. My assignment was to develop publishing plans and lay the foundation for Disney to bring in-house its comic book publishing, then being licensed to Gladstone Publishing. In other words, I was helping to create a comic book and magazine publishing division for Disney.
Because I was working for very high-level people and meeting now and then with others, I got a pretty good sense of the business philosophy and modus operandi of the company at that time. I doubt that the corporate culture has radically changed since then.
You observe that Disney has been “vociferously protective” of their properties.
You betcha.
I believe it is possible that Disney will eventually make significant, if not sweeping changes to the way Marvel deals with creators. I’m a little surprised that they haven’t done more already. Shortly after it was announced that Disney had bought Marvel—has it been two years already?—someone asked me what I thought would happen, and in particular whether Disney would “suck the life” out of the comics. I said this:

This changes the landscape considerably.
Disney will help Marvel with their marketing, merchandising and media muscle. Disney will not tolerate the anarchy, chaos, unprofessionalism, small talents with big egos, and rampant editorial ineptitude/wrongheadedness rife at Marvel (and most of the industry). They’ll fix all that and gain ironclad control over their new “brands.” Which brings us to your speculation re: sucking the life out of the comics. I fear that in the course of fixing the various problems listed above they will go too far and suppress useful things — reasonable freedom, spontaneity, innovation, experimentation, groovy outrageousness and all the crazy-but-good stuff.

I still think so. I do not think it unlikely that in the course of protecting their properties that they might, as you suggest, eliminate the return of artwork and take other steps.

I’ll tell the whole tale of my time at Disney tomorrow or soon. It’s a good one.
Meanwhile….
At the end of a comment about the who-should-get-what-artwork discussion, Brett Breeding added this:

Brett Breeding said…(…)
Also Jim, I was under the notion that at some point it was determined through some fashion (Internally? Legally?) that all the physical original artwork was now considered to be copyright of the individual creators, not a gift but in fact property of the artists, and the companies retain all copyright as to the content and characters. An artist can’t publish his original art, but they can include photographs of the pages in certain types of published works, or catalogs. Are you aware of any of this or am I just misinformed? September 17, 2011 12:06 PM

jimshooter said…
Interesting thoughts, Brett.
I’m not aware of the change in copyright status you’re referring to, but I’m not up to date on industry policy these days. September 17, 2011 1:24 PM

Does anyone know about the changes Brett is talking about?
What’s the Deal With the House of the Mouse?
Back in 2001, Joe Quesada asked me to write an Avengers mini-series that would be a sequel to the Michael/Korvac Saga I wrote a couple of decades earlier. The plot for the series, entitled “Ill-Begotten: the Samuel Saga” is available for download here (in the sidebar). I ultimately decided not to do the project, but I was sent the paperwork. I don’t know exactly what Marvel’s deal with creators is these days, but this is what it was back then: 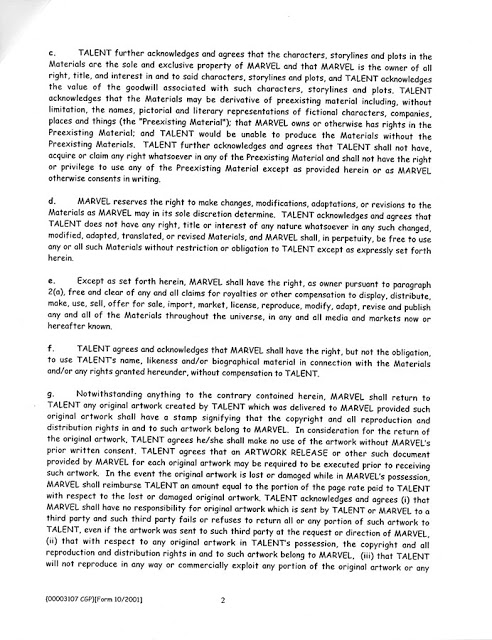 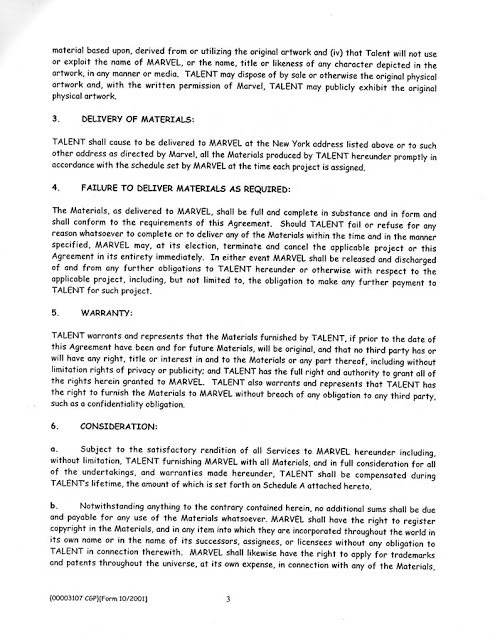 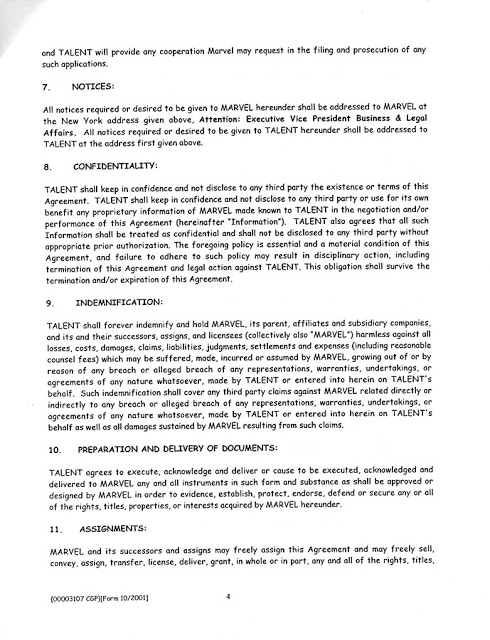 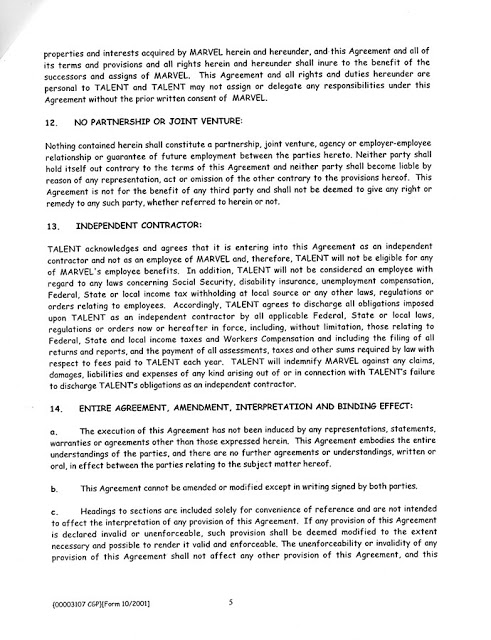 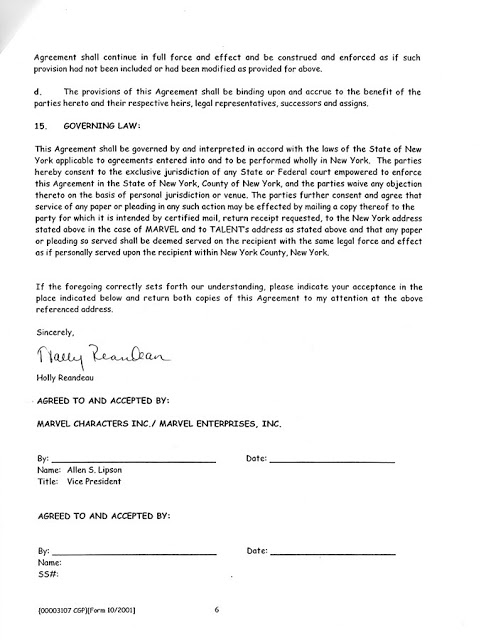 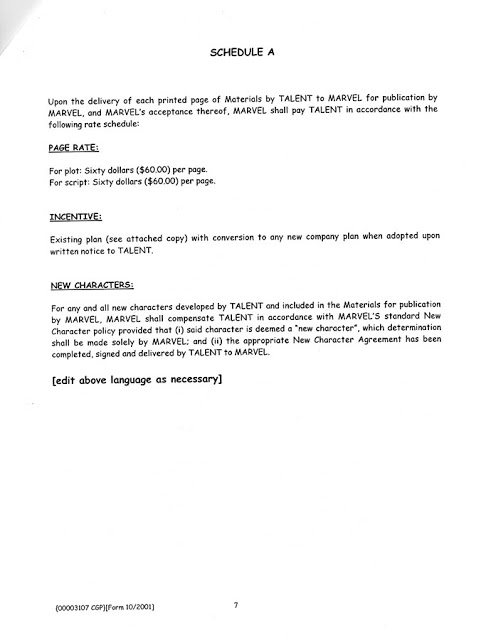 They sent me this slightly revised document later: 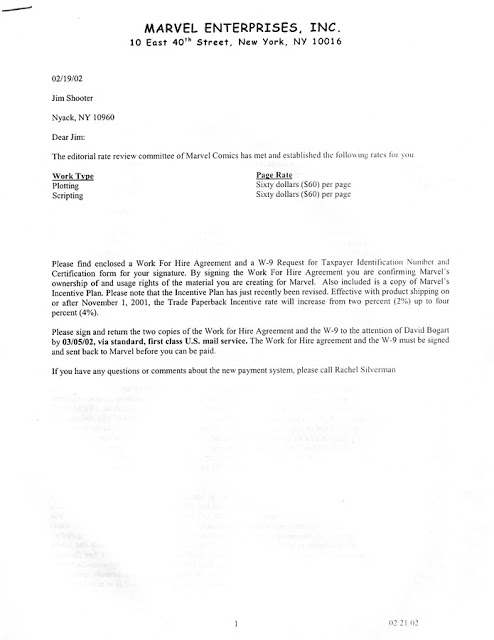 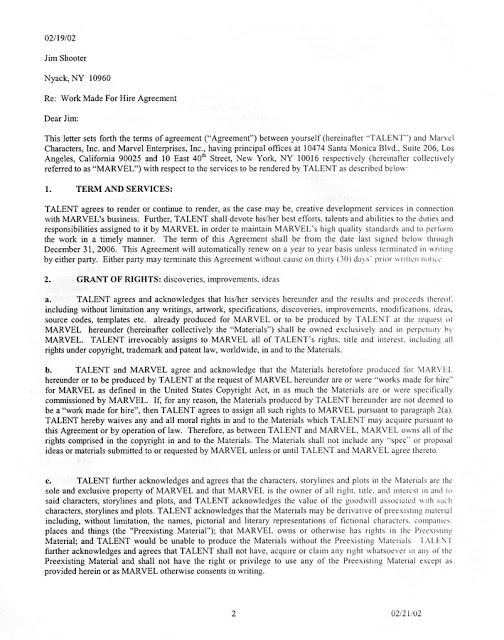 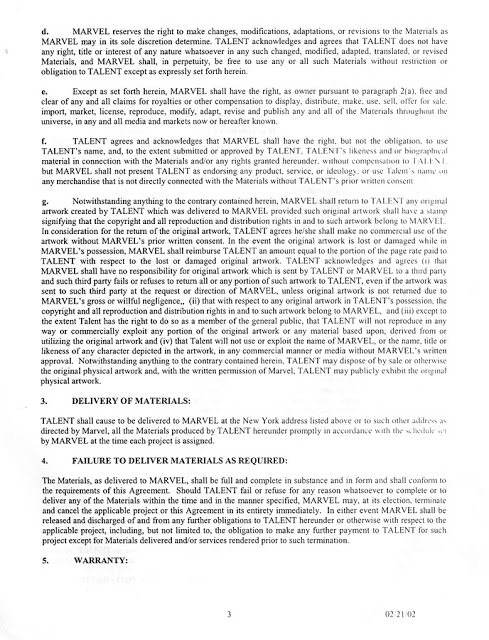 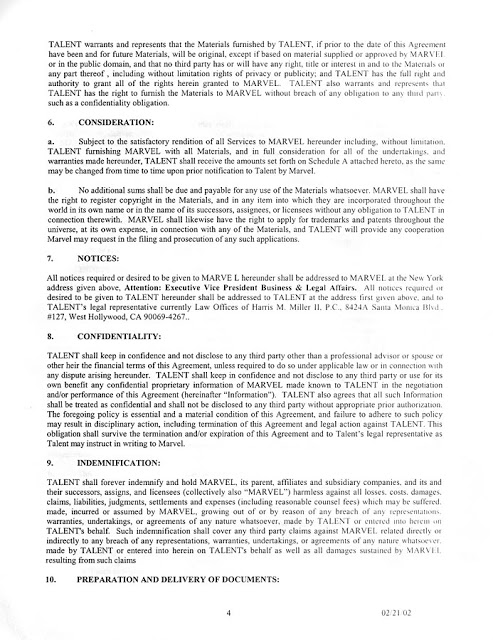 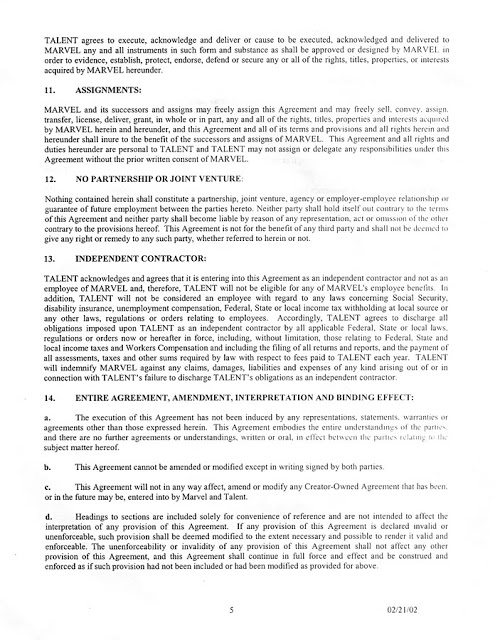 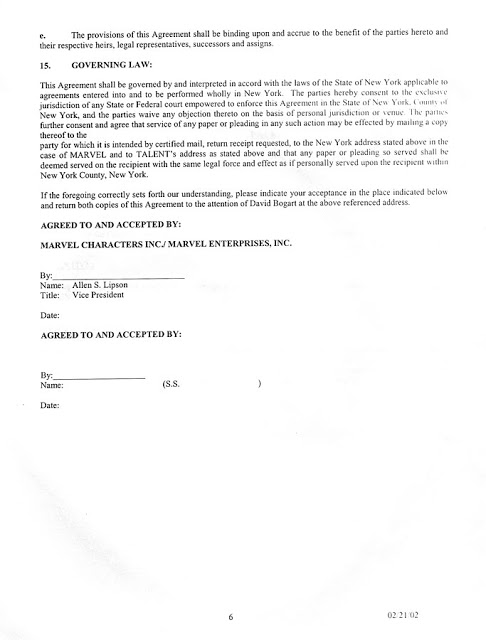 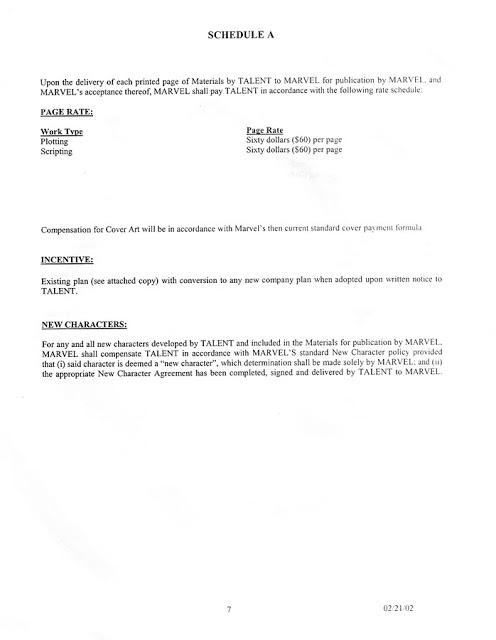 This is the then-current incentive plan: 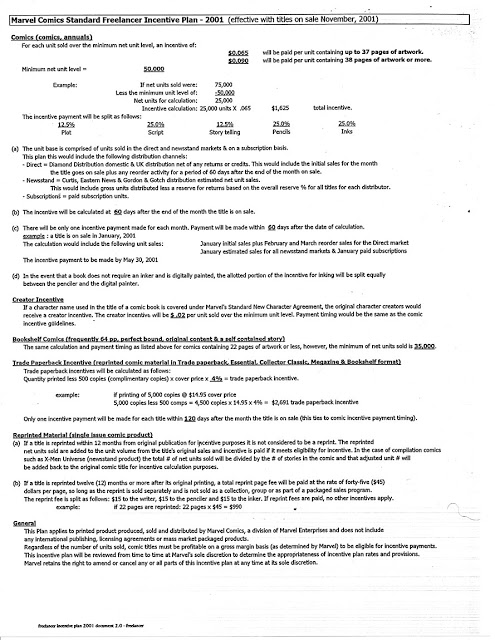 Last time I worked for DC was when I was writing the Legion of Super-Heroes during 2007 and 2008. Their deal was entirely spelled out documents attached to each voucher. Because work-for-hire requires that an agreement acknowledging same must be signed in advance of the job, typically, I’d sign a pile of vouchers and send them to the editor, who would fill in the appropriate information and authorize payment when each job was done. Here’s the DC document: 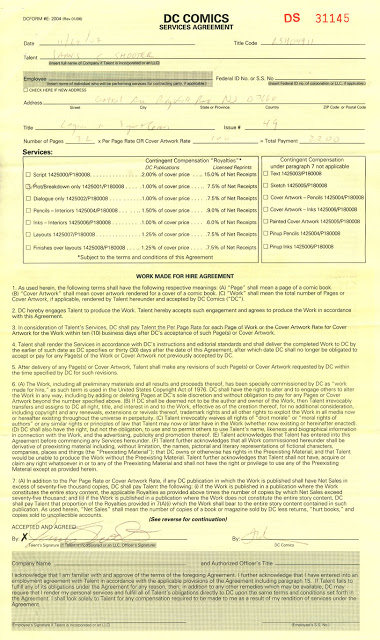 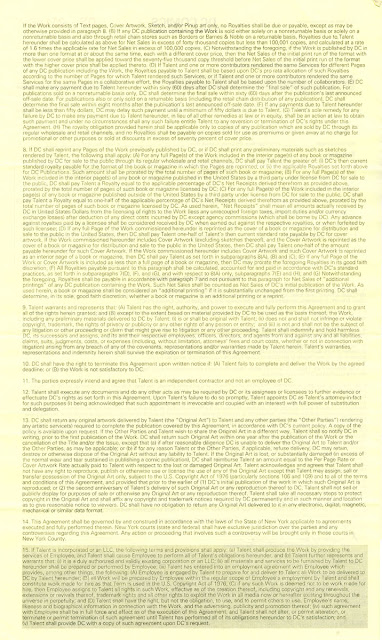 Oh, and by the way, DC announced a change to its reprint compensation plan a while ago: 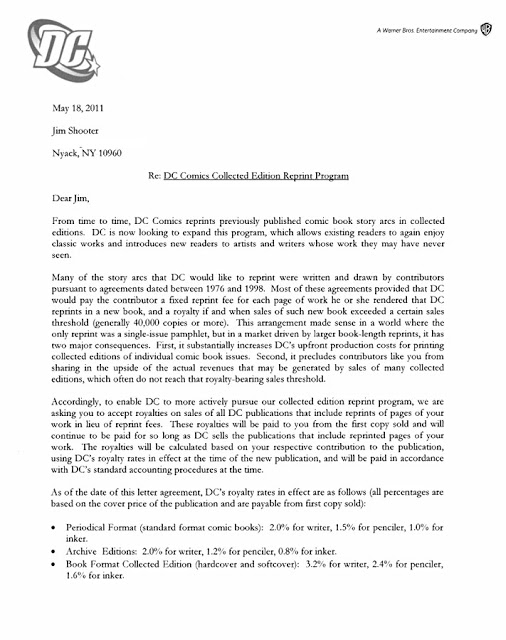 Once More with Feeling
Thanks for all your comments. It’s a great pleasure reading, and occasionally weighing in on the discussions that frequently take place.
NEXT, PROBABLY WEDNESDAY:  Three Comic Book Weddings, or Holy Matrimony!