My sincere apologies. I’m sorry today’s post was so late that it drifted into tomorrow…that is, today. I’m trying. Sometimes life interferes with fun.

Count me as yet another young hopeful, whom, after bleeding art and story on paper, I would swaddle my creations and send them “down the Nile” to the Marvel Submissions Office.

In the mid 1980’s I had sent in a few samples of “panel-by-panel continuity” (as the office called it) and always received some encouraging replies (even though they were rejections). They may have been signed by YOU, Jim. (I saved these letters for many years, but think they were lost in a relocation.)

One time in the late 1980’s, I sent in an original submission (an originally conceived horror story – no superheroes, just various types of architecture, creepy settings, and some nasty doings with top-hatted gentlemen, rabid dogs, rats, a burning castle and a vile succubus at the end).

The reply that I later received in the mail was photocopies of practically the entire volumes of some of Andrew Loomis’ books; “Figure Drawing for All It’s Worth” and another about film techniques and direction.

The letter included in the packet told me that they thought that I had a lot of “very close, but not quite there yet” talent, and that I should cram on the pages of the photocopied volumes.

While I would love to state that you were the correspondent, instead, the reply came from Carl Potts.

The only other time I received such deep, encouraging replies was from Mike Friedrich, to whom I had sent samples after being told to do so by Norm Breyfogle, after his seeing my work.

Neither venture led to any work, or any further contact past that point. Much of the blame falls upon my own shoulders, for not hammering out sample after sample (while striving to improve myself at each go-round).

Truthfully, I felt that I didn’t want to “make a nuisance of myself” and avoided trying to jam my foot in the door (which, I guess would have been the better way to go).

Anyway, while I did manage to get a few independent comics under my belt (as writer and illustrator), the implosion of the 90’s sort of shut the door on that.

But, I will ALWAYS be grateful to ANYONE who takes the time to actually LOOK AT and REPLY TO (hopefully, with encouragement) the blood, sweat and tears of hopeful talents.

These days, there are reality shows dedicated to trying to find the “next big thing” but when I was younger, no one wanted to even look at you.

And thanks to any like you who know what it’s like to be on the outside looking in – waiting… waiting… for a chance.

jimshooter said… By the time I became Editor in Chief, the volume of submissions was too great for me to handle. We had to go to plan B. We’d found that it made sense to use form letters for many subs, because we found ourselves saying the same things over and over in responses. We had at least 12 different form letters, one for each of the most common types of responses. Even those form letters usually were given a personal touch — a signature by hand, a brief hand-written note added…. Interns sorted through the subs first and separated out those obviously done by little kids and, with help from my secretary Lynn and her assistant, responded. Assistant editors usually sorted the remaining subs and selected the proper form letter. Many didn’t fall into a category covered by a form letter, and those got custom-made replies from assistants, art staff, editors or me. When a submission that was really outstanding turned up, it was shown to me. If I thought it merited special attention, I’d turn it over to John Romita or one of the editors to handle. I must have turned yours over to Carl, who was great with new talent. So was Milgrom. Owsley was great with writers, though few of those turned up. Hama was great, too. And John Romita, of course.

(ASIDE:  In 1983 I arranged took every single Marvel Comics editor with me to the San Diego Comic-Con. I proposed to the show organizers that they use that as a promotional tool. In those days, Comic-Con still could have benefitted from promotion. I suggested that they announce that every single person from Marvel with the authority to hire creators would be at the show—“bring your samples.” The organizers enthusiastically agreed, then did nothing. Not a press release I’m aware of, not an announcement of any kind, not a peep. Sigh.)

Occasionally, I received letters from people who wanted to submit samples asking all kinds of questions: “What kind of paper should I draw on?” “What kind of paints or colors do colorists use?” “What should an aspiring writer submit?”  Some asked for photocopies of penciled pages. Made sense. Would-be pencilers who had never seen anything but printed books had no idea what penciled pages looked like. Would-be inkers had a similar problem. And the coloring process was a total mystery. We often sent photocopies of penciled pages and coloring-sized photocopies of finished pages, along with brief explanations, to people who seemed genuinely interested and reasonably of age.

After a while, finally, a little light bulb went on in my head….

I walked into Publisher Mike Hobson’s office with a stack of 18 Marvel art boards in my hands. “Picture this,” I said. “A 32 page book, plus covers, printed on actual, full-size Marvel art boards….”

I went on to describe my idea for the Official Marvel Comics Try-Out Book. Mike loved it. 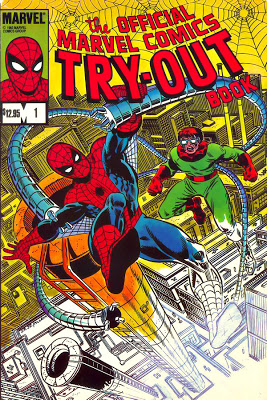 Here is the introduction to the Try-Out Book, which explains its nature and intent:
Here are the explanation pages and some samples of the “try-out” pages. The pencilers’ try-out pages were blank paper, albeit Marvel art boards, or as close as we could get. A publisher’s dream—selling blank pages—but, in those days, there was no easy way I knew of to acquire comics art board. You could buy two-ply, kid finish Bristol board (some guys preferred plate finish, but Marvel’s standard was kid finish) at some big city art stores, but not with the standard blue-line rules and divider marks. So, they were valuable, in their way. 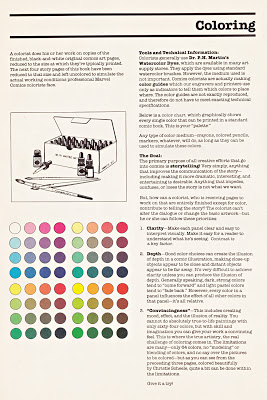 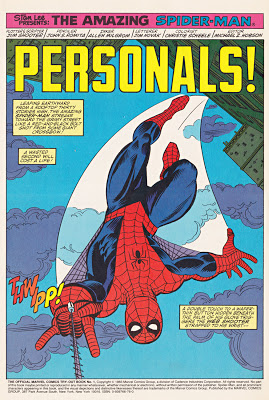 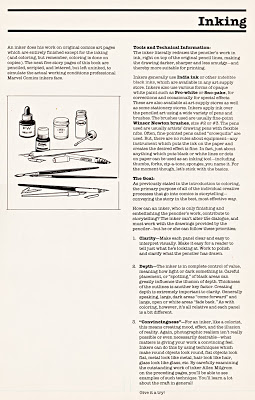 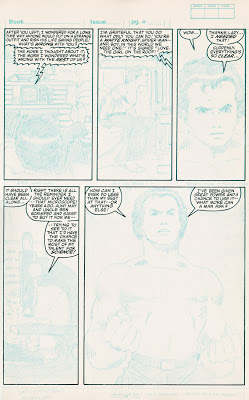 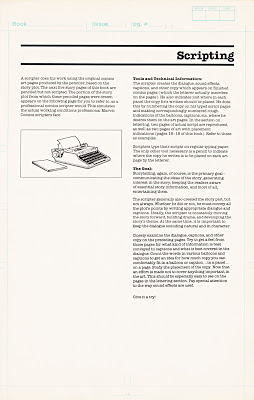 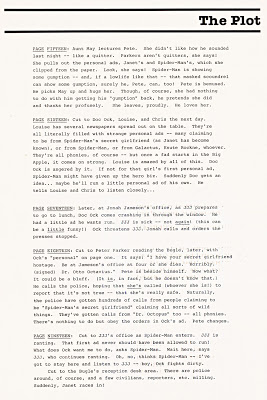 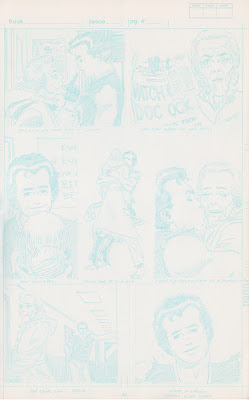 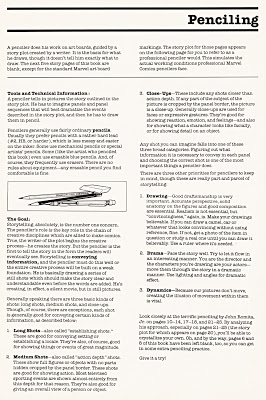 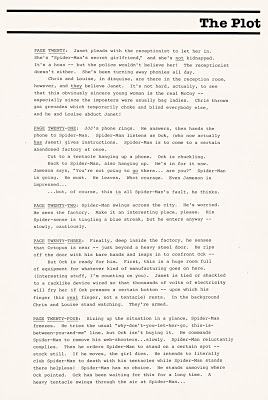 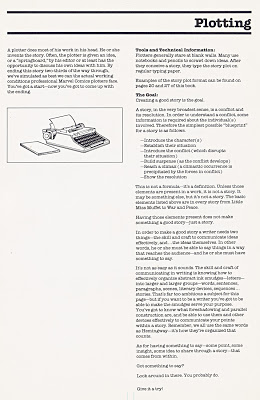 The Try-Out Book was a big success. It sold for $12.95 a copy, but believe it or not, that was a bargain. For you technical types out there, it had to be printed sheet-fed. Non-repro blue is a custom color, a “fifth color.” And the cost of the paper? Ouch. It was the lowest price we could manage.

Shortly after the first edition of the Try-Out Book shipped, I was scheduled to do a series of store appearances in the Bay Area. I arrived at the first store on the tour to find a long line of people waiting for me (I was on time. I almost always am.) with books to sign, samples to show, or just to talk. I noticed that there were copies of the Try-Out Book on the store’s shelves. Couldn’t miss them, they’re BIG.

Among the first few people in line was a fellow who had bought a Try-Out Book a day or two prior and had inked the inking try-out pages. He showed me the pages—still in the book, not pulled out. They were very good. I said, “I think we can offer you work.” I gave him my card and I took his contact info down.

Suddenly half the people deserted the line to rush to the shelves to grab copies of the Try-Out Book.

If it had been a marketing stunt, it would have been brilliant. Nah. Just happened that way.

They sold out of the books in the Bay Area….

The guy’s name is Art Nichols. Art went on to do a good bit of work for Marvel and later, for me at VALIANT. Artie, if you’re reading this, please verify this story.

THURSDAY (I have an unavoidable mission tomorrow that involves a six-hour drive. Sorry.): The Startling Conclusion of the Submission Saga