The Secret Origin and Messy Ending of the Wedding of Mary Jane Watson and Peter Parker, the Amazing, Spectacular Spider-Man

At the Chicago Con in 1986, Stan and I were among the guests. He was scheduled to do a one-man panel. He asked me to do the gig with him.

In those days, Stan’s office was at Marvel Productions, our animation studio in L.A. He spent all his time out there trying to generate film and TV opportunities. That, and writing the Spider-Man syndicated strip. He said that he always got a lot of questions at such panels about the comic books that he couldn’t answer. He was pretty much out of touch with what was going on in the comics.

So we went onstage together. It was a big room and it was packed.

We didn’t do any presentations, just took questions. I think nine out of ten questions were about the comic books.

Turned out we were a pretty good act. I’d answer the basic question and Stan would tag on a funny comment or an anecdote. We were a good tag team.

Toward the end, someone in the back asked Stan if he was ever going to have Spider-Man get married. A lot of people in the crowd voiced support.

Stan said that it was up to “Marvel’s entire editor,” and right then, right there in front of all those people, Stan asked me if I would allow Spider-Man to get married.

Well, I may have been the “entire editor” but anything to do with the comics that Stan wanted I would have cheerfully done.

As Steve Englehart once said, referring to Marvel Comics writers “…Stan is the father of us all.” Honor thy father.

(By the way, Steve’s comment, which I believe I have represented accurately, was made in a footnote caption in one of the comics he wrote, I think around the time I started at Marvel, which was 1976.)

Perfect time for our exit. Thanks for coming, everyone.

By the time Stan and I made it to the door, the whole convention was abuzz about the impending wedding.

Later, Stan and I talked about it. He thought having Spider-Man get married would be a great thing for the newspaper strip. We agreed that it was important to coordinate the comics and the strip so that the event would take place in the same week of the same month and in the same way as much as possible.

Well, we blew that all to hell.

I think David Michelinie wrote the plot for the wedding issue first, but I had some concerns with it. I’m doing this from memory, but I think my objection was that it was too convoluted and unnecessarily continuity-heavy. We planned to do a big PR push. The book was likely to get a lot of attention, likely, therefore to attract a lot of new readers, including people new to comics. It had to be clear and accessible. No need to violate any continuity, but no need to get mired down in it, either. David didn’t have time to do a rewrite, or maybe wasn’t willing. Whatever. I ended up writing the plot.

Getting an art team was more difficult than it ought to have been. It seemed like everyone was stretched thin at that time. But I think we did pretty well, there. Paul Ryan and Vince Colletta did a very good job.

And I thought the John Romita cover was terrific. 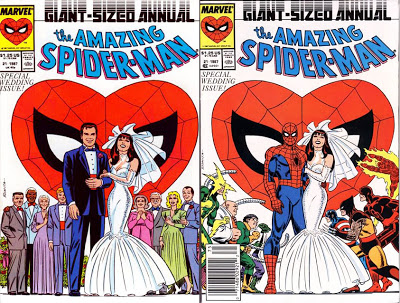 The great, iconic heart logo was designed by Penelope Muddlepud.

All the coordination with the strip fell apart, though. Stan had asked for the ceremony to take place on the steps of City Hall, but either forgot or changed his mind. I don’t remember where the ceremony took place in the strip, but I don’t think it was City Hall. I think we got the timing out of sync, too. Sigh. 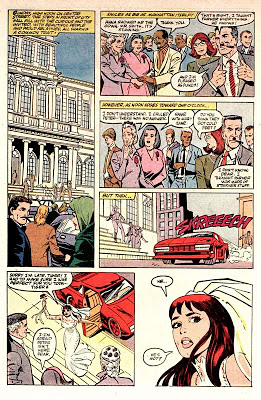 The bulk of the work on that issue was done during my final days at Marvel, during which my attention was elsewhere, and, for that matter, I was elsewhere quite a bit. Marvel Comics had been sold to New World Pictures (which soon became New World Entertainment). The deal was signed in January of 1987. I was usually either upstairs, waging war against Marvel’s corrupt top management people who had been kept in place after the sale, or out in L.A. meeting with New World Pictures principals Harry Sloan and Larry Kupin, and CEO Bob Rehme, working to help forge a positive future for Marvel Comics under the new regime, and oh, by the way, one that included me.

Didn’t work out. I’ll tell that tale later. I left Marvel in April.

I’m not shifting blame for the coordination problems to editor Jim Salicrup or Stan, by the way.

The first few months under new ownership couldn’t have been easy for Stan, either. Stan’s name and reputation were key parts of what New World was acquiring. I’m sure, as Marvel’s key figure in the film and TV development effort, he had many demands on his time. So, what could Salicrup do, if Stan’s attention was diverted? The best he could. Which he did.

Of course, we couldn’t even coordinate between departments at 387 Park Avenue South. Ignoring both the strip and the comic book, Marvel’s crack PR people arranged to stage Spider-Man’s wedding at home plate in Shea Stadium during a Mets game. And, of course, it was Spider-Man, not Peter Parker getting married to Mary Jane. Okay, I suppose that was a change they had to make, for that venue, anyway.

Everyone entering the stadium was given a free copy of the wedding issue.

I was there, invited by the PR people though I no longer worked at Marvel. Hardly anyone paid any attention to the wedding. Almost all the 50,000 or so comic books, it seemed were ripped apart and used to make paper planes, dropped on the floor or thrown in the trash. Sad.

The “wedding reception” was held that evening at the Tunnel, a nightclub in the city. Another bizarre choice, in my opinion. Oh, well. Not my worry anymore. I raised my glass of grapefruit juice to the bride and groom, said good-night to friends from the old workplace and went home.

TOMORROW:  Ménàge a Trois and a Dream Wedding

JayJay here again. I thought I would add my two (or three) cents since I was working as Marvel’s art director of advertising at the time and one of our projects was the Spider-Man wedding. I think it was Pam Rutt who convinced up and coming designer Willi Smith to create Mary Jane’s wedding dress, which was spectacular! I remember seeing it in her office. I was able to convince Bill Sienkiewicz to do the beautiful Spiderman wedding poster, which I still love: 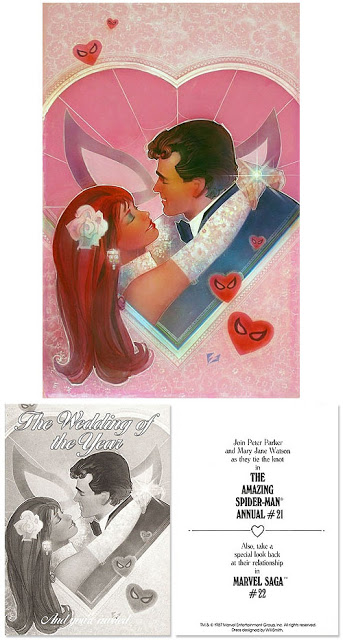 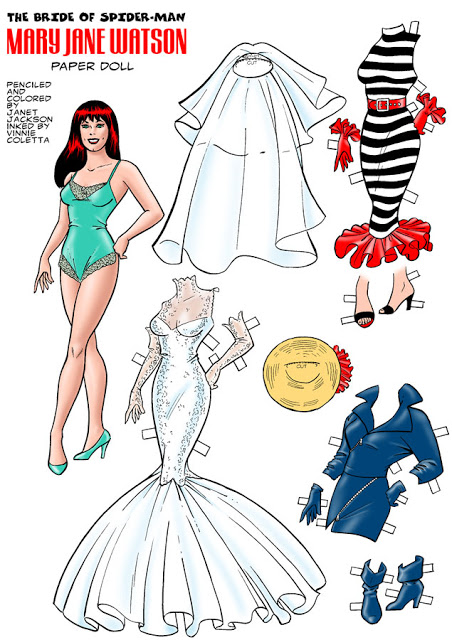 We did loads of cute heart logo pins through our POP supplier Thompson-Leeds and our contact Glenn Carlin over there suggested a fun little lighted pin that we offered to retailers through the new point of purchase program. It was a silly thing, but Carol Kalish told me that it, surprisingly, was one of the most popular things we had offered at the time.

And here are a couple of fun items I found… here’s a video of Stan Lee with Spider-Man and Mary Jane on TV and a clip of the wedding.

And here is a link to a blog by the actor who played Spider-Man at the time:
Heroes in my closet