One little personal aside… the day they filmed this I met and ended up dating the cute sound guy who was working on the show. I later talked him into doing a film he’d been offered called Chasing Amy, though he hadn’t heard of Kevin Smith, and I went down to New Jersey to be an extra in one of the convention scenes! I couldn’t get our Broadway Comics booth to bring since it was being shipped to a real convention, but I borrowed David and Maria Lapham’s Stray Bullets banner and “worked” the booth in the scene. One more connection… I made friends with another extra on the set, an indi comic book guy named Mike Mongillo, who has become an independent film director and I’ve worked on two of his films, Being Michael Madsen and Welcome to Earth, and designed his web site. 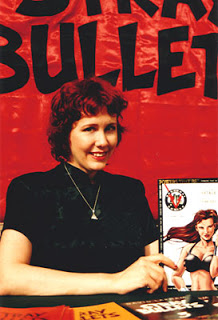 OVER THE WEEKEND:  My Final, and Most Intense October Tale