Sometime in early February of 2001, in the middle of the night, I woke up from an intense dream. I dreamed that my father was gravely ill.

Just a dream, I told myself.

It became a recurring dream. It happened five more times before March 14th, my mother’s birthday.

I hadn’t been keeping in touch the family back in Pittsburgh much, hadn’t been home to visit for a while. Long story there. But I called my mother on her birthday, of course.

While I was on the phone with my mother, in the background I heard my father grumbling to himself about stomach pains. “I hurt,” he said.

My father, Kenneth Shooter, was a man in the way you were supposed to be a man in his generation. I knew of many times when he’d been hurting. I’d never heard him admit it.

It was troubling enough so that I e-mailed my brother-in-law and my cousin, the two most responsible relatives I had who lived in the Pittsburgh area. I told them that they should get my father to a doctor, pronto.

The next morning, I got an e-mail from my brother-in-law saying that Ken was an old guy, old guys normally had aches and pains, and I was making a mountain out of a speed bump.

I replied that I was only eight hours away, if he didn’t get Ken to a doctor that day, I was coming there and whether or not Ken was sick would be the least of his problems.

My sister and brother-in law took Ken to a doctor.

He was diagnosed with pancreatic cancer.

The doctors offered no hope.

He was no quitter. The doctors sort of humored my father’s will to fight but didn’t try too hard. They surrendered the first day.

I think he lived longer than expected on willpower alone.

My father was a WWII vet. Second wave at Omaha Beach. Awarded a Bronze Star (should have been the Medal of Honor, in my opinion). Awarded the Purple Heart for the serious gashes ripped into his flesh by a grenade. That didn’t stop him. He kept going.

Eventually, a bullet shattered the barrel of his carbine, scattering barrel-shrapnel through his guts. That did stop him, for a while, anyway. It got him a trip back to England on a stretcher plus an oak leaf cluster to go with the Purple Heart.

The doctor showed me his x-rays. All throughout his midsection you could see little bits of metal, pieces of grenade and gun barrel still there 56 years later.

He was so angry about the terrorist attacks on 9/11 that he wanted to get out of his hospice bed, get his shotgun and go after bin Laden. Sane people wouldn’t let him get up, but I think patriotic adrenaline kept him alive an extra six days.

During those last few months of his life, we became closer than we had in all the years before. He needed someone he could talk to, and by virtue of keeping my cool and remaining rational, I was elected.

I didn’t make it to Pittsburgh in time the day he died, but that was okay. The whole seven months of his ordeal was our good-bye.

My mother couldn’t maintain the house by herself. I helped her pack up, sell the place and move to an apartment.

My father’s workshop occupied the garage. I decided to sell most of the tools, but keep those that had been my grandfather’s, my great grandfather’s and a few others that I remembered using with my father when I was a kid.

I found everything I wanted to keep—except for a whetstone. It had an unusual shape, sort of like an ironing board. My father taught me how to sharpen blades on that whetstone.

I looked everywhere. I went through that shop carefully, methodically, starting at the cellar door and working my way, literally inch by inch all around. I searched for hours.

I sat down on a toolbox. I couldn’t believe the whetstone was just gone. He wouldn’t have given it away or gotten rid of it. I was totally frustrated.

And suddenly I knew just where it was.

I stood up, walked to the far right end of the workbench I’d been all over a hundred times, without hesitation or doubt slid open a little secret compartment. There was the whetstone, along with a few screwdrivers of great grandpa’s.

Why would he build a secret compartment anyway? To hold a whetstone and some small tools? There were plenty of more valuable items right out in the open.

My father built that workbench after I had moved away from home. I had no knowledge of the existence of a secret compartment. I had never so much as touched that bench during all the years it stood there. No reason to.

Here’s a look at the workshop before I started packing: 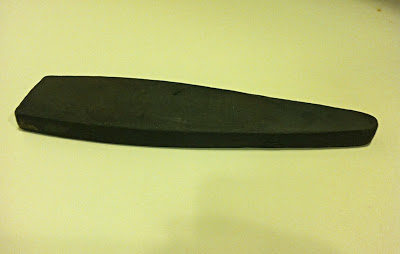 It was ten years ago today that I found the whetstone.

I’ll say it again—I don’t believe in things supernatural. But strange, inexplicable things happen. Therefore, I am very open minded about such things. However I found, or was guided to the whetstone is mysterious to me.

The story above is absolutely true, and told exactly as it happened.
MONDAY:  How to Do Continued Stories and Next or Future Issue Teases