“Totally off-topic, I’ve been reading some old Daredevil tales from the 1960s/70s and was surprised at the “limp” way the female characters were presented. Both Karen Page (in particular) and the Black Widow are from the “Oh, Matt…” school. Any thoughts? (or kick me into the place where I SHOULD have posted this) – MmM “

RE: the portrayal of female characters in the 1960’s and 1970’s. Those were less enlightened times. And not all the creators at that time were up to date even with the current state of enlightenment.

I grew up in the 50’s and 60’s. That was a remarkable time in which a sweeping revolution began that has changed the world, at least the western world, tremendously. It didn’t happen suddenly, all at once, but starting then and continuing now a revolution in the human condition occurred. I was just old enough to retain an awareness of the before and comprehend the transition into the after, up to the present. Therefore, I am able to conceive of and believe in progress beyond the still-sorry state of things.

The world of my early childhood was to a great degree, like the world of my parents’ early lives, the 30’s and 40’s. The world of my teens and thereafter is the new world that developed in fits and starts, lurching and meandering toward where we are now. 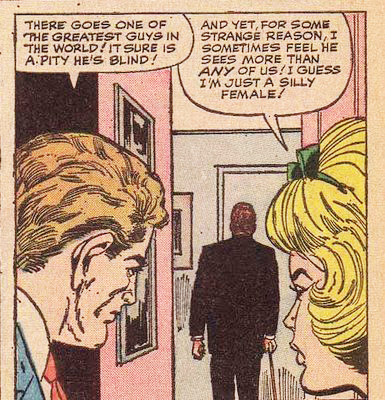 As the situation in real life evolved, so too did the presentation of female characters in fiction. But there was a lag time. Older creators especially seemed to be slow to embrace enlightenment. To some extent, I give those who grew up entirely on the other side of the watershed a “senior citizen discount.” Taught throughout early life various prejudices, or, more accurately false “truths,” it was harder on them to open their eyes. I don’t give them a pass, but I’m more patient with them. 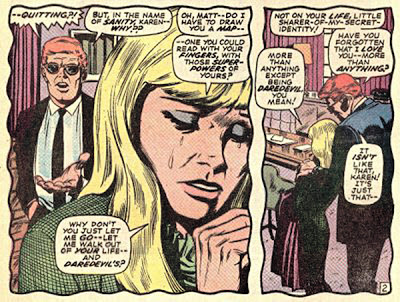 Some creators responded to the comic book business’s slowness to change by emphasizing female characters. Chris Claremont, for instance, routinely made airline pilots female. I asked Chris to throw in a male pilot once just to show that it could happen. : ) P.S. During the early 1980’s, according to an article in an in-flight magazine I read on a British Airways flight, in the entire world, there was only one female pilot flying a regular route for major airline: a London/Africa route, as I recall, for B. A.

Some creators similarly intent on featuring female characters in what would have been considered male roles earlier frequently introduced female police chiefs, doctors and CEOs — though, too many times, they just couldn’t stop themselves from dressing said women in high-slit skirts and fishnets.

My own approach is to try to present reality reasonably recognizably but allow no prejudices to cripple me with regard to the human beings — and androids, gods, mutants, aliens, etc.  : ) — who populate my stories. Also, not to present ciphers — even the toughest person can have a moment of weakness or despair. Even a “limp” person can rise up and show inner strength. I look at the people around me, I look at myself and I try to express the human condition as well as I can. Because often I am writing about heroic characters, and people facing extraordinary challenges, I am often privileged to write about the best parts of the human spirit. And the worst, by the way. 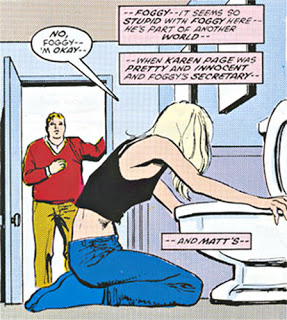 Karen Page, created in the early ’60’s, started out as a beautiful, smart young woman, but as you say, an “Oh, Matt….” type. That persisted for quite a while, maybe until Frank Miller came along, and whatever you may think of how he handled the character, she certainly was no longer the 2-D cipher she had been.

The Black Widow started out as a super-spy, and aside from a rare weak moment —  see above — and shouldn’t have been “limp” even back in ancient days. 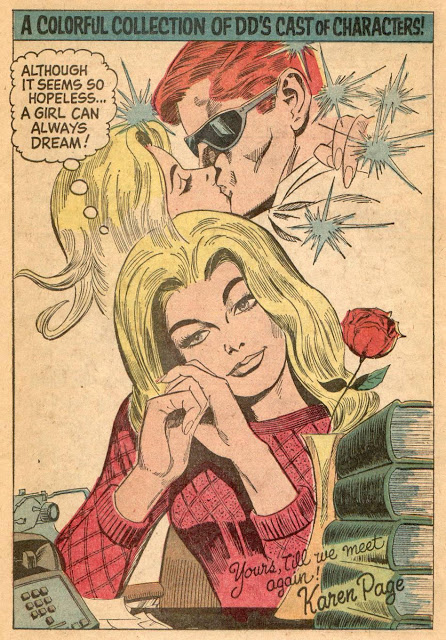