JayJay here. Jim wrote, in a previous blog entry, about the time in 1984 when Marvel Comics was negotiating with DC to publish Superman comics among others. Read that original entry here. John Byrne had submitted a plot to Jim for the first Marvel issue of Superman. Many of our readers have been curious about that plot, so as he promised last week, here is more information.

…to show the actual plot here. Sorry if you’re disappointed. Though he gave me a copy (in 1984), it’s Byrne’s story. Maybe he’ll publish it.

Doesn’t mean I can’t tell you the tale in my own words, as faithfully as possible.

The first chapter is entitled “KRYPTON.”

As in the classic origin, scientist Jor-El has discovered that his world, the planet Krypton is going to explode sometime soon.

Could be today, any day, but surely within a month.

Jor-El is a member of Krypton’s ruling “Council of Twelve.” Warning tremors shake the Council room, but the other members refuse to believe the danger is real. Jor-El is angry. Let them all die, then!

At home, Jor-El talks things over with his wife, Lara, who is six months pregnant. He has a plan to save her and their unborn child, at least, to which she tearfully agrees.

He was hoping that a large spacecraft might be built, big enough to save a “major portion” of the population, but time has run out. He has built a small “model” of the big ship he proposed, just large enough to hold one adult. He intended to pilot it himself on a “test flight,” but forget that. The untested little ship must carry Lara off world and safely away from Krypton’s catastrophic demise. There is no other way.

Jor-El makes preparations with frantic haste. As Krypton is rocked by its violent death throes, Jor-El and Lara say their last good-byes.

The launch must be timed perfectly.

Jor-El knows that Lara and fetus will become super-powerful as they are affected by the rays of the yellow sun where they’re headed. He also knows of an “additional factor” as well that will help them survive on the world that is their destination. Timing of the launch is critical to this mysterious factor.

At the perfect moment, Jor-El waves to Lara in the little ship and launches the rocket. Lara looks back at dying Krypton—which explodes, sending forth a burst of “searing radiation”—the mysterious, additional factor, maybe? John doesn’t say. Lara feels the radiation affecting her just before the rocket enters hyper space.

The second chapter is entitled “SMALLVILLE.”

Earth, the USA, somewhere out in the sticks, fifty-something Jonathan and Martha Kent are riding along in their pickup truck. They’re farm people, good people. They witness the little ship launched months ago by Jor-El crash in a field.

They run to investigate.

Jonathan pulls badly-injured Lara from the wreckage. Right then and there, with the Kents’ help, she gives birth. The child, a boy, yelps when Jonathan slaps him on the butt. He seems unharmed and healthy. Just before she dies, Lara names the boy Kal-El.

The childless Kents decide to keep the baby as their own. They name him Clark.

They successfully convince friends and neighbors that 50-some-year-old Martha had been pregnant, but they’d kept it secret.

No mention of what became of the wreckage of the ship or Lara’s body.

At the age of two, at Clark’s birthday party we are introduced to the Langs, friends of the Kents, and their infant daughter Lana.

Clark begins to demonstrate fantastic strength, but only the Kents see.

At age ten, Clark is attacked by a bull while crossing a pasture. The bull does its best to kill him, but cannot harm Clark. His clothes are not so lucky. They’re shredded. Clark flips the 1,000 pound bull over his head, then runs home to tell mom and dad about the event. The bull, by the way, is okay.

Jonathan and Martha caution Clark to keep these things he can do secret, lest government or military people find out and come to take him away for who knows what purposes.

At age fifteen, while playing with his dog, Clark discovers he can defy gravity. The dog playfully leaps at him, knocking him backward a few steps. Instead of falling into the drainage ditch behind him, though, Clark finds himself hovering over it. After a little practice, he learns to fly.

Meanwhile, Jonathan (in his late sixties at this point) is trying, with two other men, to physically pull a tractor out of some mud it’s stuck in. The exertion triggers a heart attack and Jonathan dies.

The third chapter is entitled “METROPOLIS.”

Years later, after graduating at the top of his class from “journalism school,” Clark is hired as a reporter by Perry White, Editor in Chief of the Daily Planet in Metropolis. He meets “brash” Jimmy Olsen, a cub reporter, and Lois Lane. Byrne describes her as “…beautiful, but in a city-slick, used sort of way, tousled and vaguely rough at the edges.” She’s the type who would curse a lot. Clark is “instantly infatuated.” She welcomes Clark.

Lois and Clark, both superb reporters, become not-so-friendly rivals, despite Clark’s infatuation. He allows her to win, to get the story first sometimes.

Perry White urges Clark to try harder. Women and children first is for lifeboats (or little rockets, I suppose). White somehow knows a big story is about to break and tells Clark to go get it.

The next day the President is taken captive by terrorists. Lois investigates by traditional means. Clark surreptitiously uses his super powers to locate the farmhouse where the President is being held and alerts the authorities. They storm the place. Five people die in the raid and the President is gravely injured.

Clark realizes that if he’d handled it himself, he could have saved the President without any loss of life.  The little light bulb goes on….

He talks it over with his adoptive mother, Martha. They agree that he should stop hiding his powers and use them for good. To protect those close to him he has to keep it secret that he, Clark, is the hero he now means to become.

When he was a kid, Martha made him wear glasses he didn’t need to make him “more human.” (?) He’ll start wearing glasses again to help disguise himself when he’s Clark Kent. A point of difference from his hero self.

Martha, anticipating this day, long ago bought red, blue and yellow cloth from which to make a costume.

Apparently, as Clark aged, he developed…something…an “aura,” perhaps, that more and more protected his clothing when he did super things. So, she will make him a skin-tight uniform to take best possible advantage of that.

The fourth chapter is entitled “THE MAN OF TOMORROW.”

Sometime later, a caped, costumed figure breaks up an armored car robbery and frees hostages. Bullets bounce harmlessly off of his chest. He turns the miscreants over to police and flies away.

Then he pulls subway cars full of people from a collapsed tunnel. Lois Lane is there, reporting. She reaches the caped man before he can fly away. She doesn’t recognize him as Clark.

She is as attracted to this caped hero as Clark was to her.

Lois wants to tell this mysterious hero’s story. She asks him questions, which he answers. This will be her greatest coup ever as a reporter. Sorry, the caped man says, he’s already given his story to someone else, Clark Kent. He flies away.

Elsewhere, later, a shadowy figure watches television news accounts of the exploits of the caped man.  He reads the Daily Planet article by Clark Kent, which has the bold headline: “SUPERMAN! MYSTERY HERO PROMISES TO BATTLE FOR TRUTH, JUSTICE AND THE AMERICAN WAY.

The shadowy figure is criminal mastermind Lex Luthor, who decides that he’s going to have to get rid of this Superman.

Here are a couple of memos from way back that address issues of creator compensation brought up in the comments: 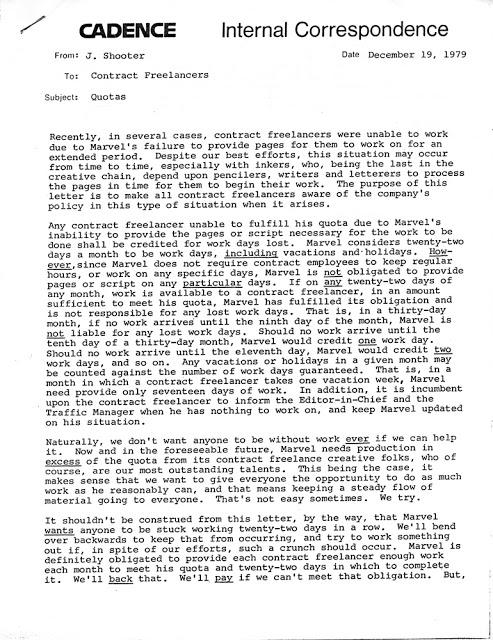 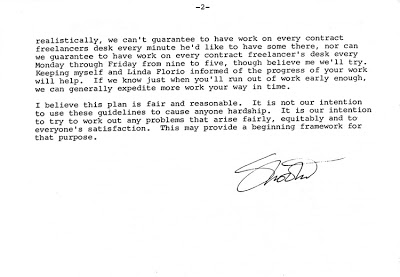 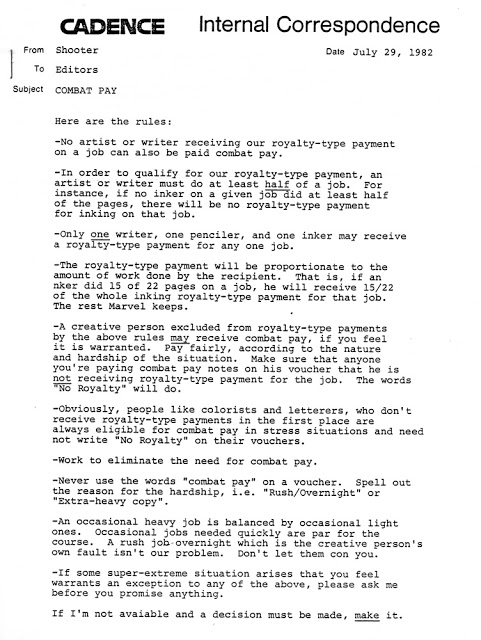 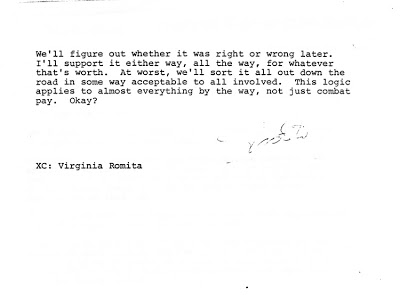 NEXT:  More Tales to Astonish