Sorry I didn’t manage to post anything over the long Thanksgiving weekend. I had some pay-the-bills work that had to be done and it took longer than expected, as everything always seems to.

Speaking of Thanksgiving, I am very thankful for your kind donations, which have enabled JayJay the Blog Elf to devote the time it takes to do all the technical work on this thing. Being computer/Internet unskilled, I literally couldn’t do it without her.

I promised a review last week. Iron Man has been one of my favorite characters since back in the days when transistors seemed new. The plan was to do a review of Iron Man the movie and also a current Iron Man comic book, but I haven’t had a chance to watch the movie yet, and JayJay and I have been waffling about which Iron Man comic book to analyze. We’re hoping to find a good one that gives me the opportunity to cover some new ground. Suggestions welcome. It doesn’t really have to be an Iron Man book. Should be Marvel. Not by Bendis. Let’s give him a break.

I’ve expressed a less than glowing opinion of the Comic Book Direct Market here recently, which I think, as things stand, is a major impediment to the comic book industry.

I also said that the advent of the Direct Market back in the mid-to-late seventies saved the industry, and for many years was a Godsend.

And founder and principal Steve Geppi is Diamond.

The current, depressed state of the comic book industry, the current stifling limitations one-channel distribution places upon it and the desperate thrashing around by publishers to survive until some new way to effectively sell comics medium entertainment develops are not Diamond’s fault. Certainly not Steve’s fault.

We, the comic book industry, got where we are honestly enough (if occasionally stupidly).

The comic book industry has few friends as good as Steve Geppi.

A Trip to Timonium

I spent most of September 11, 2008 with Steve Geppi and Herman Rush.

Sometime early on during my DEFIANT days, I was introduced to Herman Rush by Jack Hyland, a partner at McFarland Dewey & Co., the same investment banking firm that helped me get DEFIANT funded.

(ASIDE: Jack Hyland is one of the best and brightest human beings on the planet. I will tell stories about him, McFarland Dewey and all we went through together sometime soon. Here’s a tidbit about Jack: he wrote a book about his grandfather called EVANGELISM’S FIRST MODERN MEDIA STAR: The Life of Reverend BILL STIDGER. It’s not a religious book. It’s a penetrating look at an innovator who, in the early-to-middle part of the 20th Century, embraced emerging media, technology, marketing and publicity to revolutionize his field. It’s a window into the remarkable times Stidger lived and worked though: the Great Depression, Prohibition, the rise of Nazi Germany and World War II. It’s fascinating. I recommend it, and not because Jack’s a friend.) 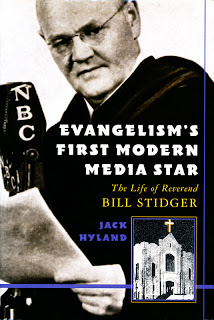 Herman Rush is an amazing man. Among his accomplishments, he served as Chairman of Columbia Pictures Television, he ran Coca-Cola Telecommunications and he was one of the original Executive Producers of The Montel Williams Show.

Sometime soon I’ll tell you about the time Montel Williams called me up to yell at me….

Anyway, Currently, Herman chairs the Board of Trustees for the Entertainment Industries Council, and is the owner and President of Rush Associates, Inc., multi-media developers and consultants. He lives out in the Los Angeles area on a big piece of land—I guess it’s proper to call it a ranch—where he keeps a menagerie of groovy critters including a doylt of pot-bellied pigs. 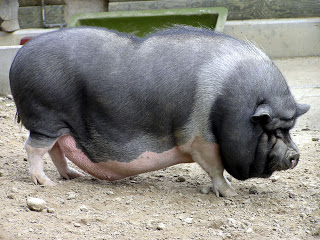 One of the most interesting things about Herman to me is that he bought all of the old Filmation animation cels, warehouse and all, as I recall. He sold a lot of them. I’m not sure how many remain.

Anyway, in 2008, Herman and a partner were working on developing an Internet business that I guess I’d describe as the ultimate entertainment/popular culture portal. He was interested in a comic book component. Naturally. Which is why mutual friend Jack Hyland introduced us. Herman thought that I could be the key player for the comics portion of the site and a contributor to many others, given my diverse creative and management experience. I think he imagined something like what I’m doing here, but on a grander scale—not just me and one measly Elf—involving more contributors and more content.

He also wanted to meet Steve Geppi. Naturally. Steve is not only a major figure in the comic book business, he’s a leading historian, collector and authority on all things entertainment and popular culture-oriented. He owns and runs Geppi’s Entertainment Museum in Baltimore, at Camden Yards, which houses what must be the best collection of pop culture-related items and memorabilia in the universe.

So, I called Steve and arranged a meeting.

I met Herman at Penn Station in New York. We took the train down to Baltimore and a cab to Timonium, Maryland, where Diamond’s headquarters are located.

Steve’s assistant, super-Sammi ushered us into his office.

If you don’t know Steve’s story, here it is:

Steve gave me a couple of magazines in which there were articles about him: 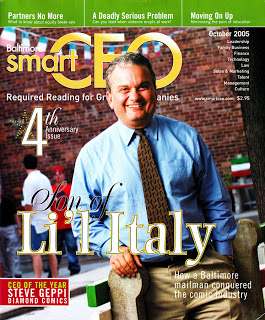 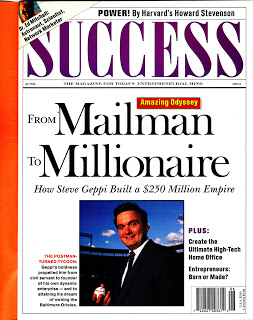 Steve’s office is a trip, by the way. It’s big and posh, yes, but it’s cluttered with stuff. Priceless stuff. Strewn about among other priceless stuff. Leaning up against the walls, furniture or the front of Steve’s desk. In piles here and there.

“What’s that?” You’d say, pointing at a painting partially hidden.

Oh, that, Steve said. He pulled it out and explained. It’s the original painting for Disney’s Snow White movie poster.

Lost among many other brilliant, one of a kind, irreplaceable, pieces of movie poster art.

None of these items were in any danger of being damaged, by the way. All were quite safe, carefully placed and gently handled. It’s just that there were so many of them they were parked here, there, wherever, presumably awaiting more comfortable quarters.

After much talk about the possibilities inherent in working together, Steve and Herman had gone about as far as they could pending more thought, research and work on a proposed plan, Steve said, “I have some interesting things in the closet, here. Do you guys want to see?”

Steve took us inside his office “closet,” which is bigger than my apartment.

Steve, if I recall correctly, once owned the first drawing ever made of Mickey Mouse, a concept development piece: 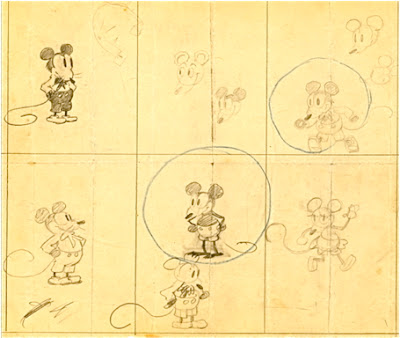 That art now resides in the Walt Disney Family Museum. But, Steve had other irreplaceable, related items, including the storyboards for the very first Mickey Mouse animated short, Plane Crazy. Plane Crazy and another Mickey Mouse short, The Gallopin’ Gaucho preceded Steamboat Willie, but never got distribution.

Steve showed us many fantastic things. Among his proudest possession were several books collecting original art birthday cards for William Randolph Hearst created by the cartoonists syndicated by his King Features. Each one was clever, brilliantly conceived and, of course, had amazing art.Contributors included Hal Foster (Prince Valiant), George Herriman (Krazy Kat) and Billy DeBeck (Barney Google and Snuffy Smith). Many more. All the great King Features creators of that era were represented.

I saw a bat leaning up against the wall in a corner. “What’s that?”

A bat Babe Ruth used in 1927, the year he hit 60 home runs, said Steve. Ruth used only eight bats that year. This was one that survived.

I asked Steve if I could touch it. Sure, said he. I picked it up. Took a few gentle cuts with it.

The amazing thing was how light it was. I expected a Richie Allen-type 40 ounce bat, or better. Nah. It seemed small and very light. No way it was more than 34 ounces. He hit 60 with a toothpick?I was in awe. Cool.

I got to swing Babe Ruth’s bat.