Friday afternoon, Chuck Rozanski picked me up at the Denver International Airport. My trip from Newark Liberty had been the usual ordeal. Maybe a little more so. I had to go through one of those full body scans. I’m sure the scan-pic will be on the web soon, so anyone so bored as to be wondering whether it’s boxers or briefs will know. We were held at the gate for a while because the aircraft maintenance people had to change a lightbulb. I guess it was an important one. So, we were late taking off and late arriving.
Therefore, Chuck had a long wait for me. As he was hanging around outside the secured area, he noticed a lot of military people also sort of hanging around. They had on camo pants and boots, but on top wore loose sweaters. All of them. No weapons showing. But these people weren’t just passing through on their way somewhere, they were on duty. Eagle-eyed Chuck also noticed TSA types scattered about, Denver and State Police here and there and people in civvies who were people-watching with intensity.
The Watchers noticed Chuck noticing them. A group of Watchers, trying to be discreet and failing, sort of surrounded him.
Then I showed up and we went on our way. Chuck pointed out the Watchers as we left. Wow. Was there a terrorist threat? Or was it just Christmas/holiday season precautions?
Anyway….
We went to one of Chuck’s warehouses. Chuck’s troops put me to work signing comics for online customers.
After a while, Chuck’s other weekend guest, Mike Kott showed up. Mike and his lovely partner Sue run the Intergalactic Trading Company.
http://www.intergalactictrading.com/
Mike is a long-time friend of Chuck’s—and mine, for not quite as long. A great guy.
Chuck took us to dinner at Hamburger Mary’s, a burger-lover’s paradise. Unbelievably great. Then we went to Charlie’s, an LGBT friendly bar to see a show.
The show was a benefit for Toys for Tots. Toys for Tots, as you may know, is run by the United States Marine Corps Reserves. Its mission is to provide Christmas toys for needy children. If you’re not in favor of that, you’re a Grinch.
The show was produced by two members of the Imperial Court of the Rocky Mountain Empire, a social and charitable LGBT organization.
Here’s a picture of me with Phantashe, a Baroness in the Court, one of the producers of the show and a star performer. “Pull my hair,” she told me. As you can see, I’m not a real aggressive hair-puller: 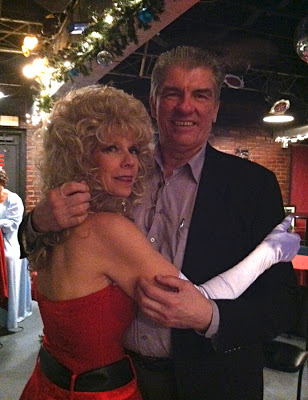 Phantashe’s co-producer was Dan Rutledge, the Emperor. A very nice guy. A gentleman of, indeed, Royal stature.
There were an amazing number of acts crammed into two hours. Some performers were gay, some straight, some in drag, some not. There were funny acts and serious ones. Some lip-syncing and some real singers. One young woman played the guitar and sang. Brilliantly. Twice.
Chuck donated a lot of money—and lest you think otherwise, these times are as brutal for him as they are for many. He also donated a mountain of new toys. Few things touch me more than concern for kids, so I was impressed.
They had a “fifty-fifty” raffle. Buy a ticket for a buck, win, and you get half of the raffle proceeds, the rest going to Toys for Tots. If you paid ten bucks, they’d give you a string of tickets stretching from the floor over your shoulder and back to the floor. And, of course, I’m a little over 6’7”. Hmm.
I bought a $10 string of tickets. I won. HA! Cheating, says I! But, I donated the winnings to Toys for Tots. I think anyone in that room who won would have.
The show ended too soon, Chuck, Mike and I went back to Chuck’s farm, and after a too-brief chat with Chuck’s wonderful, brilliant wife Nannette, I retired. Slept like a potato.
Morning comes early in Boulder, Colorado. City-fied potatoes like me probably couldn’t survive if we had to get up in time to wake up the rooster every day so we could milk the chickens or whatever the rustics do, but, I actually crawled out of bed before dawn and the day began, ready or not.
Good breakfast, then off to the Mega-store.
Chuck gave Mike and I a tour of the place. It’s part warehouse, part events venue and part retail outlet. It’s vast and spectacular. 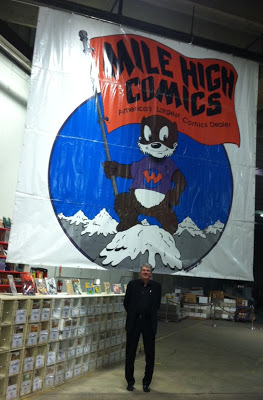 Perhaps he needs a bigger banner….
Here’s a picture of me with Chuck’s brilliant (of course), beautiful number one daughter, Rowan. I asked for a wallet sized print so I could show people back home that I hang with Hot Chix. 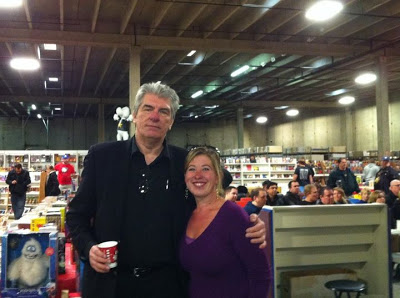 I didn’t get a picture, but another of Chuck’s daughters, beautiful, brilliant Tannith, #3 in a series of four, was also in attendance. Absent, due to being on other continents, were Aleta and Elsbeth.
I signed books at a brisk pace and talked with many people. Half a dozen or more people there admitted that they read this blog! A few said they found out about the event here. Glorioski!
Chuck asked me to give a talk. I said, “Chuck, there aren’t very many people here. I can talk to people one-on-one if they come by the table.” Chuck said there are lots of people! So, I went to the presentation area. There were, I don’t know, more than 100 seats. I’m lousy at estimating such things. Once Chuck announced that I was going to speak, the presentation area filled up! The Mega-store space is so big that it could devour an army! There were way more people there than I’d guessed! I did a Q&A for an hour or so. It was cool.
Back to my table. Chuck ran an auction in the presentation area. I signed many more books.
Besides me, Chuck had invited any creators who wished to come and have a table, free. Two guys took him up on it. Here’s a picture of me, Chuck and those two:
Apparently, I’m losing it, because I swear the guy who is not Scott told me his name was Phil. On Chuck’s site (where the photo came from) he’s identified as Cory. I don’t know.
Anyway….
Those two have created a yet-to-be-launched fantasy property that’s terrific. You should see the art! They got a lot of attention from the crowd. At one point, when I had a break and went to their table to see what all the fuss was about, I couldn’t get near enough. Later, as the event was winding down, I got a chance to talk to the guys. They’re nice guys and talented. Stupid me can’t remember the name of the property and didn’t write it down anywhere. Sigh. If anyone can supply that info, I’ll post it here.
While the show was still going on, I was whisked to the airport and made it home with no more than standard difficulty. And, once home, I slept like a potato.
NEXT:  Sex and Drugs, Really