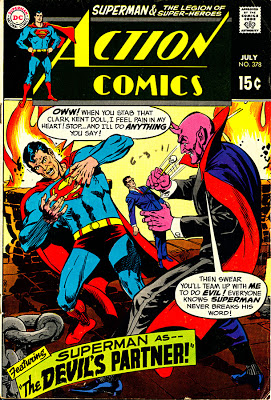 The story, MY story:
A very rare fruit from Planet Oomar in the Tenth Galaxy called the lotus fruit contains a highly addictive, psychotropic chemical. A nefarious miscreant, referred to only as the “Doctor,” controls the only source of the fruit in this galaxy. Through some ambitious machinations the Doctor manages to manipulate a Legionnaire—Timber Wolf, as it happens, but anyone would do—into drinking the distilled nectar of the lotus fruit. One shot of the concentrated nectar is enough to get Timber Wolf thoroughly hooked. 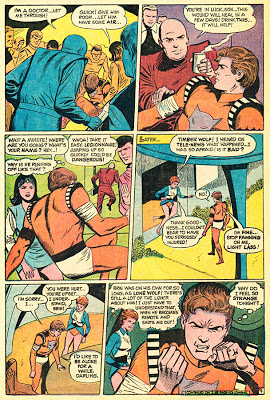 The Doctor’s plan is to get Timber Wolf to get other Legionnaires hooked, and then…? Who knows what evil lurks…. 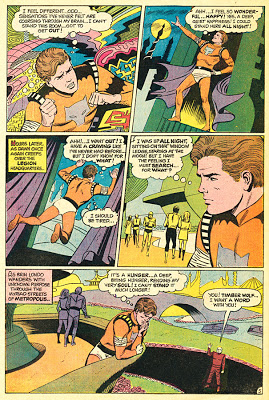 Timber Wolf is driven by his addiction to cooperate. He’ll do anything the Doctor asks in order to earn his next piece of fruit.
Timber Wolf offers his girlfriend, Light Lass, a lotus fruit, but something odd in his manner makes her suspicious. She refuses. 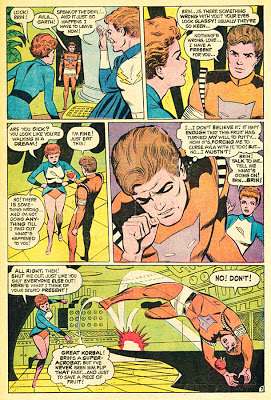 Light Lass clandestinely follows Timber Wolf, sees him eat the lotus fruit he offered her and witnesses its effects. Later, she follows him on his way to meet the Doctor, desperately seeking more fruit.
The Doctor offers Timber Wolf a big basket of lotus fruit if he will promise to share it with other Legionnaires. Timber Wolf would agree to anything at this point.
Light Lass uses her gravity manipulation powers to levitate the basket out of the Doctor’s hands and grabs it. She has come prepared. She places a sensor in the basket wired to a small explosive device on her belt. If it goes off, the blast will surely kill her, though the collateral damage will be slight. If one of the fruits in the basket is but touched, she dies. No one else will be harmed.
Timber Wolf almost takes a piece of the fruit he wants so badly, but cannot. Not if it means his beloved will die.
Timber Wolf summons enough willpower to resist his addiction long enough to strike down the Doctor.
Light Lass calls the police. Disarms the bomb. Yes, it was for real. And she allows Timber Wolf to eat a lotus fruit to end his suffering. She holds him, comforts him. Her faith in his love led her to risk all. His love for her saved her, and now her love for him will see him through the dark time ahead. He’ll have to go through a difficult rehab, but he’ll be okay, she knows it.
The End.
But that’s not how the story saw print. The Comics Code Authority rejected the story.
There was nothing specific about drug use in the 1954 Comics Code, still in effect in 1969, but there was a catch-all provision:
“All elements or techniques not specifically mentioned herein, but which are contrary to the spirit and intent of the Code, and are considered to be violations of good taste and decency, shall be prohibited.”
Drug use fell under that dictum, apparently. If you are not familiar with the 1954 Comics Code, it’s available in many places. Here’s one:
http://www.comicartville.com/comicscode.htm
So, Mort Weisinger and DC caved in. I had to rewrite the ending so that Timber Wolf was cured the second his love for Light Lass broke the spell of the lotus fruit. Here’s the last scene: 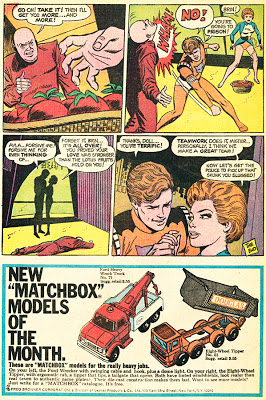