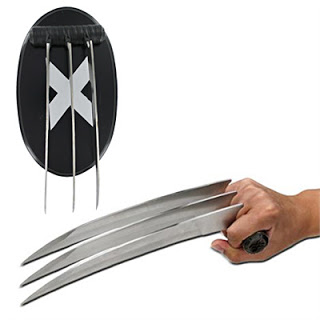 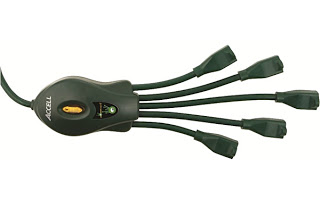 A gift I gave to myself. Power mad? Yes, I am.
Fatale
Fatale was an experiment in many ways. Fatale was created to be Broadway Comics’ answer to the “Bad Girl” trend, popular in the 1990’s. Being me, I wanted to do a Bad Girl who was every bit as extreme as those pneumatic vixens who led the charge but less puerile and more real.
Here is my introductory editorial: 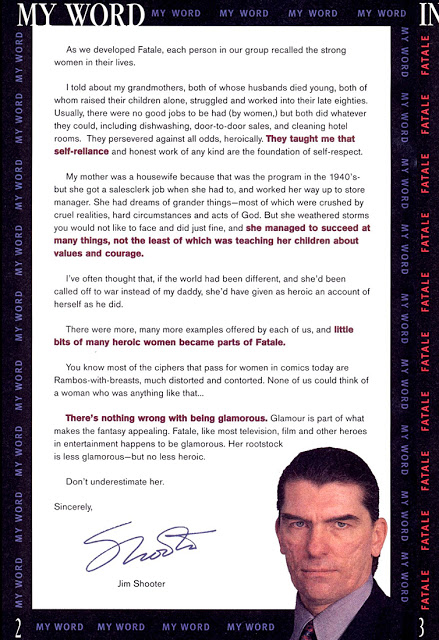 As explained in the previous post, Broadway comics were written TV-style, by four people working together. Two women among us.
We had so much faith in Fatale that we debuted her in the first Broadway Comics offering, Powers That Be #1 (starring Star Seed) and in the first two issues of Shadow State, our second series launch.
Here is the Contents Page of the first issue of Powers That Be, a title suggested, I believe, by Alan Weiss. 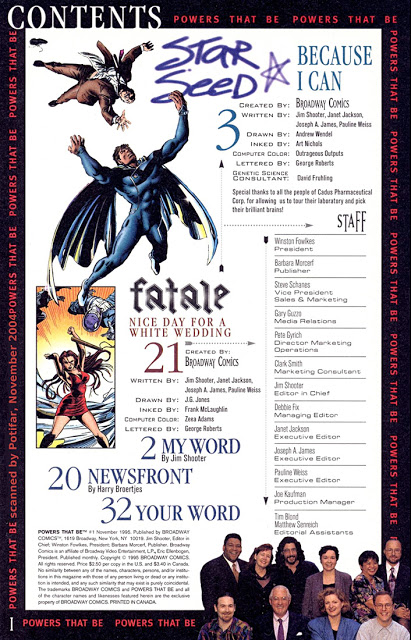 David Fruhling, “Genetic Science Consultant,” is a guy I played basketball with at the time in the Martin Luther King Jr. High School gym, which a group of us rented on Tuesday nights when I was less old and debilitated. The MLK, Jr. High School was on Amsterdam Avenue in Manhattan. David was/is a genetic science guy, super-smart, and generous with his time and knowledge. He gave me a tour of his company’s research facilities and explained the mysteries of life to me. No, not the birds and bees. That I knew. I’m talking genetic engineering, here. P.S. he could handle the rock and could hit perimeter shots.
(SKIP THIS COMPLETELY IRRELEVANT ASIDE: Not that anyone cares, but the aforementioned basketball group consisted of, besides David and me, a varied bunch of professional people—Mike, a publishing exec (and world class point guard), Jeff, the head of ad space sales for Playboy (in my estimation, the best all-around player), Rob (our best outside shooter), a notable photographer who once photographed Ronald O. Perelman and found him to be a total douchebag, Jim, a chemist (and great power forward), Danny, a dentist (a hot-shot fast-break artist), Steve, the Editor in Chief of High Times (an undersized but crafty low post/rebounder type), several lawyers, and other interesting, successful people. There was a guy named Andrew, a publishing entrepreneur, who was too good to be playing with us amateurs, but gave us a break. He let me foul him all the time and never yelled “I got it!” That’s what you say in no-official games where you call your own fouls.
Because I am ridiculously tall, I got a lot of rebounds and blocked a lot of shots. Played defense. I couldn’t shoot, couldn’t dribble and passed only when it was safe. But it was good exercise and fun.
Funny. Only point-guard Mike, who brought me into the group, knew my last name. On the court, he’d yell instructions like “Shooter, low post!” or “Shooter! Board!” After a couple of games the other players took Mike aside and told him to stop calling me “Shooter.” They thought he was making fun of me for not being able to shoot the ball….)
(A MORE RELEVANT ASIDE: Much has been made of the unorthodox package design of early Broadway Comics. Here’s the scoop: We were funded by Broadway Video Entertainment. BVE was the general partner in my 50/50 partnership with them, and BVE required that we use their favorite design firm, Monk Swing—yes, that was the company’s name—to create a distinctive look for our books.
Okay.  Here’s what we wound up with: 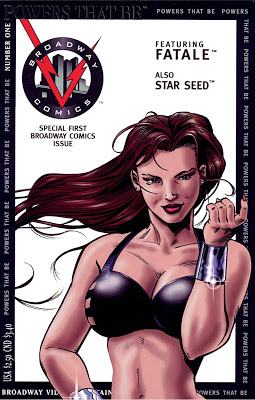 Our splash was a contents page. My column was on page two. Very magazine like. I suppose.
After a while, we finally got a little more control of the look of our books: 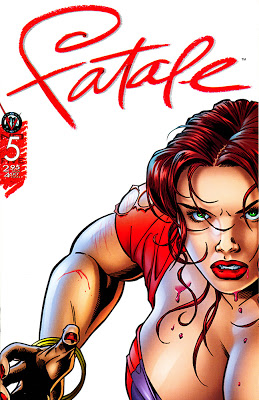 Better.
Back to Fatale.)
It seemed to us, the Broadway Comics writers, that typical Bad Girl characters walked onstage as fully formed, badass anti-heroes—over-developed “girls” who never developed any further.
Fatale, real name Désirée Hopewell, starts out as what her trainer, Duke, refers to as a “party girl.” She’s lazy. Flighty. Careless. She has a weight problem. She counts on her remarkable abilities to see her through every danger and difficulty. 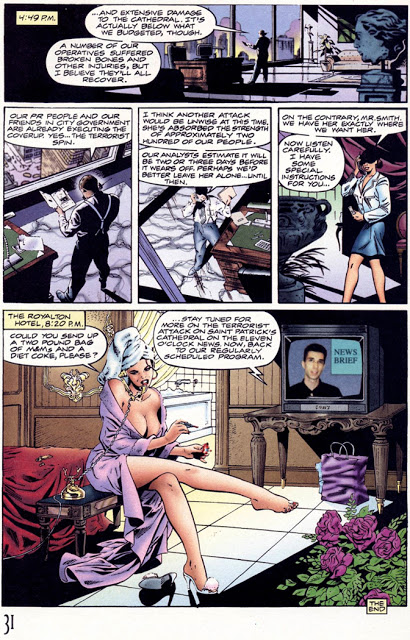 Yes, that’s Matt Senreich, a Broadway intern, on the TV. Matt grew up to become one of the producers of Robot Chicken.
We were pretty bold with the sex, sexiness and sexuality. 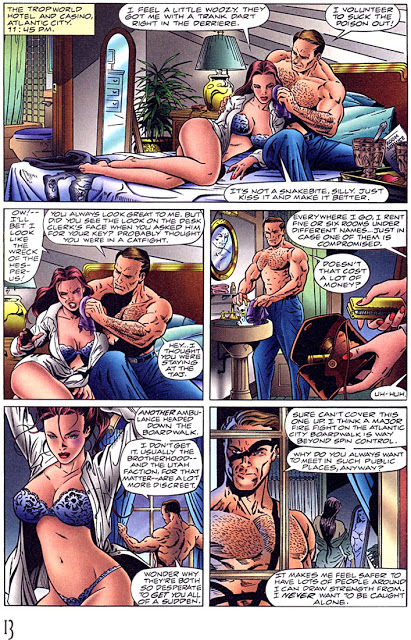 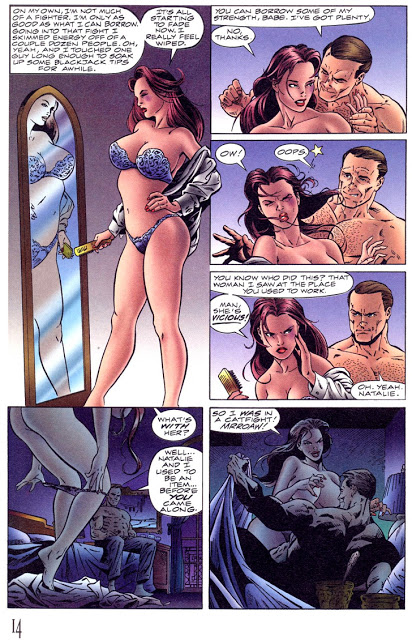 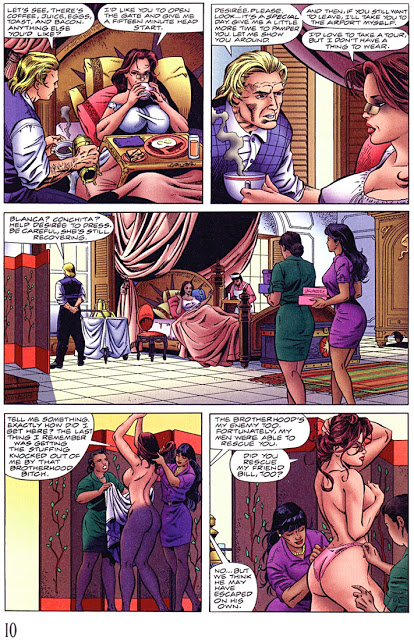 Even as a party girl, Fatale is no cupcake. 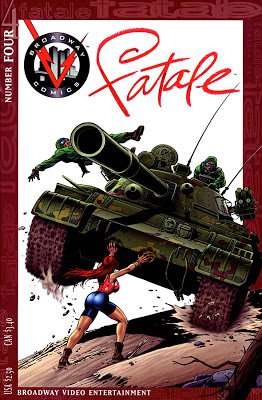 Ultimately, being a party girl doesn’t work out so well.
Fatale gets serious. 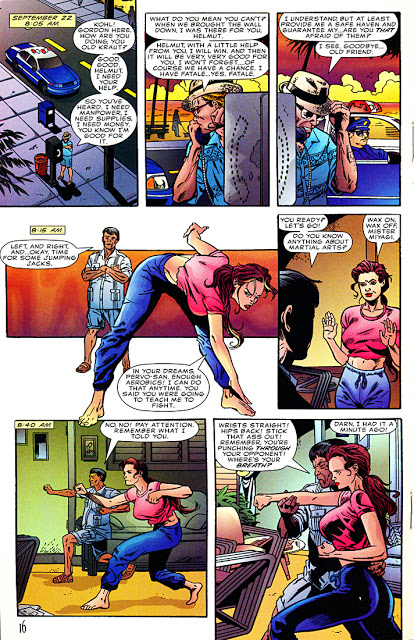 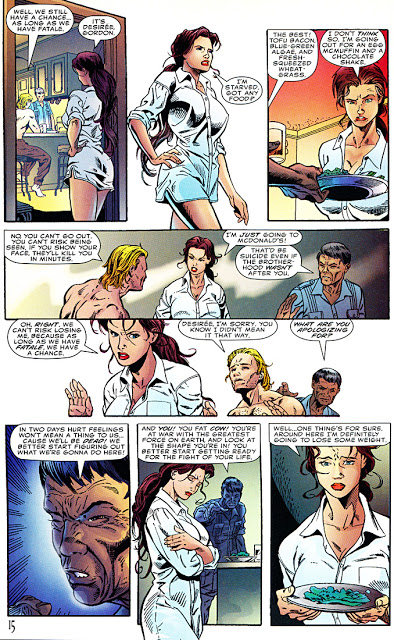 Fatale toughens up. When push comes to shove, however, she still “borrows” some skills from her teacher to fight the woman she thinks killed her friends. No fool she. No one becomes a world-class martial arts expert, like her opponent, with only a few days of training. 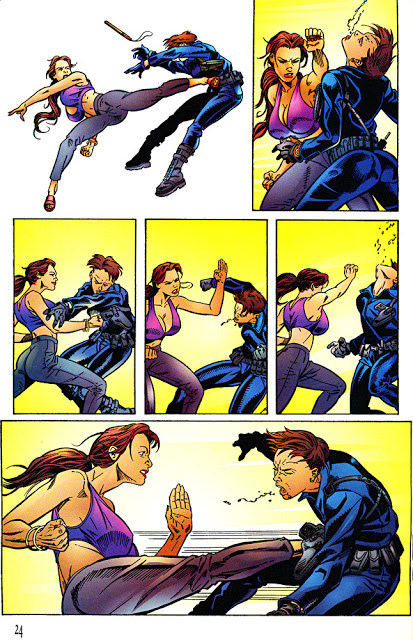 So, during the course of the three introductory short features in which she appeared and the six issues of her own series, she learns, she learns, she grows up, she develops, she gets stronger. She becomes responsible.

She fights those trying to steal her power and destroy her. She wins.

She ends up as the head of a secret, global power elite cabal, the de facto rulers of the world. She is their absolute mistress, Queen of the Planet. Heavy hangs the head…. 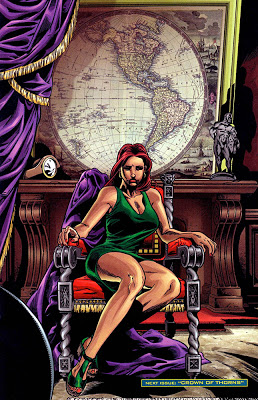 As an extra feature, we hired Harry Broertjes, a major league journalist, to write newspaper accounts of the events in Fatale and other Broadway Comics series. Here are a few: 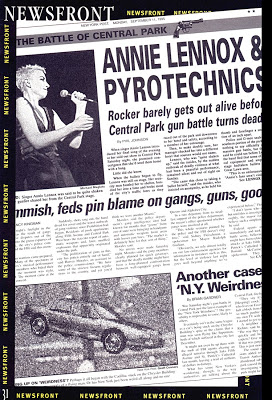 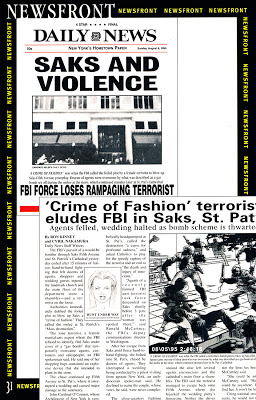 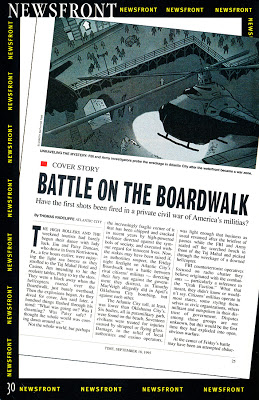 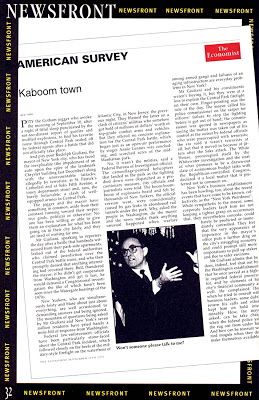 Harry, for his own amusement, wrote them in the styles of various publications. He’s goooood.
We had a zero issue origin story written. It was never published. Here’s the script. Sorry about the formatting glitches.
Download the Fatale 0 Script (99k)
JayJay created the Fatale logo using lipstick. Yep, lipstick. Broadway Video Entertainment’s chief graphic designer, Tony, contributed.
Dave Cockrum contributed mightily to Fatale’s design. Here’s a feature we ran about the creation of Fatale: 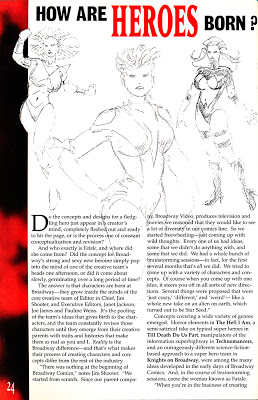 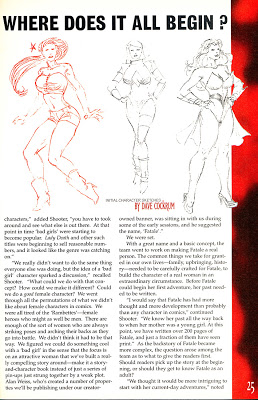 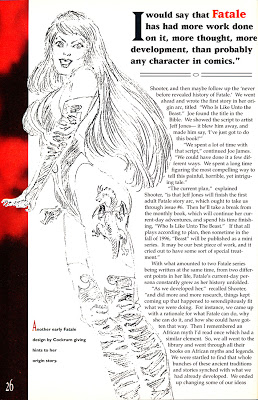 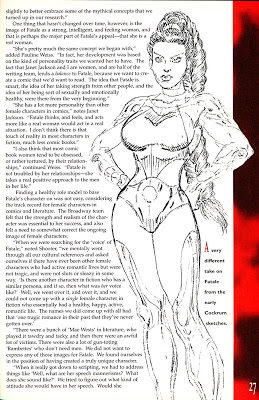 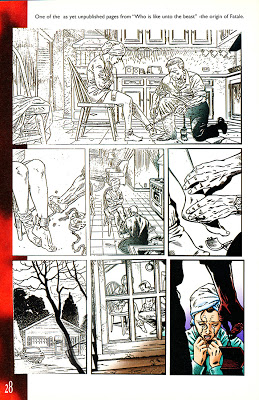 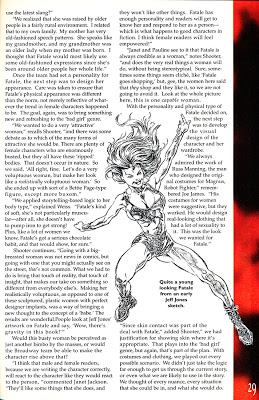 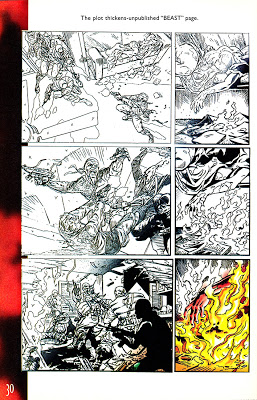 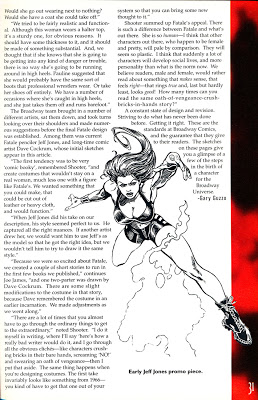 Star Seed was Broadway’s Superman, but Fatale was our favorite. Toward the end of Broadway, Fatale was really starting to take off. We published a trade paperback collection and a hardback collection. Two hundred and fifty copies of the hardback were signed by penciler J.G. Jones, inker Frank McLaughlin and me. The collections sold well. The signed and numbered hardbacks are still sought after, and go for some serious money. Chuck Rozanski auctioned one off while I was at his Jason Street, Denver Mega-Store for something near $300, an amazing bargain, I’m told.
We felt we had turned the corner, and that Broadway Comics was going to break out and rise up.
Then…along came a Snyder. I’ll explain tomorrow.
NEXT: Traci Adell and the WWF, Fatale on TV, and the Web of the Snyder