1) Long ago, before the mid-1970’s, everything at DC was done full script and nearly everything at Marvel was done Marvel-style, that is, plot-art-copy. DC drifted somewhat toward Marvel-style as some ex-Marvel writers filtered in. I don’t know how much full script is done by either company these days. Gail’s undoubtably right.
I write full scripts because I want my story told my way. Unfortunately, these days, many artists high-handedly ignore the script (that was approved by the editor) and draw whatever they please—adding panels, leaving out panels, changing events. Not only that, they make no allowance for the copy, which often makes for tortuous balloon pointers and/or rewrites to accommodate the pictures, because there’s never time for them to be redrawn.
In ancient days, artists working from full scripts were obliged to place the copy and usually rough-lettered it in. Worst of all, many artists these days have no storytelling skills at all, so even if they vaguely follow your instructions, they don’t do all the storytelling things that Kirby, Ditko, Ayers, Curt, Woody, Gil and almost all the elders knew to do to make the story clear at a glance. They did these things without being asked and without endless explanations (that today’s guys skip over).
Some newer artists do have a clue. Not enough.
I worked Marvel-style while at Marvel. It’s okay if you’re working with a good storyteller and a horror show when you’re working with an artist who, for example, has the climax happen between panels. No kidding. I’ve seen every kind of storytelling nightmare there is, even that. Artists totally missing the point.
2)  Some specific examples on the LSH story in question:
PAGE FIVE: Panel 6:  (the first shot of Invisible Kid.) I call for a full figure of Invisible Kid. I get a cropped figure. I ask for the setting to be made very clear. I get no background except sky. I say that some Ikonns may be seen in the background, but none close to Invisible Kid, close enough to strike him.  I get two armed Ikonns right behind him. I ask for Invisible Kid to have the bark-and-rope device in his non-ring hand, and provide a sketch of him about to slip it onto his ring hand, plus sketches so that it is absolutely clear to the artist what the device is. I get the device already on his ring hand at an angle that makes the device hard to understand. Not to mention that Invisible Kid, who is a short, slightly built guy, the youngest Legionnaire, is drawn like a ripped athlete. 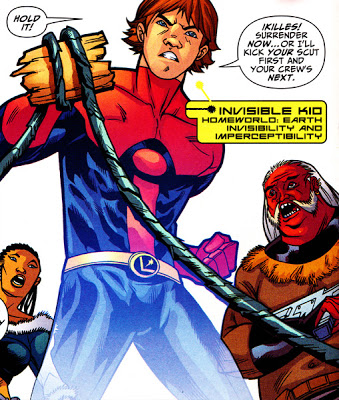 PAGE SIXTEEN: Panel 3: Here’s the scribble I gave the artist to demonstrate the angle I was suggesting: 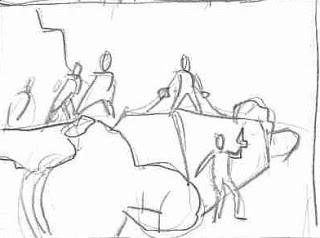 Here’s what he drew:

Similar, yes, but in the scene description I said:
“Remember also all the stuff on the Terrace—bound prisoners, various wreckage, Ikonns, Slaves, party stuff and, of course, the Central Temple. You don’t have to draw all of that, but remember that it’s there, and include whatever would logically be seen in the shot you choose.”
Looks pretty sparse to me.
PAGE SIXTEEN: Panel 4: The artist drew Ikilles talking with the wrong character. “Sadistic Ikonn” is male. He drew “Nasty Ikonn 2,” who was intended to be male, also, BTW, but he screwed that up.
The acting is terrible. Nothing about the body language suggests a “sotto voce” conspiratorial exchange. Their expressions also, are nothing like those described. And Ikilles looks very little like what Francis Manapul established in #43, by the way. 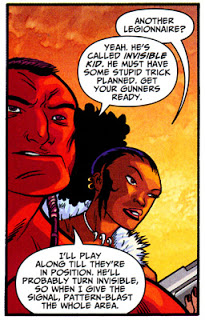 Panel 5: No snipers hinted at, the bark-and-rope device is not shown, as requested.  Cropped figures with indecipherable body language make the action mysterious. 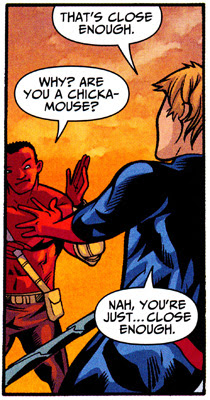 Sigh.
HERE’S THE REAL TEST: IMAGINE TAKING THIS PANEL (OR ALMOST ANY OF THESE PANELS, ANY PANEL IN THE BOOK) OUT OF CONTEXT AND SHOWING IT, BY ITSELF, TO SOMEONE UNFAMILIAR WITH THE STORY.  IF THEY CAN’T GUESS THE GENERAL DRIFT OF WHAT’S HAPPENING, THE ARTIST FAILED!
NO ONE LOOKS AT THIS PANEL AND GUESSES THAT THE RED GUY IS MENACINGLY STALKING TOWARD THE SMALL AND WIMPY LOOKING KID. THE RED GUY IS SUPPOSED TO BE MUCH BIGGER THAN THE KID AND BODYBUILDER-MUSCULAR, BUT YOU CAN’T TELL THAT HERE. NO ONE WOULD GUESS.
Ahem.
Now, imagine taking a panel out of context from an early-1960’s Jack Kirby book and showing it to someone.

Complex action, clear as a bell.
Doesn’t have to be Kirby.  Any good artist will do.  Look at this acting: 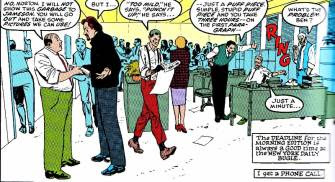 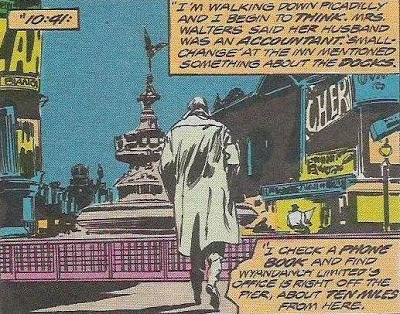 The right foot tells you he’s walking, not just standing. Gene Colan.
No matter how odd this one might seem to an uninitiated viewer, the acting is great, the expressions are perfect and clearly, the weird guy is juggling or levitating the fruit. Steve Rude. 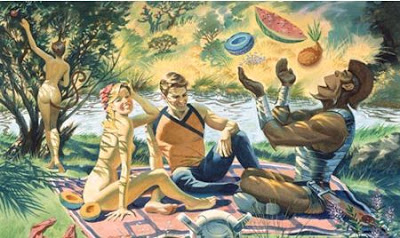 Anything Russ Heath did works. 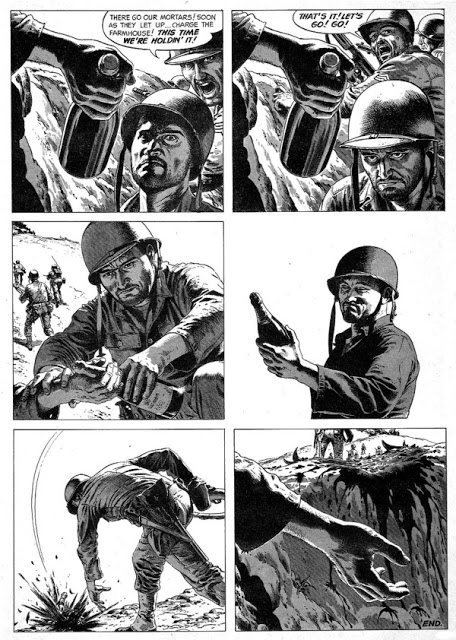 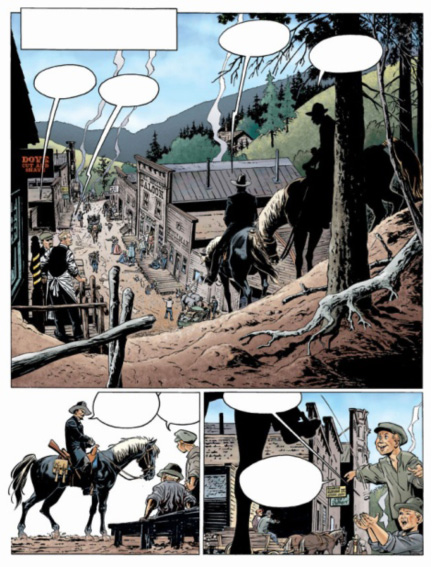 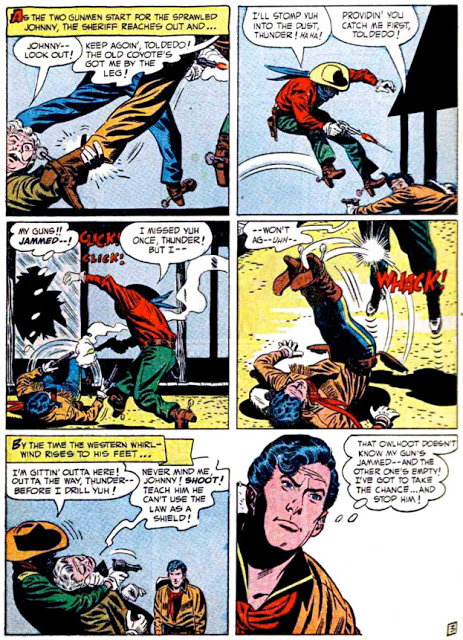 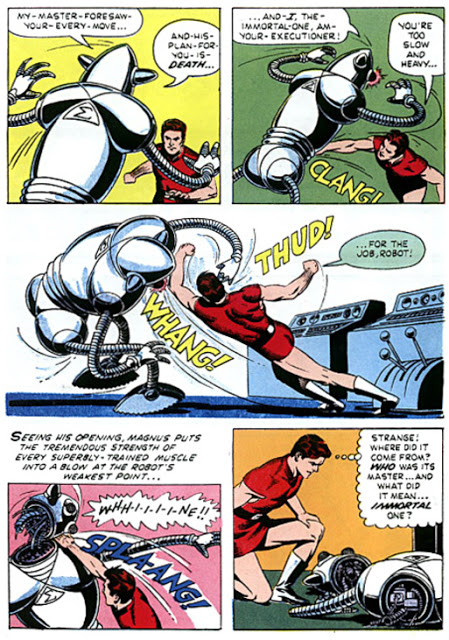 At worst with good artists, you need a panel or two of context to fully appreciate the event depicted. That is not to say each individual panel isn’t clear at a glance, and that a reader would easily discern what is presented therein, rather that greater meaning or increased significance is revealed by surrounding panels.
Enough of this. Regarding Legion of Super-Heroes #44, check the art carefully against the script and you’ll see how many mistakes were made, how many things were left out or misrepresented, how many things were arbitrarily or stupidly changed and how much of a train wreck the art is.

You still might not notice some things, such as the fact that the young woman seen in Panel 4 of Page Seventeen is supposed to be Light Lass. Note that the hair is wrong, her hand is mysteriously free of the ropes, the rope across her chest has become a fringe for her top and that she’s colored like an Ikonn. Which begs the question, why is her fellow Ikonn holding a gun on her? I think the alleged artist roughed in the panel, forgot what it was supposed to be, didn’t bother checking the script and finished Light Lass as somebody else. 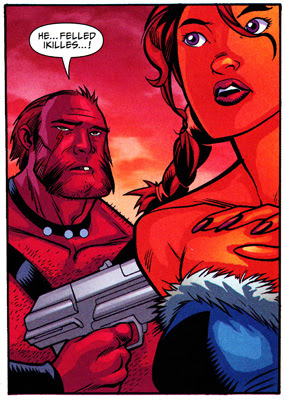 And you wonder why I get annoyed….
After comparing the script and art, then give it THE REAL TEST. It’s perfectly okay to cut that issue up in order to isolate panels to show people, it’s a worthless piece of crap anyway.
You may like the story or not (assuming you have access to the entire script and can discover what the story actually is), but the storytelling, especially in the action sequences, is amateurish garbage. Sorry to say so, Sanford. But not much.
P.S. Where were the editor and his assistant while my script was being butchered? Good question. Probably out cashing the paychecks they received for the jobs they weren’t doing.
NEXT: Wonder Woman – A Review