It occurs to me, duh, that I have not yet wished everyone a Happy New Year. Sorry. So, without further ado,
Happy New Year!

The last year has been a tough one for most people I know. Many are unemployed, almost everyone has struggled and only a very few have done well. Here’s hoping that 2012 will be better. And that planet Nibiru doesn’t crash into us on December 21st.

Thoughts for the New Year:

My Grandma Elsie quoting a mummers play:  “Take a drink from my bottle, let it run down thy throttle; rise up and strive again.”

John F. Kennedy:  “All of this will not be finished…even perhaps in our lifetime on the planet. But let us begin.”

I hope your holidays were groovy. Press on regardless.
What Broadway Video Entertainment Couldn’t Do

Much of anything useful.

Back in late 1994, I needed a gig. Eric Ellenbogen, President of Broadway Video Entertainment offered me one—partnering with BVE to start a comic book company, Broadway Comics.

One inducement Eric offered was that parent company Broadway Video had clout in the film and television arenas. With their muscle behind us, surely our comics properties would be on the big or little screens in no time.

So, how’d that work out?

As it turned out, Eric Ellenbogen and BVE didn’t seem to have much more clout than I do. I’m sure Broadway Video boss, Saturday Night Live co-creator and executive producer Lorne Michaels does, but we didn’t get a lot of his time or attention.

And, what does clout get you anyway? Meetings. Meetings don’t get shows produced.

The following things get shows produced:

Of the four factors listed above, money is the weakest. Unless we’re talking Bill Gates money. People assume that your money is dumb money. If you have to put your own money in that means that you can’t raise any, and that means that the smart money is steering clear. Major red flag. Look up Warriors of Virtue, entirely funded by the Law brothers, four cardiologists from Colorado, to the tune of $55 million.

NOTE THAT THERE IS NO MENTION IN THE LIST ABOVE ABOUT WHETHER THE PROPERTY IS ANY GOOD OR NOT.

Honestly, sincerely, THAT HAS NOTHING TO DO WITH IT.

If a property has exposure, heat or an A-list, bankable talent attached, “good” is irrelevant. The screenplay will be re-written anyway. Q-score, heat and especially bankable stars count. Pretty much nothing else matters.

The fact that most of the production financing decision makers—network and studio execs—do not have a clue about what is good or not so good. Nor do they care. “Good” is obviated by the first three criteria in the what-gets-shows-produced list. It just doesn’t matter.

Exposure? Groovy. Heat? Cool. And no one gets fired for green lighting a Travolta picture.

Broadway Video Entertainment got us some meetings. None I couldn’t have gotten on my own, on the strength of my own credentials. Except one, maybe, with top cheeses at Paramount. Bigger clout than I have got us that meeting. The meeting got us nothing. They weren’t the least bit interested in our Broadway Comics properties. Our properties were not yet well-known, not yet hot and Travolta wasn’t attached to any of them. And, no way was BVE investing production dollars.
At one point during the meeting Eric Ellenbogen said to the Paramount execs, “You think we’re just Jews with phones!” The point he was driving at was that they were ignoring the fact that we actually had some really good properties to offer. But, as stated above, that doesn’t count for anything. That’s exactly what we were, Jews and a few gentiles with phones. Nobody cared about the quality of the work.

It’s not as if super-smart, UCLA and Harvard-educated, Hollywood-savvy Eric didn’t know that. He was pushing the envelope of the clout-thing, squeezing all he could out of the UCLA and Harvard connection he had with the Paramount execs. They had similar backgrounds, and yes, there’s an alma mater-loyalty, cosa nostra-like thing that goes on in Hollywood enclaves. But, no luck for us.

We ended up talking about licensing their properties, like Beavis and Butthead, Ren and Stimpy and Aeon Flux.

So, what else did BVE’s clout get me?

A meeting with Guardian Angels founder Curtis Sliwa. Thanks, but no thanks.

And a meeting with the World Wrestling Federation.

I adamantly resisted any suggestion of doing licensed WWF comics. Been there, done that. Bad, bad, bad….

VALIANT, as you may know, was forced into a license to do WWF comics by my corrupt partner Steve Massarsky, who represented both Leisure Concepts International (the WWF’s licensing agency) and VALIANT. Can you say “conflict of interest?” Massarsky made a ton of money personally by making a deal with himself with utter disregard for what made sense for VALIANT, and I was stuck with actually producing WWF comics.

Working with the WWF at VALIANT had been a nightmare. They’d been uncooperative on every front. They honored none of their promises about helping us market our books. They were insane with regard to approvals.

No drawing we made of their wrestlers was ever adequate. The absolute worst incident involved a cover featuring the Ultimate Warrior that they rejected. I went to their offices in Stamford, Connecticut to argue. Their approval nitwits said his nose was too big. The Ultimate Warrior’s face, however, had been TRACED FROM A PHOTO. I, myself, had traced it. I showed them the photo. I showed them the tracing. I had a light box with me and proved that the tracing was exact.

No good. They insisted that the drawing was wrong, his nose was too big and the cover had to be redone.

I went back to our office and said, “Print it.”

The WWF approval nitwits later thanked me for making correx that weren’t made. 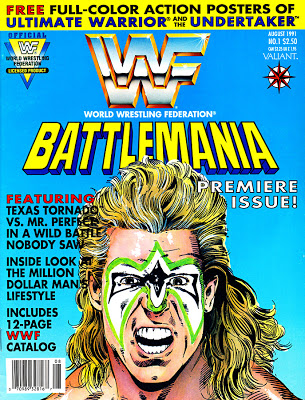 Anyway…back to Broadway Comics. Somehow or other, by dint of boundless enthusiasm and relentless persistence, we got Vince McMahon and his wife/partner Linda McMahon interested in the idea of using a live-action Fatale in their wrestling scenarios.

Well, all righty then…! 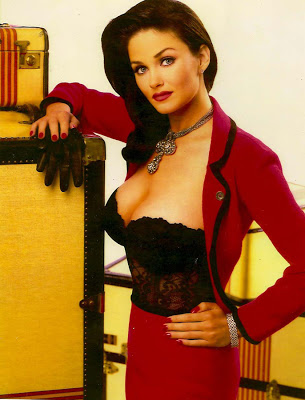