Honestly, at first, I went along with it mostly to hang out with those great guys again, having not seen them for years, but it turned out to be good fun in general.  After not doing cons for years, it was all new again. So many people come in costumes these days!  Don’tcha love the little kids in costume? Like micro-heroes from an alternate dimension.

Anyway, Mike, John and I did panels, signed books and told tales, etc. A lot of people showed me their work and asked for how-to advice.  I’d tell them as much as I could, but at a busy con—all of them were busy—you don’t have much time.  “Check out my blog,” I’d say. “You can find lots of info there.”  Well, no they couldn’t and they probably all think I’m crazy. All right, all right, crazier.

Anyway, there’s still some re-organizing going on, but everything that ever appeared on the blog is there again. If you can’t find something immediately, poke around a little. It’s all there. Elfasaurus Rex made it so. 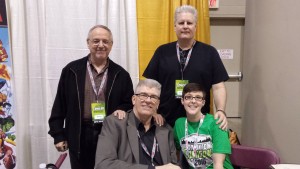