This would have been in 1990, by the way. Probably August. 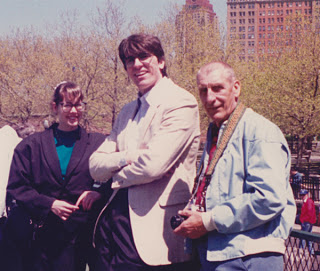 One problem. The only day we could make it was the day Herb was taking his daughter to college, in Syracuse, I believe. That’s about 140 miles from where he lived as the crow—or biplane—flies. He was already in for a long day. Loading up the car, driving, moving daughter in and driving home. Too bad. It seemed like such a good idea.

But Herb said, words to the effect: “You just meet me at the airport at eight o’clock. I’ll be there.”

I think that day, my father and I—and Bob Layton was with us, visited Barry Windsor-Smith at his house, not too far away. Barry made us an excellent lunch and showed us his studio. And he was really nice to my father. Thank you, Barry. It was great.

Then a station wagon came flying into the gravel parking lot sideways at about 90 miles per hour. That may be a slight exaggeration, but not much. Herb jumped out, said words to the effect: “Come on!” and led us sprinting to the hangar. Time for niceties later.

Before you know it, old Pops was in the front seat, Herb was in the pilot’s seat—both wearing those old fashioned leather helmets—and they took off into the wild, ever-deepening-blue yonder.

I think they were out for about half an hour. When they landed and the plane came rolling up, my father’s first words were, “I want one!”

Later, he told me that Herb did all kinds of tricks, rolls and loops and such. Perfect.

Herb managed to stretch the fading light long enough to take Bob up for a while and me up for a quick spin. He was conservative with me. I think he believed because I had turned him down so many times, I must be afraid of flying. Nah. I even went skydiving a couple of times, but that’s a tale for later.

Thanks again, Herb, for providing a highlight reel adventure for my father. He spoke of it often and happily till he died, eleven years later. 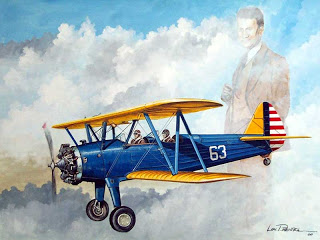 Painting of a Stearman Biplane