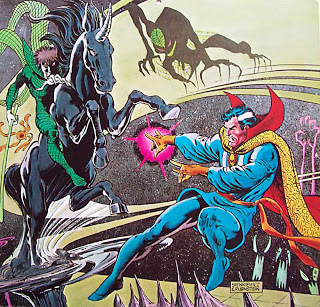 I was not going to let this guy leave without an assignment. I wanted him drawing for us, not traipsing around the city looking for work at other places. I scoured the joint for a script or a plot. Nobody had anything for Bill to draw.

So, I dug out a script that had been scrapped, because we didn’t like it. A Satanna story, I think. We thought it was unusable. Dead inventory.

I told Bill it was an important project that he was perfect for. Sent him off to draw it.

By the time he came back with that job, I had real work lined up for him.

P.S. We used that job! I think it was part of a mini-series that Bill ended up drawing. After he drew it, it suddenly didn’t seem so bad anymore.

P.P.S. One time he came into the office to deliver something and that day I needed a cover drawn in a hurry. I asked him if he could draw it on the spot. He agreed. We found him a table and some tools. A couple of times as he was drawing, I peered over his shoulder and watched. One of the most amazing things I ever saw was Bill drawing. So effortlessly brilliant. Wow.

P.P.P.S. Neal wasn’t doing much in the way of comics back then. Once, at a Chicago Con, shortly after a rare piece of Neal’s work came out—a cover, I think—somebody in the audience at a panel asked me who this “Neal Adams” guy was, and why he thought he could get away with copying Sienkiewicz’s style.

Bill obviously liked Neal’s stuff—who didn’t?—and followed his lead. I encouraged him to be himself, but I think he worried about doing a different style. One day he came to my office with a Moon Knight job he’d just finished. He seemed nervous about showing it to me. Thought I wouldn’t like it, because he’d moved away from the Neal-inspired style to something different.

It was amazing. And I told him so. He seemed pleased.

Then, he just busted loose. Wow.

Chris Claremont wanted to work with him on New Mutants. I knew that meant throwing down all rules, boundaries and occasionally common sense sometimes and dancing upon them, but, hey, we were Marvel Comics, and if we weren’t willing to experiment, who would?

Those were remarkable comics.

Young people learning the trade I made follow the grid, do the basics till they learned. But once a person showed chops like Bill had, or Miller had, the smart play was to let them go invent. And they did.

In 1986, Marvel’s 25th Anniversary year, I arranged for every single Marvel editor to go to the San Diego Comicon. I pitched this to the Con organizers: “Use this for publicity. Every single person authorized to buy creative work from Marvel will be there to look at samples. Tell everybody to come and show their stuff.” I also told them that we’d be doing publicity stunts to help get news coverage.

If you do a publicity stunt in an attempt to promote a commercial enterprise the news media will ignore you. But, since the events were planned to promote the cultural-event Con (and, oh, by the way, Marvel), there was a good chance that we’d get some publicity.

Bill wasn’t invited to San Diego that year, but wanted to go. Bill was athletic—probably still is, I haven’t seen him for a while—and just the right size for the Spider-Man costume Marvel used for its character public appearance program (things like the annual Easter Egg Roll on the White House lawn).

I told Bill that if he’d wear the costume for a few events, Marvel would pay for the trip, all expenses. Save him significant dough. He agreed.

So we went and tried to get some attention. I brought a professional photographer along.

The Con organizers ignored me. No attempt to get publicity whatsoever. Screw Marvel and its 25th Anniversary. Because we were successful? Or was it something I said?

Nonetheless, we followed through. We rented four convertibles to get us around. We hired a plane to fly over the city pulling a banner that said “Marvel Comics, Still Flying High!”

Bill, in costume, had his picture taken in the plane.

We went to the beach and did a photo shoot with a pad on an easel in the shallow water and with all of us with our pant legs rolled up, standing in the gentle surf—an “editorial meeting” for a promo photo for the upcoming Sub-Mariner limited series. Bill was in costume.

On the way there, the police pulled us over—because they saw Spider-Man in one of the convertibles! Bill had his picture taken with the cops, sitting on one of their motorcycles.

We rented tuxedos for everybody. Louise Simonson looked spectacular in a tux. Mark Gruenwald cleaned up real nice, too. Who’dathunk it? I looked like a gawky groomsman.

Then we all went to Seaworld to have our pictures taken in the penguin building to promote the upcoming Iceman limited series. I had previously arranged this stunt with the Seaworld PR people. They told me to ask the gate guard to call them when we got there.

Seaworld reneged. The gate guard called the PR office, said “uh-huh,” and told me that they had instructed him to make sure we all paid full price to get in.

When we got to the penguin building, we were refused entrance. We were told that we might disturb the penguins.

Okay. Maybe 14 or 15 people in tuxes, plus Spider-Man (Bill) and a photographer might upset penguins. Dunno.

So we had our picture taken outside the penguin building by the sign.

As we were leaving the park, word had apparently spread that SPIDER-MAN was in the park! We were MOBBED!

Seriously, an amazingly large crowd surrounded us, and by us, I mean Bill. I never before noticed so many Spider-Man tee shirts, but there were hundreds of them. Hundreds. No exaggeration.

And here’s the point of the story:

Bill started performing. Bill, to my knowledge and experience to that point, was a pretty shy and quiet guy. Not one for snappy patter. But, with the costume on, he WAS Spider-Man. Far better than any actor who’d ever worn that costume.

Bill was jumping around. Striking Spider-Man poses. Laughing, joking, daring. Making wisecracks. In perfect character. Doing backflips off the top, the TOP, the backrest of a bench!

No prior gymnastics experience as far as I know….

Finally, the only way we could escape was for Bill to duck—make that leap, cartwheel, tumble—into a men’s room and change into his secret identity!

As we were leaving the park, the entire Seaworld management staff came running—RUNNING—after us, pleading with us to come back. I told them to go to hell.

We also went to Disneyland. I don’t think Bill was in costume for that one. Might be wrong.  Dunno. Had our pictures taken with Mickey and Minnie. 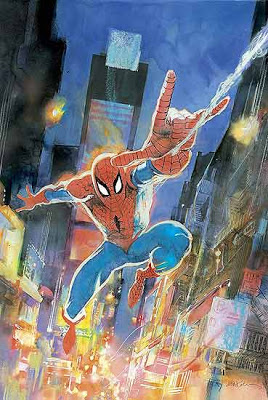