Storytelling Lecture Series, Part 14 (Edited from the transcript of a 1994 seminar) 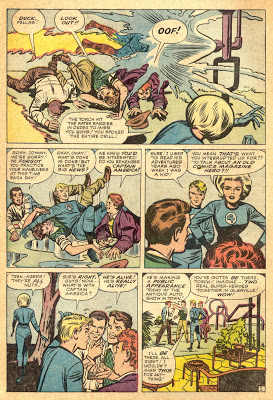 Take a look at the second panel. 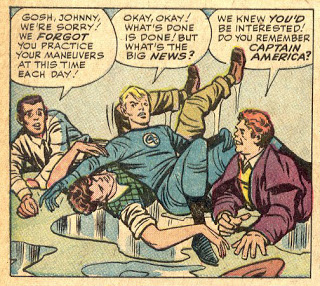 The boys have landed in a heap. In order to make that clearly, Kirby treats it like action, that is, he uses the usual action depth and shows us full figures, or nearly so.

When I say “action,” by the way, I’m referring to action in the theatrical sense. Action doesn’t always have to mean punching somebody. While I’m at it, “depth” refers to the distance from the camera, our point of view, to the featured element or elements of the panel. 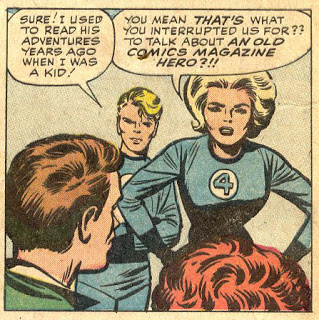 This is all reaction/interaction. It’s just people interrelating. Nobody’s jumping, or running, or even lying in a tangled heap. So what does Kirby do? Once again, he goes with the standard point of view for such things, close up, so we can see the faces well. So, there it is. Look at that body language. Is she peeved or what? You don’t have to read the balloon to know that. Every panel, every time, if it’s possible, Kirby gets across the emotions of the characters in the picture.

Take a modern comic you haven’t read, flip through it, don’t look at the words and try to guess what the characters are feeling, what they might be saying. Then read it. Then, I think you’ll appreciate Kirby’s skill even more. 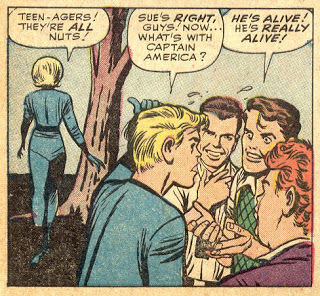 Here you have the same situation as in panel one, action in the background and reaction/interaction in the foreground. You’ve got action back here, Sue walking away. Kirby shows that full figure, not cropped, at the depth that’s usually best for action. See the bottom of her foot? See her body position? It is absolutely clear that she’s walking away.

Up close, this is interaction, again at the prescribed depth. Look at the body language. Johnny’s expression and gesture says, “What’s up guys?” even if you don’t read the balloon. The guys look excited, don’t they? “Hey, Johnny you got to see this.”

This was inked by Dick Ayers, probably with a ten penny nail in a hurry. Like I said, you had to go fast to make a living. But it’s clear and effective, isn’t it? A lot of inkers these days getting paid big bucks noodle up the art like crazy but aren’t effective and don’t make things clear. 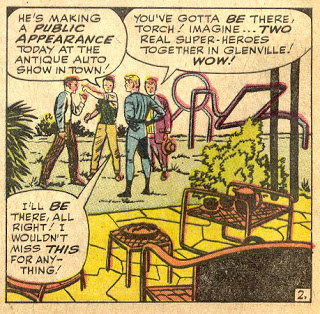 Remember I said you could violate the “rules?” Here, these guys are just talking again. If you go by the usual approach, wouldn’t you show them close up, interacting, showing faces and expressions? Well, Kirby just did a panel close up. Kirby is a good artist. He says to himself, “You know, those aren’t really rules. They’re just kind of general guidelines, and I just did a shot of these guys close up. It’s the end of the scene. Yeah, I can do that thing where you’re like pulling the camera back as your leaving the scene, “dollying out,” as they say in the movies.” That kind of thing. He says “Yeah, but I still have to show them talking. I still have to get across the sense of what they’re saying.” And, look, he did it. Look what he did. He gave them big gestures, body language that can be understood at a distance, to get across the general sense of their interaction. Look. You don’t have to read the balloons to know that the guys are saying, “Come on Johnny,” and Johnny is saying, “Gee, I don’t know.” Check it out.

There’s a scene in Rocky like this, a rule-violator. After Rocky is offered a shot at the champ, there’s a scene in which the Burgess Meredith character…Mick? comes to Rocky to ask if he can be Rocky’s manager. Mick hated Rocky for being a pug, for failing to live up to his potential, and most of all, for working as a leg-breaker for a loan shark—(though, by the way, Rocky was a failure at that because he wasn’t vicious enough). But managing a contender is Mick’s last chance for glory, so he comes to Rocky’s apartment, hat in hand. It’s the first time’s he’s ever been there. He pleads with Rocky to let him be his manager. Remember that scene?

Rocky is getting revenge for all the mistreatment he ever got from this Mick. He tells him to get lost. That scene, in the apartment, is filmed mostly close up and what Barry would call close medium—as you’d expect. Very intense, emotional stuff.

Finally, Mick gets the drift and he leaves, and shambles away, a broken man.

The next scene is shot from a distance, from across the street—a rain-soaked street. You see Mick shuffling away. You see Rocky’s door open, he comes down the stairs, he runs over to Mick, catches up with Mick, puts his arm around the guy’s shoulder, shakes his hand. All big gestures that you can understand at a distance—he relented and he’s hiring Mick as his manager. All big gestures and body language. All you hear in that scene is music. No dialogue.

I think that was basically because Stallone couldn’t possibly write dialogue good enough. That’s one. No offense to Stallone. No one could write dialogue better than what the body language expressed. Number two, he just did a scene real close up and intense, so the contrast really helped to set that scene apart, to emphasize it. There are no rules folks. There are some generalities—useful tools, storytelling standard operating procedures that we’ve learned in the century-plus of the development of visual/verbal media. Use them and also learn how to change up, how to violate those rules.