Storytelling Lecture Series, Part 15 (Edited from the transcript of a 1994 seminar) 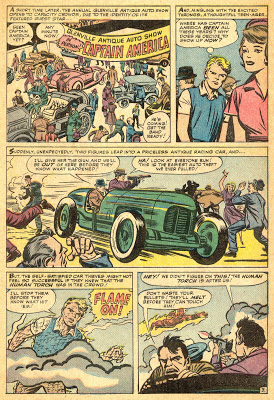 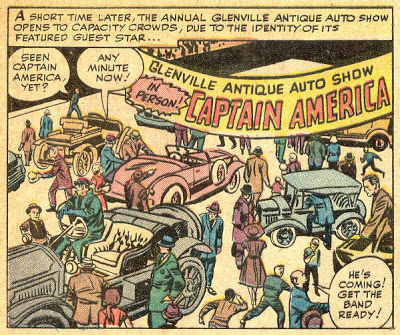 If you look carefully, you can see Johnny in the lower right hand corner. That’s Kirby ”telescoping” again, establishing our featured character’s position within the location. This really needed two shots, but remember, Kirby had fewer than 100 panels to tell this story, and he compromised here—probably hoping that Stan would mention Johnny’s presence in the caption. He didn’t. And the colorist colored Johnny’s shirt wrong. Oops.

Don’t be too hard on the colorist. This work was done at a time when colorists were getting 50 cents a page. He was in a hurry. I forgive him. 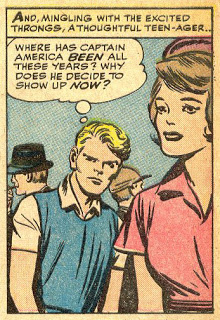 All right, so now we go right from Johnny very small to a close up. Why did Kirby do that?  Why do you suppose he did that? Well first of all, Johnny’s wearing different clothes. The only shot we have at recognizing him is seeing his face. Kirby also throws in the gratuitous sex object no extra charge.

Establish the location, locate your featured character or characters within the location, establish and introduce the character….  Because this is a comic book, with limited space, telescope if necessary.

Okay, action happens. The camera comes back to that action depth, that medium shot depth. In this case the actor is a car—with two guys in it—but the theory is the same. Pull back, show full figures, that is, the entire car. 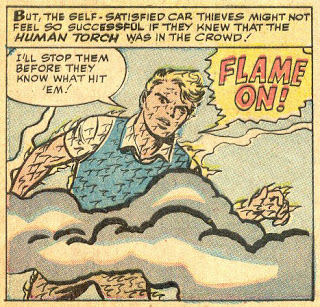 Johnny flames on. Notice the similarity between his pose in this panel and his pose in panel two. No accident. Kirby took the trouble to show him flame on. He didn’t cut right to a shot that showed him entirely aflame. Why? Because, so far, you’ve never seen Johnny flame on before. Kirby wants you to understand it.

You are communicators first. Make it clear. Introduce concepts—like flaming on, the transition between human and fiery super-hero—just as you would introduce a character.

I’ve never heard anybody complain that a comic book is too clear.

So Johnny flames on and now we see, supported by the same body pose here, that this guy is the Human Torch, and that’s what he does. 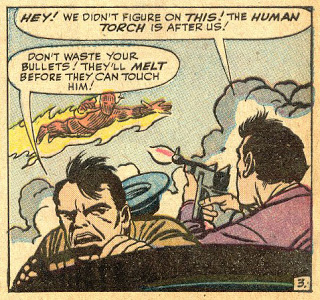 This Kirby guy knew his stuff.