Storytelling Lecture Series, Part 17 (Edited from the transcript of a 1994 seminar)
JayJay here. The blog service has been down and I have a few things that Jim wants me to post so I will be putting up several extra articles later today and tomorrow. Check back! 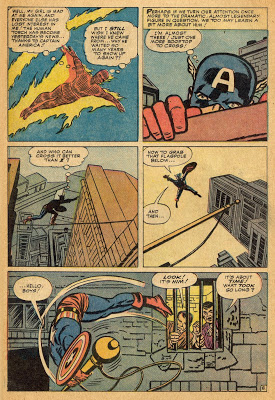 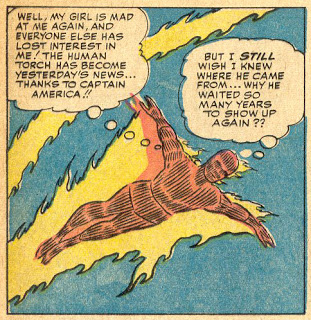 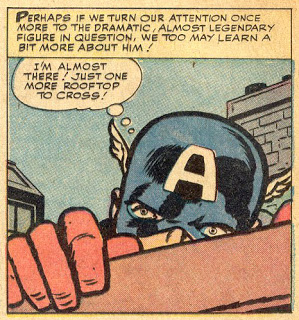 Here’s the first time in the book where Kirby does not open with the establishing shot. He opens with a close up. This is a cinematic technique called “pull back to reveal.” He starts off real close. He still gives you little hints and details that tell you you’re on a rooftop. But look at this. With half the guy’s head and part of his hand you know he’s skulking on a rooftop. 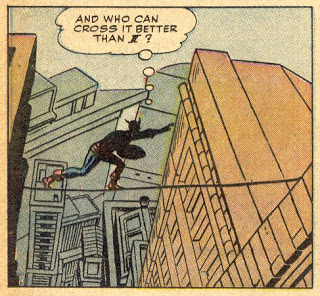 Kirby pulls back to reveal that Cap’s way up here, above the city. Crossing a wire.

When little Jimmy read this in a barber’s chair back when I was 11 years old I said, “Wow, cool! He’s going to fall!” 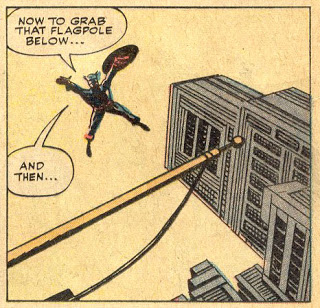 Now wait a minute, last page I said, “Hey, Kirby didn’t want to repeat the same thing so he changed up.” Well, look at this. Here are two panels with two silhouette figures the same size in panels side by side.

“Page design” is priority #14, or #36, or whatever you want, but #1 is telling the story. Don’t let ANYTHING compromise the story. Like I told you, there are guys who get away with it, putting other things before storytelling.

I can hear you thinking, “Hey I know of a guy who makes a million bucks a year who doesn’t tell a story.” Fine. No one can teach you that, being glitzy enough so that people buy your stuff even though it’s vapid. Glitzy and glamorous, a series of pin-up shots that convey little, the flavor of the month succeeds once in a while. That’s luck. That’s a fad.

Do what I’m telling you and learn to draw, and you will always have work. For at least forty thousand years, good storytellers have made a living.

Action happens, full figure on Cap. This is interesting. The action takes place outside the jail cell, but he’s got to show these guys, the criminals, close enough up so we can recognize them as the robbers and see them react. He gets it done.