John did some nice design sketches—performer’s attire that looked just super-hero enough.  The part that Tom delivered was pretty standard.  She was a young woman who dreamed and struggled to become a star, born with a “gift,” like the X-Men.  She found she could use her powers openly while performing, under the pretense that it was some kind of stage magic, a closely guarded trade secret.  Tom wanted to name her “Evelyn Free.”  “Evil ‘n’ Free,” get it?  That didn’t seem appropriate and no one liked it.

Tom was in love with that name and ever thereafter was looking for a place to use it.  I don’t know if he ever did or not.

And nothing much happened after that….

Until one day, later in 1979, I was called to an impromptu meeting upstairs.  Present were Alice Donenfeld, President Jim Galton and our Hollywood rep whose name escapes me.  They seemed pretty excited.

Alice and the rep had met with Neil Bogart of Casablanca Record and Filmworks who not only was interested in the “Archies” type recording venture, but wanted to launch it with a half-hour animated special.  Cool.

Bogart wanted lots of Marvel heroes in the special and he wanted the stars he had under contract to provide voices for the non-Marvel characters.  There had to be, therefore, characters to play for Robin Williams, Cher, Donna Summer, Rodney Dangerfield, Lenny and Squiggy, the Village People and KISS.

They had a follow up meeting already scheduled with Bogart.  They needed a treatment for the story in four days.

I was told I could hire anyone I wanted.  Price, no object.  The Hollywood rep, who could not have named a comic book writer if his life depended upon it, suggested Harlan Ellison.

The idea that Harlan could be brought up to speed, do the thing in four days and agree to do it work for hire—it had to be work for hire, I was told—seemed unlikely.

Better, I thought, one of us comics guys.  But who, in four days?  Archie would have been my first choice, but…four days?  Fast was not one of Archie’s strong suits.

So, I did it.  For free, by the way, over a weekend.  If I was going to be the fool who blew the deal, I didn’t want to be handing in a bill at the same time.  What I wrote is posted below.

The treatment was presented to Casablanca and Neil, and the verdict came back, quoted to me by our rep, “This isn’t a half-hour special.  This is a FEATURE FILM!”

And it would have been.

However, around that time, Bogart had health issues, Casablanca was being bought out and accounting improprieties were being alleged.  The project fell into limbo.

But Marvel owned all rights.  Casablanca had no investment, no stake whatsoever in the property or my treatment.

Alice went to the Cannes Film Festival in May of 1980 with my treatment in hand.

She managed to take a meeting with Bo Derek, and got her to read my treatment.  On the basis of my treatment, Bo agreed to become attached to the project.  She wanted to play Dazzler.

There’s a picture of Bo and her Husband John taken at Cannes that was featured on the cover of People Magazine, shown below.  If you look closely, you can see that John is holding a stack of Marvel Comics.  That’s the first issue of She-Hulk on top. 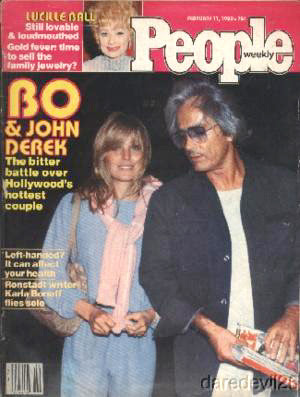 Stevens ignored what I had written completely and wrote a piece of crap that defies description.  In those days, despite the reasonable success of the first Superman movie, comics were still thought of as silly and campy, so that’s what Stevens went for.  It was moronic.

Stevens also discarded the light powers and gave Dazzler the power to make people tell the truth.  Why the name, then?  Oh, well.

Bad news part 2:  At the height of the bidding war, Bo Derek decreed that her husband, John HAD to be the director.  Famous for behind-schedule, over-budget debacles, John Derek had to direct or no Bo.

Later, Marvel tried to shop the Leslie Stevens script around with Daryl Hannah attached.  No takers.

P.S.  Later, noting the strengthening of the still-fledgling Direct Market, I proposed to Galton that we publish a Direct Market exclusive issue.  Around that time X-Men and other top performers were selling around 30,000 copies in the Direct Market, in addition to their newsstand sales.

The Sales Department resisted, fearing angering the I.D. Wholesalers (the newsstand distributors).  The compromise was that we would use a lesser known character, rather than a top seller, which the newsstand people might pay more attention to, and might be upset by.

I picked Dazzler.  I figured that would provide a good test.