Editor Larry Hama had been working on a reactivation of Nick Fury.  He had a lot of ideas.  Fury as the head of a top secret, elite strike force, a headquarters in sub-basements below the Chaplain’s quarters.  I think.  Anyway, he had a lot of stuff going.  At some point, he’d told me what he was working on.  But I don’t think it was ready to go yet, and we hadn’t yet committed to it—that is, I hadn’t circulated a new project memo and scheduled the thing.

It was downtown somewhere.  Not at Hasbro’s toy district office.  Way downtown.  I don’t remember exactly.  Their lawyers’ offices?  I don’t know.

Anyway, there were a few people from Hasbro present, boys toys execs.  Bob Prupis was there I think.  Could be wrong.  I don’t think anyone from Giffin-Bacal was there.  Could be wrong.  They were all eager to meet the Editor in Chief that Galton had apparently highly touted.

They showed me what they had.  A logo: “G.I. JOE, a Real American Hero.”  That was about it.   They didn’t want to revive the big doll.  Yes, I know it was verboten to use the word “doll,” and I didn’t in front of them.  They were thinking about three and three quarters inch figures, like the Star Wars figures, but they hadn’t even settled on that yet.  And they wanted a line of figures, not just one.  Someone said, “So, besides G.I. JOE, do we have G.I. George, G.I. Fred…?

I said how about if “G.I. JOE” is the code name for the unit?  Call in G.I. JOE?”  They liked that.  I also said it should be an anti-terrorist team.  Not a “war” toy.  That was obvious to everyone, I guess.

They were sold.  They wanted us to proceed and develop a concept.  Everybody shook hands and Galton and I took a cab back uptown.

Later, Marvel’s licensing and business affairs people worked out the deal.  More on that later.

Back at the Marvel, I went straight to Larry’s office.  He, with his military background, was the obvious choice to do the heavy lifting.  I told him what happened.  He thought, and I agreed, that much of what he’d already cooked up for Nick Fury could be adapted to the project.

G.I. JOE seemed important enough that I wanted to involve Archie, who by my reckoning was our best.  I assigned Tom DeFalco as editor of the book-to-be.  The four of us represented Marvel creative.

It was really all Larry from that point.  The rest of us maybe kibitzed a little, but all significant creation, all the real work was done by Larry.  There were only two contributions, I believe, that were not Larry’s, one minor and one notable.

The minor one was mine.  Larry wrote the outline that was the basis for the series and, essentially, the plot for the first issue.  He wrote it like a regular Marvel plot, straightforwardly, just the facts.  I knew it had to be a pitch piece as well as a plot, so I rewrote it into a more dramatic presentation.  I changed not an iota of substance—I simply amped up the sturm und drang.  Hasbro loved it.

We had a meeting or two, I think, with Hasbro people in New York.  We definitely flew up to Pawtucket further along in the development to see their prototypes and discuss the launch plan.  Possibly Mike Hobson was with us on that trip.

They explained the rollout.  They didn’t plan to have any villains in the launch.  We protested.  “Who are they going to fight?  They need bad guys!”  Archie pitched his bad guy concept.  The Hasbro people resisted on the grounds that villain action figures “don’t sell.”  We persisted.  Finally, they caved in and included one Cobra figure.

Later, by the way, villains became 40% of their volume.

At some point along the way, we asked for female characters to be included in the line.  We had women in the comics, and it seemed odd that there were none (or very few) among the toys.  “Female action figures don’t sell,” we were told.  I suggested that they include female figures with the vehicles. That worked.  I probably wasn’t the first one to suggest that.

Every year, the Hasbro boys toys team would come to Marvel.  On our conference room table, they’d spread out a bunch of prototypes and design drawings.  Sometimes they’d show us naked gadgetry—the mechanical underpinnings of something that would hop, spin, flip, crawl or whatever—without a clear notion of what it might be used for.  Larry would create an appropriate vehicle or weapon to use the technology, usually on the spot.  Hasbro would explain some new marketing tack or characters it intended to introduce and Larry would find a way to make it work.

It got to the point that I stopped going to the meetings.  Larry had it all under control.

Back to Marvel’s deal with Hasbro.  Per the deal, Marvel did character and story creation.  Marvel published the comics.  Marvel Productions created the animation.  For the first year, Marvel handled the licensing of the property for ancillaries.  We did a pathetic job at that, so after the first year, Hasbro took the licensing away from us and did it themselves.  They hired away one of our licensing people, however, a woman named Leslie, whose last name I forget.  Sorry.

As part of the deal, Hasbro ran TV commercials ostensibly promoting the comic books, but not really.  Merely collaterally, in fact.

Toy commercials were heavily regulated at the time (probably more so today).  Use of animation was severely restricted.  Actual children playing with actual toys for a certain percentage of the spot was required.  Etc.  However, there were no regulations whatsoever governing the advertising of comic books.  By making “comic book ads” that were, in fact, thinly disguised ads for the toys, Hasbro circumvented regulation.  And those were some exciting ads—the best toy ads on TV.

All in all, it was a mutually beneficial deal, at least for the comics. 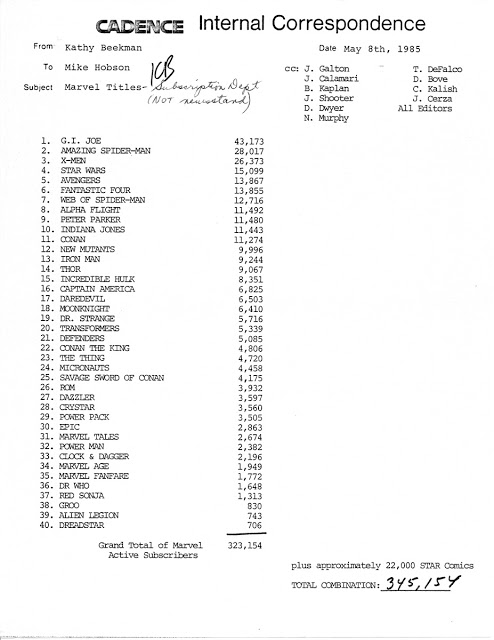 Marvel Productions, however, overspent on production, and since MP was a W4H supplier it had no share of the back end.  They lost money.  A lot of money.

Larry surely remembers a lot of details that I don’t, but I bet there are a couple of things in this post even he didn’t know.