Stan asked me to come to his office one day to help him make a big decision.

It was 1979. Marvel was still at 575 Madison Avenue. We comic book people were on the sixth floor. The non-comics magazine people, the bigshots (except for Stan) and business types were on the ninth.

Anybody remember the brilliant drawing Marie Severin did of those Mad Ave offices for F.O.O.M., I think? I wish I could find my copy. Wonderful. It showed, among other things, John Verpoorten casually backhanding a freelancer out the window while another freelancer (or messenger?), riddled with arrows presumably shot at him by the ambushers who had delayed him, was crawling in to deliver pages.

Anyway, Stan had the corner office on our floor. My Editor in Chief office was down the hall. It took up one corner of the “big” editorial room, into which my secretary and four editorial people were crammed.

Stan’s office was great. It had a view of Madison Avenue on one side and a view of 56th Street on the other. It was the only office at Marvel that had its own bathroom!

I knew I had made the cut as Editor in Chief when Stan told me that I could use his bathroom if necessary. I was the only one besides him allowed to use that bathroom. Talk about a perk!

In the bathroom, hung neatly behind the door, Stan kept an entire extra suit of clothes—pants, jacket, shirt, tie, the works—just in case he spilled something at lunch and had an interview or guests in the afternoon. And there was a full length mirror.

Along the Mad Ave wall was a long couch. In front of it was a large, sturdy, marble-topped coffee table, flanked by a couple of guest chairs. Along the hallway wall was another couch. A big TV and low bookcases were on the 56th Street side.

So I walked into Stan’s office and noticed that on one couch he had, propped up against the back cushions for easy viewing, seven presentation boards, each with a picture of one of the New X-Men. On the other couch, similarly displayed, there were pictures of the old X-Men.

Stan and our West Coast rep had wangled an opportunity to pitch an X-Men cartoon show to one of the networks. To Judy Price at CBS, I think.

The question was this: which X-Men team to pitch?

Stan had been out of touch with most of what had been going on in the comics for a long time, and he didn’t know much about the New X-Men. Sol Brodsky had brought him the presentation boards. They didn’t have names on them, but Sol had also equipped Stan with a list.

Stan looked at the images of the New X-Men, then at the list. Cyclops, he recognized, of course.

“This one,” he said, pointing at Storm, “must be Banshee.”

“Jim, don’t you know that banshees are female?”

“Yes, but, you should take that up with Roy. He created this guy a long time ago.”

“Roy?!” Stan had that look of horror and incredulity you get when you discover that the guy who’s been doing your taxes can’t add or subtract.

“I guess he thought it didn’t matter.”

Stan pointed at Wolverine. “This one, I guess, is Colossus.”

“No, this one is Colossus,” I said, pointing. In Stan’s defense, each character was on his or her own board, they were all the same size and Wolverine’s claws were not extended.

“But this guy looks like he’s made of metal.”

“Shouldn’t his name have something to do with metal?”

“A lot of things. He can climb walls like Spider-Man. He turns invisible in shadows. He’s strong and fast and agile. He has a prehensile tail…oh, and he can teleport short distances. With a puff of smoke that smells like sulfur. Bamf.”

“A ‘nightcrawler’ is a worm,” Stan grumbled.

With a sigh, and clinging to the fraying strands of patience, he directed my attention to the boards featuring the old X-Men.

“Pretend you don’t know who they are. Which one, do you suppose, is the Angel?”

“The guy with the wings?”

“Which one is the Beast?”

“The one whose knuckles are dragging?”

“The guy with the visor.”

Got it. The names ought to have something to do with the character’s powers and appearance. I knew that.

Stan chose to pitch the old X-Men rather than try to explain to Judy or whomever why the dark blue, monkey-demon guy who made stinky smells when he bamfed was named after a big, fat worm.

I’m not suggesting that there was/is anything wrong with the old X-Men. But I have to wonder if things might have gone differently if the New X-Men had been pitched.

The world, after all, had reached a stage at which people, including kids, were willing to study complex instructions and a rule book thicker than the Manhattan directory to play that new-fangled game, Dungeons & Dragons.

And we were on the cusp of an era in which action figure toys named Raphael, Michelangelo, Leonardo and Donatello succeeded beyond imagining. Almost any boys toy exec at the time would have scoffed. The prevailing wisdom was that kids couldn’t pronounce complicated names like those. They’d hate them.

But the world was changing.

Don’t worry, Stan caught up. He’s a super trend-spotter among many other things.

And, I am pleased to report, the New X-Men caught on a little. 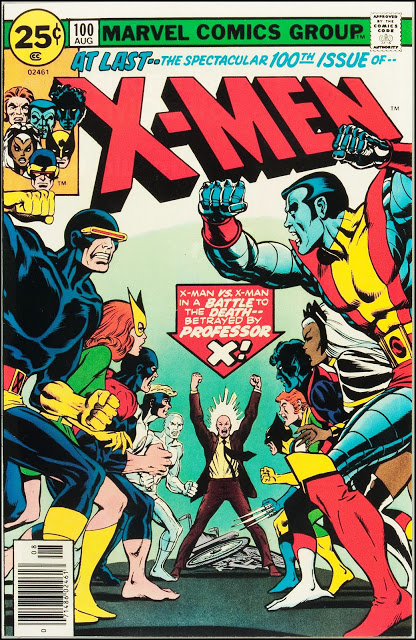 Note from JayJay: A link to Marie Severin’s drawing was found by Uncle Ernie: http://wednesdaysheroes.com/foom