Morality in ComicsIn 1980, or around then, at the San Diego Comic-Con there was a panel discussion on the program entitled “Morality in Comics.” I had no conflicting obligations so I went to see what that was all about.

Usually, when I went to panels, I found a seat in the back somewhere. The room was almost full when I got there, though, and it was a big room…! Who knew “morality” would be such a hot topic? I found a seat six or seven rows back from the front. Not ideal.

I’d learned that, being Editor in Chief of Marvel, if I attended a panel, often I was asked to participate, though usually I just wanted to listen. So I tried to be inconspicuous.

Yes, it is difficult to be inconspicuous when you’re six-foot-seven. Stop laughing.

On the panel were Marv Wolfman, Len Wein, Scott Shaw, a young woman writer whose name escapes me and maybe one more person. Can’t remember. There was also an empty chair on the stage. One panelist hadn’t yet arrived.

The moderator was Mark Evanier. He called the room to order and started introducing the panelists. About then, the missing panelist showed up. He was B. Kliban, who did cartoons for Playboy, among others. He was also well known for his book of cartoons featuring cats shockingly entitled Cat.

Evanier started by singling out and denouncing the works of Michael Fleisher, which he apparently found particularly immoral. Then he turned it over to the panelists.

Marv agreed that Fleischer’s stories were vile. Horror without the redeeming noble or positive qualities present in his Dracula stories.

Len talked about how super-hero comics should be upbeat and positive, with only happy violence. (NOTE: “Happy violence” is my term for what Len was talking about. I don’t remember his exact words.) He also spoke about the virtues of more cartoony comics and funny animals, which had largely gone out of vogue.

Scott Shaw condemned super-hero comics in general, with special emphasis on the violence. Then, he proceeded to ridicule a Stan Lee super hero story plot.

The young woman wasn’t familiar with Fleisher’s work, as I recall, but spoke about the obligation comics creators had to provide good moral content and positive values in their work.

Everyone agreed with those sentiments and echoed them. Everyone condemned Fleischer as the worst example of what not to do.

Except Kliban, who sat there silently.

The audience seemed to be buying this crap. Some listeners raised their hands and made supportive comments, or told anecdotes about the horribleness that came from immoral comics, or joined in condemning Fleisher.

“I think you’re all a bunch of Nazi book burners,” he said.

Well, that stirred things up.

The “book burners” tried to hold their ground. Kliban kept ripping them a new one.

The audience seemed to waver a little.

Finally, someone noticed me in the audience. Aha! Right around then, I was thought to be a champion of “morality in comics” because of the Dark Phoenix thing. Word on the street was that I wanted her killed on moral grounds, that because Phoenix had killed a starship full of Shi’ar and a planet full of broccoli people, my moral sensibilities compelled me to sentence her to death.

Baloney. Do I think of killing billions of sapient beings as immoral? Of course. But, hey, these are comics, and honestly, that’s nothing new. Galactus, anyone? My own creation, the Sun Eater? My objections to Chris Claremont’s original ending to the Dark Phoenix Saga had a lot more to do with the fact that it was a cop out. “Oh, she’s okay now. Let’s all go home to Long Island.” What a limp letdown.

There was a lot wrong with the original ending. Don’t get me started. But, I digress….

Someone called upon me to weigh in.

So, I started down the panel from left to right. I said, no I ranted words to the effect:

“Marv, do you mean to tell me that it’s more ‘moral’ for a character to suck the blood out of a victim’s neck than it is for Fleisher to have a heinous criminal turned into a board and sawed in half?”

“Scott, you can do what you did to Stan’s plot with anything by anybody. You can ridicule Shakespeare just as easily.”

“Evanier, why did you make this a personal attack on Fleischer?”

To the young woman I said, more or less, “Who gets to decide what constitutes good moral content and positive values?”

And, to Kliban, I said, and this is a real quote, “Mister Kliban, you I respect.”

And then it was on. Much honking and hooting ensued. Eventually, the time was up and the thing was over. No conclusions were drawn.

But Evanier and company had lost the acquiescence of the audience, big time. In my judgment, the book burners, how shall I say it? Went down in flames.

After the debacle, as I was leaving, Kliban sought me out and introduced himself. He liked to be called “Hap.” He said, “You’re the only other sane one here.”

I said, “I think we gave the crowd something to think about.”

These were done while Dave was on staff at Marvel for a short while, working mostly on covers.
Cover sketch based on an idea I suggested: 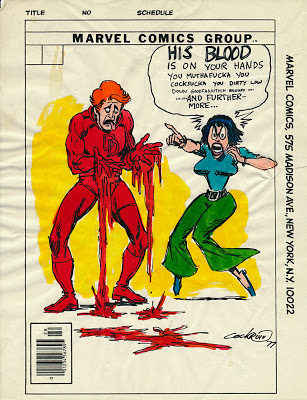 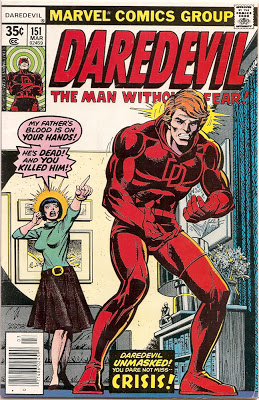 A Dave and Paty collaboration after I bought lunch for the whole crew (on me, by the way, not expense account, if you were wondering): 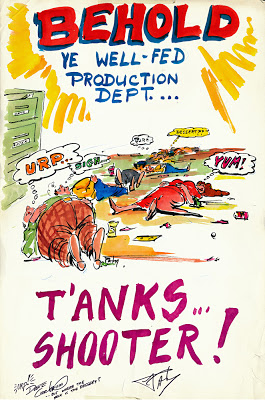 I don’t remember the genesis of the joke, but…it’s a charming birthday card: 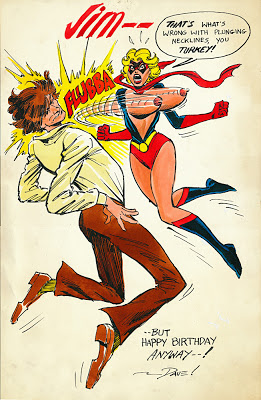 NEXT: Surreality Check and My Favorite Hap Kliban Story