My Favorite Hap Kliban StoryThe Hap Kliban story took place in San Diego, but the back story begins in Chicago. I believe this was in 1981. Could be wrong. Anyway, that year, the Chicago Con was the weekend before the San Diego Con. Because the trade show part of the San Diego Con started Wednesday (I think) it made sense to go directly from Chicago to San Diego, rather than return to New York in between.

The San Diego Con was new Marvel Publisher Mike Hobson’s first convention, I believe. He was going to join me and the Marvel con-tingent there.

Chicago was a terrific show that year. Among other things, I remember meeting this aspiring young artist, a kid named Mark Silvestri. I liked his stuff. Claremont heard about it and swooped down on him like a mutant hawk.

When at conventions I often took con people and creators, especially Marvel creators, to lunch or dinner on Marvel. It was a little thank you for all they did, for representing Marvel at the con, for general good will and PR. You know. So, one afternoon, I asked a couple of Marvel guys if they’d like to have dinner at Lowry’s. Lowry’s is a classy Chicago joint famous for its prime rib, in case you are a vegan and therefore unaware of notable carnivore hangouts.

Len Wein and Marv Wolfman overheard me and asked if they could come along. Well…both were DC guys at that point, but, why not? They’d done plenty of dinners’ worth of work for Marvel, and…why not?

Apparently word was spreading that Marvel was throwing a party at Lowry’s. Uh-oh.

That evening, 33 “guests” of mine showed up at Lowry’s. Lowry’s is not a cheap joint.

So, I had a choice: squelch the event. Just say it was a misunderstanding and walk out. Or insist that Marvel wasn’t paying for some of them and they were on their own…but how do you draw that line? “You and you are on the company, but you and you, no.” Or ask everybody to follow me down the street to some cheaper joint….

Or, I could roll with it. And possibly have to pay for part of it or all of it myself. I wasn’t sure how “dinner for 33” would play on the expense report, but….

I rolled with it. Everybody ate drank and was merry. Rick Obadiah of First Comics was among the guests. He sent a bottle of champagne to my table….

It came out to something over four thousand dollars. Thank God for the American Express Card. Don’t leave the Marvel booth without it.

Several days later, Mike Hobson arrived in San Diego. I was already there. We were staying at the same hotel.

Mike was the first approval on my expense reports. I explained to him what happened in Chicago and offered to split the bill with Marvel. He said no, it would be okay, but “…just don’t let it happen every week.”

Around six I met him in the lobby. We planned to go to dinner. He said, “Why don’t you invite a couple of our guys to come along?”

I saw Terry Austin, I think, in the lobby and someone else. They agreed to come. But the free-dinner vibes pervaded the area and soon several others came bopping over and asked to join us. Mike shot me a so-that’s-how-it-happens glance and said, sure, fine.

Then Hap Kliban saw the group gathering and came over. You guys going to dinner?

As our throng headed out the door, Larry Niven popped up. Hey, are you guys going to dinner?

I introduced them to Mike. I believe Mike was pleased and honored to have Hap, a world famous non-comic book cartoonist and Larry, a notable science fiction writer join us. He also wanted to get the hell going before anyone else, famous, notable or just hungry glommed on.

(ASIDE: I’d met both Hap Kliban and Larry Niven the year before at San Diego. I explained yesterday the circumstances of my encounter with Hap. Larry was at some function and we got talking about science and pseudoscience in comics. I said that some guys just didn’t have the real science background to do convincing stuff, but that I tried to encourage logic and consistency. Larry volunteered to help! He said that if ever we needed some coaching on science or reasonable pseudoscience, I should call him. Nice.

At some point Chris Claremont joined that conversation and Larry gave him hell about an X-Men story Chris written in which a space station falls to Earth. Chris had carefully calculated the acceleration of gravity and had come up with whatever fantastic speed this thing was moving when it struck—but, Larry pointed out, Chris had forgotten all about atmospheric resistance. Chris looked appalled with himself—but Larry, good guy that he is, offered the comfort that “There are some mistakes that only an intelligent man can make.”)

In five cabs, me, Mike and our thirteen guests drove to the Reuben E. Lee, a nice restaurant made to look like an old-fashioned, paddle-wheel river boat. The main reason we picked it was because it was big, and we figured we’d have a good chance of getting a table.

Because our party was so large, we had to wait in the bar for a while. They gave us a long table. The bar was a very spacious room and it was packed.

Hap and Larry were sitting next to each other, against the wall, facing into the room and I was across the table from them. Larry was explaining who he was and what he did.

Larry, in case you don’t know him, is justifiably proud of his work and his accomplishments. He’s pretty sure he’s…oh, come on, let me get away with this cliché in honor of Hap—the cat’s pajamas. Because he is.

And Larry was pretty full of himself that evening. I don’t know why. Maybe because he was trying a little to impress Hap, or because after another typical day of fan adulation he was feeling pretty good about himself. Whatever. He was bragging a little.

And Hap was egging him on. “Really, Larry? Tell me more!”

Hap was a very down to Earth guy. Very solid. Low key. For a humor cartoonist, he was pretty saturnine.

Hm. I had a feeling something was up.

Finally, our table was ready. We got up. Hap scooted out from behind the table and Larry right after him. But as soon as Larry was out from behind the table and standing, Hap clamped his arm around Larry’s shoulders, effectively holding him in place, facing the crowd. Hap said, as loudly as he could, “LARRY…I DON’T KNOW YOU WELL ENOUGH TO TELL YOU THIS, BUT YOUR FLY IS DOWN.”

All ten million people in the bar turned and stared.

Hap had Larry anchored so he couldn’t turn away. Larry didn’t know what to do. So he turned red.

The hissing sound you heard was a punctured ego balloon. I don’t know why, but I guess Hap just felt he had to do it. Or couldn’t let such a wonderful opportunity for his unusual brand of humor to go unskewered.

There was much laughter.

Hap turned Larry loose, the zipper got pulled up and we made our way to the dinner table.

Hap apologized sincerely and drew Larry a big, wonderful cat to make up for the embarrassment. Hap nearly almost had a sketch pad with him. After dinner and the ride back to the hotel, they parted laughing, as friends.

This is a letter sent by the lawyer for Conan Properties to Marvel President Jim Galton, who forwarded it Mike Hobson with a comment, who added a comment and forwarded it to me. I guess not everybody likes Barry Windsor-Smith’s work: 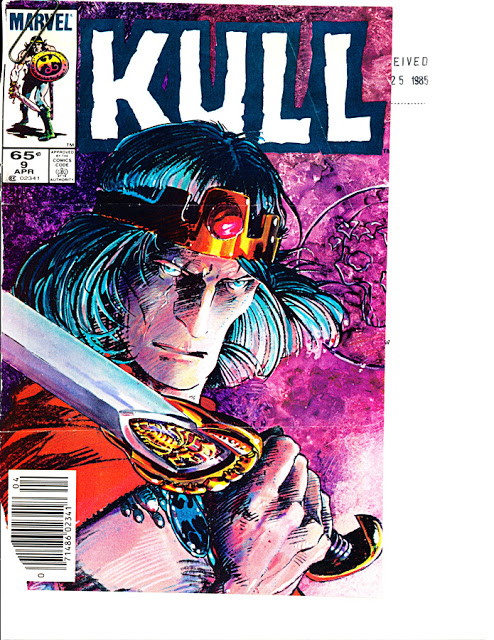 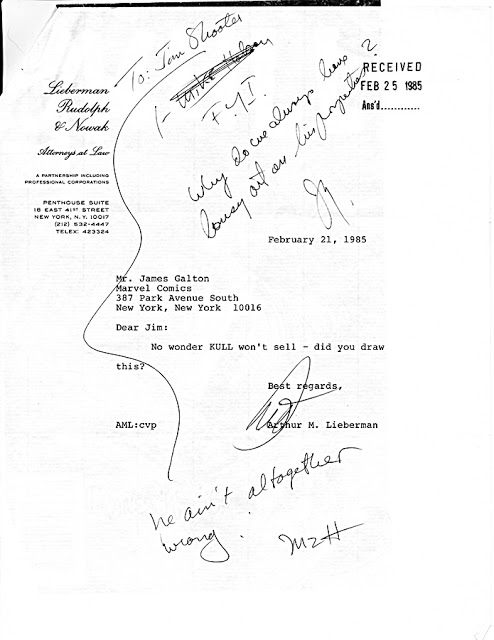 A fan letter from David Michelinie. Don’t remember for what: 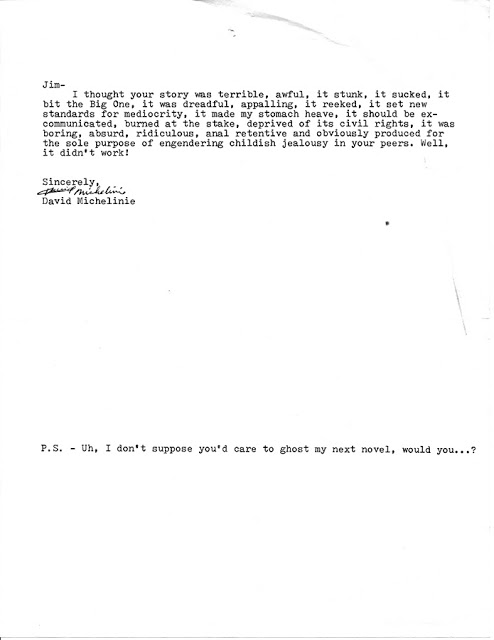 No idea. A doodle of Terry Austin’s I think: 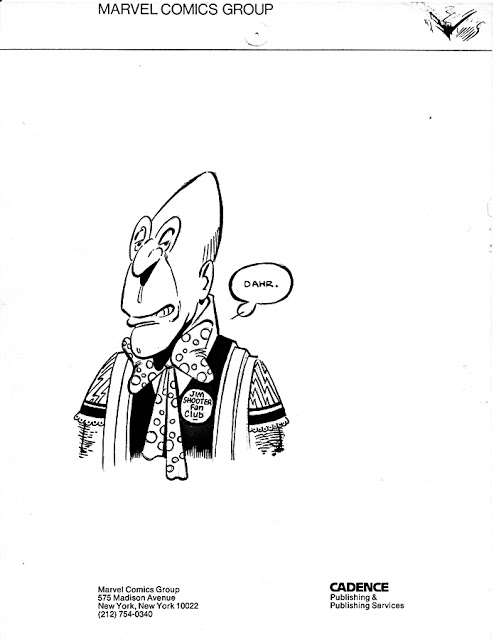