Sometime in February, 1984, my secretary (it was okay to say “secretary” in those days) the wonderful Lynn Cohen told me that Bill Sarnoff was on the phone. Not his secretary, Bill Sarnoff himself, holding for me.Great Scott!

Bill Sarnoff was the Big Cheese, I forget his exact title, of the publishing arm of Warner Communications. Among the operations under his purview was DC Comics.

Bill introduced himself, as if that was necessary. What he wanted to talk about was licensing the publishing rights for all DC characters to Marvel Comics.

Bill said, more or less, that Marvel seemed to be able to turn a substantial profit on publishing comics, as opposed to DC, which consistently lost money, a lot of money, and had for a long time. On the other hand, LCA (Licensing Corporation of America), Warner’s licensing arm did very well with the DC properties, while Marvel “didn’t seem to do much licensing.”

I guess the few million a year we made from licensing, mostly from Spider-Man, seemed paltry to him, what with the fortune that just their big four, Superman, Batman, Robin and Wonder Woman brought in.

I told him I thought Marvel would be very interested, and that I would discuss it with Marvel’s President, Jim Galton.

So, I did. I told Galton about my conversation with Sarnoff. Galton said he’d give Sarnoff a call.

The next day, I went upstairs, poked my head into Galton’s office and asked whether he’d called Sarnoff and, if so, how that went?

I was stunned. Why not?!

Galton said—and this is prima facie evidence of the fact that he missed Comic Books 101 in publishing school—since DC books weren’t selling, “those characters must not be any good.”

Trying not to sound too crazed, I explained that they were great characters and that the DC editorial people were, frankly, doing a pretty poor job with them. And that we could do better. A lot better.

I talked him into calling Sarnoff back and telling him we’d give it some thought.

I left his office with instructions to put together a business plan and present it to Joe Calamari, Executive V.P. of Business Affairs.

It took me about three days to put together a presentable plan.

The first part of the business plan was the publishing plan. I decided that we should launch with seven titles and build from there, if all went well. The titles were:

That was huge money for a comic book publisher in 1984.

That was with just the original seven titles—no expansion of the line—though if we were doing that well, obviously, we’d add titles. Slowly and carefully, if I had anything to say about it.

I anticipated adding one editor, two assistants and one production person to start.

I presented the plan to Joe Calamari, as ordered. Here’s my cover memo: 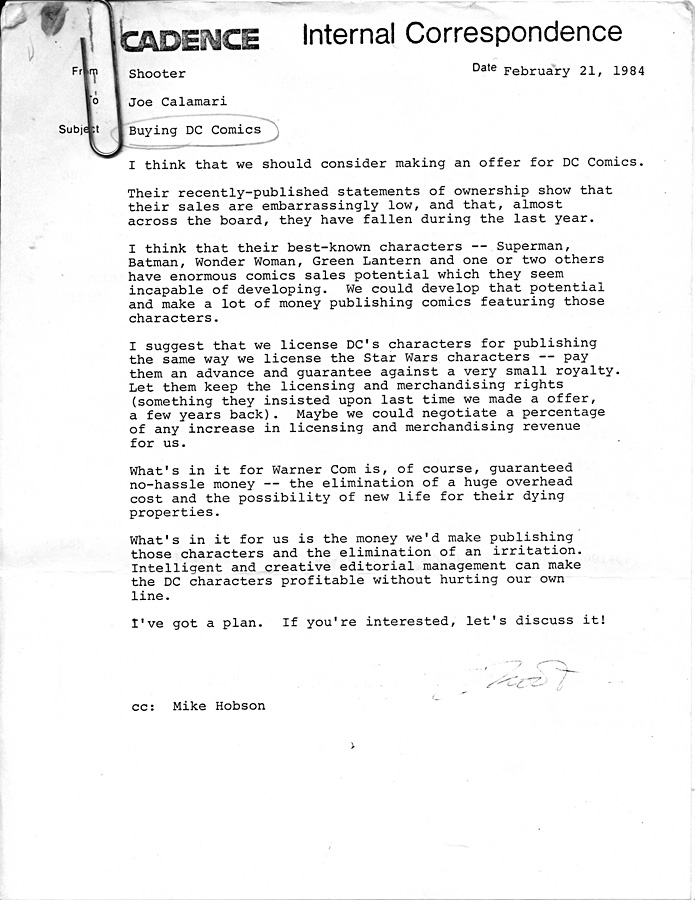 Galton was still skeptical. He thought my projections were crazy high. He sent the plan to the circulation department to review.

It wasn’t a sketch. It was a cover. Might even have been inked, I forget. I don’t have a copy of the thing, but I’ll bet Byrne still has the original. Somebody should ask him to display it on his site if he hasn’t already.

He had a story worked out, too, as I recall. He reallyreallyreally wanted to do Superman.

I think I remember Byrne telling me once that he had watched the first Superman movie over 1,100 times.

When the circulation department said they had completed their analysis of my plan, Galton called a meeting to discuss it. Besides Galton and me, Ed Shukin, V.P. of Circulation and Direct Sales Manager Carol Kalish were present. I don’t think Calamari was there. V.P. of Finance Barry Kaplan might have been.

Galton asked what Shukin’s take on my numbers was. Shukin said the numbers were “ridiculous.” Galton sort of smirked at me.

“We’ll do more than DOUBLE these numbers,” Shukin said.

Oh, my stars and garters!

And so, negotiations with Sarnoff began in earnest. I was a spectator at that point. The suits took over.

Very soon thereafter, First Comics launched a lawsuit against Marvel Comics and others, alleging anti-trust violations, among other things.

One test of anti-competitive market dominance is market share of 70% or more. At that time Marvel held a nearly 70% share, 69-point-something. DC was around 18%.

I think it’s safe to say that when you’re being sued under anti-trust laws, it’s a bad time to devour your largest competitor.

On the other hand, there is the “we-have-a-clue-and-they-don’t” or “superior acumen” defense. We considered arguing that defense and pressing on with the deal.

But, no. Ultimately, the suits and lawyers decided to play it safe and backed away from the DC deal.

P.S. First’s suit was nonsense. They alleged that we had flooded the market. Our actual increase in releases published during the “flood” year from the year before? Six. Six issues, not series. They alleged that we had used our dominance to fix prices with World Color Press to inflate their costs. In discovery, it came out that we were paying more than they were! (And that news made Galton and the print production people very peeved!) Etc.

I’ll write more about the First suit someday. Enough about that for now.

Net result, no SUPERMAN –First Marvel Issue! Too bad. It would have been fun.

MONDAY: The Famous ROM #1 Cover That Wasn’t, Jim Owsley’s Alleged Humor and the Devil’s Due

A Recent Question and an Answer