This is very frustrating. During the last week or two, I have held in my hands several items that now I cannot find. One was my copy of Heroes for Hope. The others were a press release and a PR photo regarding same. Now that I need them, where are they?

As I sort through boxes brought from my storage space, things get shuffled around, stacked here and there. Those things are neither here nor there. I must have put them aside very carefully someplace safe from the cats and apparently safe from me as well. Sigh.

They’ll turn up. Then I’ll show them to you. 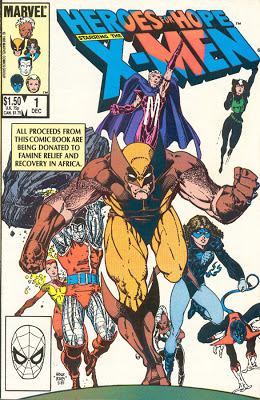 I suspect most people are familiar with the fact that in 1985 Marvel Comics published a comic book, Heroes for Hope, to raise money for East African famine relief. The idea came from Jim Starlin and Berni (now spelled Bernie) Wrightson. I think it was whatshisname Wrightson’s suggestion, made to Starlin. Starlin is the one who brought it to me. He and Wrightson proposed that Marvel publish a special book the proceeds of which would be donated to a suitable charitable organization. They envisioned a “jam” book created by the biggest names and best creators we could find, each donating a page or two’s work.

Starlin is very persuasive. He didn’t have to be. I thought the idea was wonderful. I think I was the one who suggested that we star the X-Men in the book, to maximize sales. I could be wrong. If Starlin says that was his idea, believe him.

I walked the new project proposal through the vetting process. I am very persuasive. I didn’t have to be. Everyone thought the idea was wonderful. I met no resistance.

I told X-Men editor Ann Nocenti and Chris Claremont about it. They thought the idea was wonderful.  Chris really got behind it. He sort of took over and became team captain. Chris recruited big name writers, Starlin and Wrightson went after big name artists, and all three did brilliantly, wonderfully well.  Ann was central fire control, governing and coordinating the whole project, aiding and abetting the recruiting process.

Starlin, Wrightson, Nocenti and Claremont did everything. I had the good sense to stay the hell out of their way.

They got people to contribute who probably wouldn’t even have taken my call.My input was fairly minor. I worked with Chris and Ann on the plot a little. Mostly I was the Structure Enforcer. I made sure the story worked and that it could be parceled into one, two and three page sections to make life easier on the jammers. We gave Stan the first pages to write and Archie Goodwin the last ones, so the team would have heavy-hitter, comics-experienced people anchoring the effort on either end. I wrote two pages in the middle somewhere, drawn by Alan Weiss, inked by Joe Rubinstein, lettered by John (Jack) Morelli and colored by Christie Scheele. They looked great. 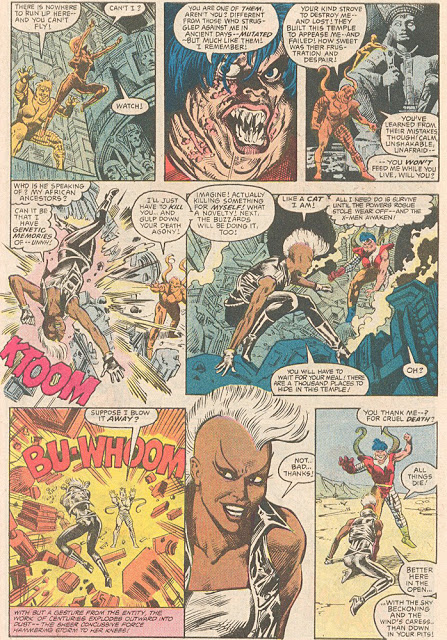 We had no shortage of volunteers. Everyone wanted to participate. I hated the fact that so many were willing and so few spots were available. I think Chris and Ann did a pretty good job of mixing Marvel writers, experienced comics pros, with stars from other fields.

The non-comics writers who participated needed some help in most cases, which Ann and Chris provided. The biggest challenge was Stephen King’s contribution. I may be exaggerating here, but not by much—he gave us something like 5,000 words for three pages. Almost overnight, by the way.  Chris, Ann and I somehow cut that down to what would fit on three comics pages. 500 words? I forget.  Has anyone else ever had to cut out 90% of Stephen King’s brilliant words?

Pam Rutt, Marvel’s PR director, really got behind this project. That was refreshing. I loved Pam, but sometimes it was hard to get her to grok the significance of what, to us comics people were clearly big events. Spider-Man’s black costume for instance. I pitched that to her as a PR op. Nah, she said, no one will care.

Imagine her surprise the day the first Spider-Man black costume issue came out when we were swamped with calls from major newspapers, the wire services and news media outlets across the country. Never saw a PR department scramble so fast….

Pam wasn’t a comics person.  Almost no one at Marvel outside my department and some of the sales department was. Most Marvel execs would proudly tell you that they had never even opened a comic book (thereby preserving their “adult” image).

Once the V.P. of licensing told me excitedly that she’d just made a great deal for Wonder Woman. I pointed out to her that Wonder Woman didn’t belong to us. She was nonplussed. I told her to call the woman at LCA who handled the DC characters—I can’t call her name to mind at the moment—and pretend that she had just warmed the potential client up for her.

Once our V.P. of Promotions, who mostly spent her time arranging for Marvel’s costumed actors to appear at events like the White House Easter Egg Roll or ribbon cuttings at malls called me to ask how many stories were in each issue. You get the drift.

Pam got behind what you’d expect a civilian to get behind—the anti-child abuse comic we did with the National Committee for the Prevention of Child Abuse, the launch of Marvel’s children’s book line, etc.  Heroes for Hope was right in her wheelhouse. When she embraced a PR op, she did a great job. She was/is brilliant, if not comics literate.

Pam had arranged for Oxfam America to receive our donation. Their reaction to our offer, at first, was what one might expect from people who had never seen a comic book up close: “Comic book? There’s nothing funny about famine!” Sigh.

For some reason Pam was determined that we should donate the money to them, though, and we convinced them that comics weren’t always comic. They still demanded to review the finished book before they would commit to accept our donation.

When the book was ready to go to press, we sent a mock-up to Oxfam America to review.

Their response was that they wanted nothing to do with it. Flat rejection.

Furthermore, they said that the book was unbelievably offensive and that we, the people of Marvel Comics, were racist, sexist and reprehensible.

When this was told to me by Pam and Marvel President Jim Galton I felt as if I were being called on the carpet. I was flabbergasted. I showed them the mock-up.

They didn’t see anything wrong with it.

Galton called the exec at Oxfam America we’d been dealing with to ask what their specific objections were.

Their response was that, while under no circumstances would they have anything to do with our project or with us, they would send an executive to meet with us and explain the many horrific, repugnant, disgusting elements that made our “comic book” anathema.

So they did. Oxfam America’s representative came to meet with Galton and me. The meeting took place in Galton’s office.

I do not remember the man’s name.

He was a nice-looking, thirty-something man. He had on a suit that probably cost more than my entire wardrobe. Designer shoes. He had on more gold and diamond jewelry than I’d ever seen on a human being. Jeweled watch. Cufflinks. Stickpin. Bracelets. A neck chain that would make a rapper blush.  Doubt me, go ahead. Discount by two-thirds what I’m telling you and you should still have an image of a guy wearing clothes and jewelry that at market price would feed a thousand starving people for a month.

After the greetings and handshaking, Galton, making conversation, said that he imagined that Oxfam America and other charitable organizations had, at least, gotten a lot of people to focus on the ongoing tragedy in Africa, and had inspired many efforts such as ours from musicians and performers and artists.

This Oxfam America fellow, let’s call him Midas, just plain gushed about how good for business the East African famine was, how donations were rolling in at record levels. He talked about the millions dying as if it were a great marketing opportunity.

Galton and I were stupefied. We couldn’t believe how thrilled Midas was that his business was booming.

Midas explained that the purpose of his visit wasn’t here to request changes or negotiate. He had come to save us from our own folly. He made it clear that Oxfam America had nothing but contempt for us and our work. He came as a favor, to urge us not to publish the abomination that we had created. He assured us that it would destroy Marvel Comics.

Right. Well, naturally, I wondered why.

Midas flipped through the mock-up. Again and again he pointed out black characters that he said “looked like Michael Jackson.” We were obviously trying to capitalize on Michael Jackson’s image and fame.

Michael Jackson in particular and the Jackson family in general were huge supporters of Oxfam America, by the way.
Every drawing of a woman, he said, was sexist and exploitative. He was particularly offended by depictions of Storm, which he thought were more than sexist, a denigration of women of color.

I mentioned that the men were heroic and glamorous, too. Just like in the movies, stars tend to be good looking.

He pointed out a panel in which Chris had a carnival barker saying: “Yowza….” That, he said, was racist in the extreme. I don’t have the book handy, as explained above, but wasn’t that character Caucasian?

I cannot begin to tell you all the racism, sexism and hate that he (and Oxfam America) read into the words and pictures.

The punch line is this: Midas accused Marvel of “stealing Janet Jackson’s logo.” He believed that the Heroes for Hope logo, credited to Janet Jackson, was ripped off.

I offered to introduce him to the designer on our staff who had created the logo, one Miss Janet Claire Jackson. He dismissed my obvious attempt at a cover-up. 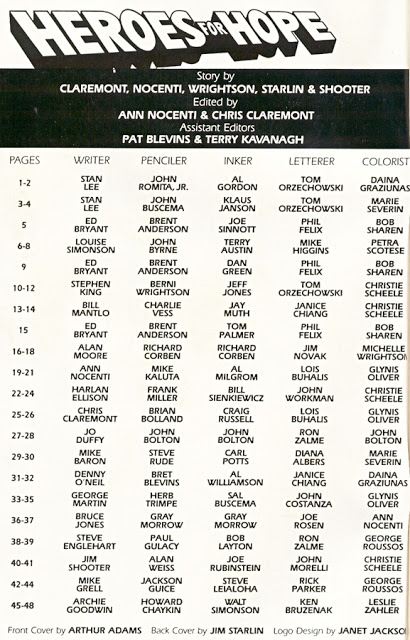 No, really, we have a designer named…. Oh, never mind.

Finally, the lunatic left. Galton and I shared a moment of “what a jerk.”

Pam was instructed to find some other organization to which to donate the money. She came up with the American Friends Service Committee. 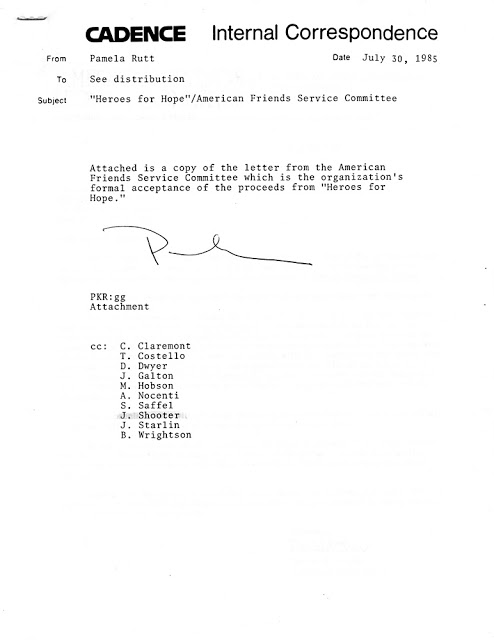 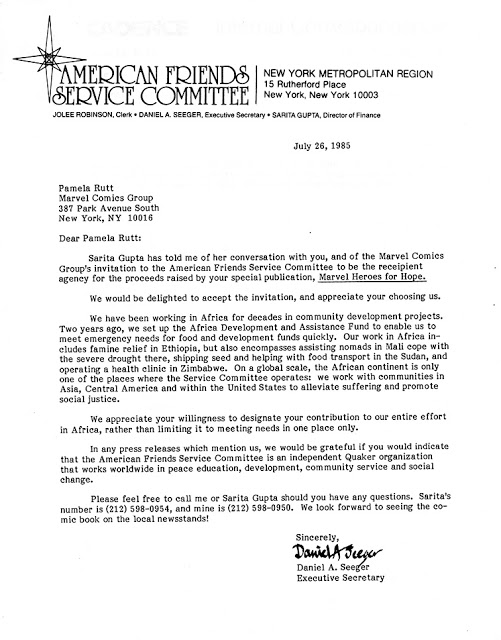 Heroes for Hope was a huge success. Thanks to our sales department, we got donations from downstream—distributors, retailers, even fans.

Can’t find the press release and the picture of me and Galton giving the AFSC honchos the PR “Big Check” created by our production department to symbolize the real check. I think the initial donation was $500,000. Much more came later.

It was a great thing. Jim Starlin, Bernie Wrightson, Ann Nocenti and Chris Claremont are great heroes in my book. Heroes for hope. There are people alive today who wouldn’t be without their efforts.

Thanks to everyone who helped, and everyone who wanted to but couldn’t because there wasn’t room. It was one of our finest hours.

NEXT, A DAY OFF.  THEN, I DON”T KNOW, BUT SOMETHING GROOVY