Back when I was a kid, in the letter columns of Adventure Comics featuring Superboy and the Legion of Super-Heroes there was a section entitled “Bits of Legionnaire Business.” Readers sent in ideas for new Legionnaires—names and short descriptions of their powers—and editor Mort Weisinger would publish the most interesting ones. A few times, Mort asked me to take an idea from “Bits…” and develop a character based on it. I remember that Shadow Lass was one such character. There might have been others. 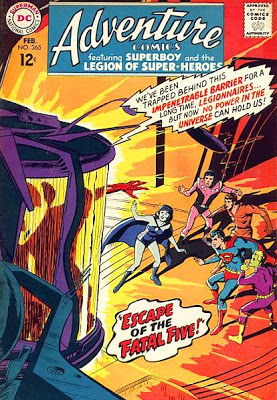 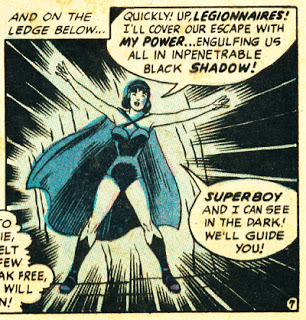 That was back in the 1960’s, of course. Readers were pleased and honored to see their suggestions make the “Bits…” section and apparently thrilled if their idea was developed into a continuing character. Seeing your name, your character’s name and five-word description in print was great, and seeing your character developed and appearing on panel, well…that was awesome. Reward enough for your efforts.

Well, the suggestions for new Legionnaires continue to pour in from you fans. So here we are, back with a new batch of these “Bits of Legionnaire Business.” This page represents only a fraction of the thousands of ideas that have deluged us. Of these, we’ve selected the ones we liked best – some intriguing “straight” heroes, others wild and kookie. We’ll just pass along the top choices to our writers for possible use in future stories. One word of caution – try to get really original ideas. Many otherwise good heroes were rejected because they were similar to some we’d used before. Send your brainstorms to: BITS OF LEGIONNAIRE BUSINESS, National Periodical Publications, 575 Lexington Ave., New York, N.Y. 10022, preferably on a postal card. And now for this issue’s collection:

Robert L. Chambers, Caro, Mich. – “Monster Boy can assume any wierd form he chooses.” . . . David Low, Florissant, Mo. – “The Traveler has the power to transport himself and others anywhere he wills, including other time-eras and dimensions.” . . . Rudolph Valentino, Cedar Brook, N.J, – “Inertia Kid can increase the resistance that a body has to moving, and thus render it motionless.”. . . Kim Boyce, Chicago, Ill. – “Pajama Pat can put anyone to sleep for any length of time.”

Billy Brennan, Collingdale, Pa. – “Fingertip Fred can make his fingers as long as he wants. Also, they can drill through stone or metal.” . . . Mark DeWolfe, San Antonio, Tex. – “Cat Kid has the strength of a tiger, the courage of a lion, the speed of a cheetah, the ability to see in the dark – and when he falls, he always lands on his feet.” . . . Paul Miller, Oakdale, Conn. – “Dynamite Dan can make anything explode.” . . . Dan Solla, Freeport, Pa. – “Liquid Lad has the power to turn any solid, unliving thing into any form of liquid.”

Dear Editor:
Lately, much attention has been given to Jeff Greenberg for his creation of Color Kid, now a member of the Legion of Substitute Heroes. It is my sad duty to inform you that he did not create Color Kid. In issue No. 311, Leslie Leibow, of Fairlawn, N.J., sent in Color Kid as a Bit of Legionnaire Business. When will you give credit where credit is due?

(We already have, Liz – by crediting the first fan to send the idea in. Jeff’s Bit of Business appeared in No. 309. And speaking of Jeff, read the next letter. -Ed.)

Dear Editor:
Thank you! Thank you! I am so proud! You have made Color Kid one of your most vivid and exciting new characters. Even though he is only a Substitute Legionnaire, he was the hero of “The Forgotten Legion” (which was one of your best stories in months). And why am I so proud? Because he’s my character – I created him in your Bits of Legionnaire Business column. Well, I’ve made my contribution!

(You sure have, Jeff! We fell your boy adds a great deal of color to the Substitute Legion – so there’s no telling when he’ll pop up next. -Ed.)

No, this isn’t a nostalgic yearning for the good old days. I wondered about the propriety of that practice even then. These days, I wonder about news and weather shows on TV that invite people to send in pictures or video. Let’s see, I send you spectacular video that fills air time for you and my reward is seeing my effort on TV, helping you amuse your audience and make your money…. Hmm.

As far as I know, we never used anything without compensation from the submissions and samples we reviewed by the literal ton at Marvel back while I was there, 1976-87. There were some cases in which we saw something, liked it and bought it. The Black Spider-Man costume comes to mind. The correspondent sent in a sample plot in which Spider-Man is given a new, black costume by Reed Richards that has high-tech features. I called the guy up. His plot wasn’t up to professional standards, but I offered to pay him for it anyway, to “buy the idea.” He was very happy with that.

I had no thought about where or when I might want to put Spider-Man in a black costume. I put a note in my drawer. A long time later, maybe a year, I needed an event for Secret Wars and remembered the black costume idea. I figured it was going to be a throwaway bit, something we’d use once.

Developed first by me, then by David Michelinie and editor Jim Owsley (now Christopher Priest), the costume became a character and went on to great things, even being featured in a movie. Though the only thing he contributed to the black Spider-Man costume were, essentially, the two words “black costume,” I think Marvel owes the guy who strung those words together more money.

In another case, woman sent in a plot for a graphic novel. I liked the ideas. She wasn’t ready for prime time, though, but with a great deal of help from the editor and brilliant artist Berni (now “Bernie”—geez, can’t anybody just pick a name and stick with it?) Wrightson, her story saw print and did well. I wonder whatever happened to her. It seemed to me she had great potential.

Once, at VALIANT, an artist named—I’m pretty sure I have this right—Dennis Woodyard showed me samples. I was looking at the drawing more than the content. We couldn’t offer him a gig at that point.

A year or so later, JayJay and I cooked up a new character, Gilad Anni-padda and decided to title the series he would appear in Eternal Warrior. The title was my idea, I believe. Right, JayJay?

When the first ads came out, who should turn up at the office again but Dennis Woodyard. Turned out the art samples he’d shown me featured a character of his own creation, Eternal Warrior.

I had blanked on that entirely. I was unaware that I had used the same name.  The characters were completely different by the way.

So, we worked something out. Since our book was already in production and his wasn’t, he graciously changed his character’s name and allowed us to continue with Eternal Warrior in return for some compensation, including free advertising for projects of his. At that point, we were just starting to take off and we still didn’t have much money.

So, I understand why, these days, creators fear losing control of their creations and companies fear legal exposure to the point that they don’t want to see any submissions or samples for fear of an Eternal Warrior situation or worse.

That said, it seems to me sometimes that everyone these days has become a little too paranoid, a little too precious about any little snippet of an idea they might have.

Here’s the nostalgic yearning for the good old days part….

It seems to me that not so long ago, creative people had more of a sense of community. We were very free with thoughts and suggestions, or even pitching in on a creative barn-raising.

Len Wein needed a science fiction-y adversary for an issue of Thor Walt Simonson was drawing. Among those of us drained, desiccated husks hanging around the office late after hours listening to Len and Walt plot the issue was Roger Stern. Rog said, “How about 10,000 chrome armadillos?” Everybody laughed, Walt made a note and the rest is comics history, however improbable.

Another time, I needed a name for an Avengers villain who had control over gravity. “Graviton” said Len, hardly looking up from whatever goofing off he was doing. Len is good with names.

Nobody thought anything of such things.

The success of the first release of the Try-Out Book inspired us to do a second release. We promoted it using “The Great Try-Out Contest.” The idea was that we would sell some books and find great new talent among the winners and best entries.

I’d say it worked. Several of the winners went on to do a lot of work in comics.  Here’s the list again: 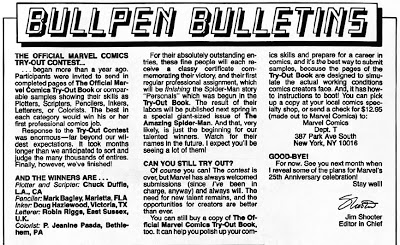 Mark Bagley, in particular, went on to become a notable artist. I don’t think the winning writer, Chuck Duffie, ever did any other work in comics. 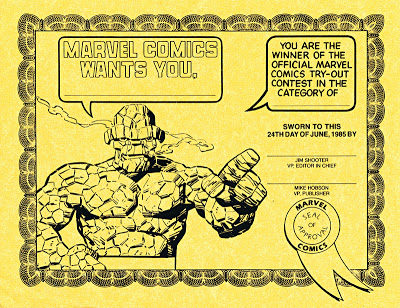 Winners were also promised that they would complete the unfinished story presented in the Try-Out Book, “Personals,” which would be published as a Spider-Man special issue.

I don’t think we ever accomplished the latter. I don’t remember a specific reason why. But, trying to organize a particular group of people to create a comic book falls north of cat-herding on the degree of difficulty scale sometimes. Also, I believe that would have been in 1986, toward the end of my tenure as Editor in Chief, during a time when I was busy battling the greed-monsters of Cadence Management, Inc. who were trying to sell us comics people down the river. My attention was largely diverted.

Years later, in 1994, I believe, I went with my girlfriend to a fancy restaurant in Manhattan called the Ocean Club. We were ushered to the best table in the house (?!) and served complimentary beverages (?!). Then the Maitre d’ or manager—I forget, but, whatever, he was the boss—came over and introduced himself. He was Chuck Duffie, the Try-Out Contest’s winning writer, doing pretty well, it seemed, albeit not in comics.

MONDAY:  Heroes for Hope and Why I Don’t Like Oxfam America