First This:Sorry I’ve been late so often of late. Anyone who has multiple deadline clocks ticking knows that when something unexpected comes up, the other things all start bumping up against each other. Then my best-laid schemes gang aft agley.

Yesterday, I had to take an unexpected trip to Binghamton, New York and back. After seven white-knuckle hours behind the wheel through a blinding, interminable downpour, I wasn’t at my energy-level best, and I had to put out the hottest deadline fires first.

P.S., the Susquehanna River overflowed its banks and Binghamton is largely inaccessible today. Got in and out just in time.

Back in the saddle again….

The technical illustrations in the Try-Out Book were done by Janet Jackson, an illustrator who showed me samples of tech-illos at a convention in Houston. It was her first work for Marvel Comics. I suggested many times that she might consider changing her name, for obvious reasons, to Sheena Easton or Celine Dion or something. She eventually began using the relatively pedestrian, unimaginative nom de guerre “JayJay.” Yes, our JayJay, the Blog Elf herself.

The Startling Conclusion of the Submission Saga
It was my policy to review submissions, and because I got away with it, that is, no one managed to thwart me, it was Marvel’s policy.Oh, some tried, from time to time. Every once in a while the house counsel or one of our outside, hired-gun intellectual property lawyers would raise the scary specter of legal exposure, meaning what if somebody sues us claiming something we’re doing was lifted from their submission?

I looked into it. I’m not a lawyer, but I’m fairly good at reading. A little research told me that our “exposure” was minimal. From what I could ascertain, Marvel didn’t really run much risk reviewing submissions sent in by people freely and of their own will. Especially those involving our own characters, as nearly all did.

My arguments were sufficiently persuasive that I managed to beat back the interference from legal types every time. And, I believe, my policy endured after I was gone.

Maybe I should have been a lawyer.

Times have changed. In recent years, the pendulum has swung more to the side of people who make claims that commercially successful properties were based upon, inspired by or outright ripped off from their submissions or suggestions. The courts have looked with increasing favor upon such claims and there is ample precedent to embolden claimants. Especially in the big-money media, like movies and music.

Not long ago, virtually every single movie made precipitated a gaggle of lawsuits, mostly by people with flimsy claims hoping that the studios would pay them some small amount—say $100,000—to go away, rather than defend themselves in court, which could cost more. The costs were getting out of hand. So, the studios have become increasingly risk-averse, and these days, studios are loathe to finance films that do not have a clean chain of title for the intellectual property involved.

Printed comics aren’t big-money, but movies based on comics are, so Marvel, DC, Dark Horse and others have become increasingly unwilling to so much as look at any samples or submissions. The fear of compromising the chain of title for anything is that great.

(ASIDE: In 1995, I think, I was asked to testify by Columbia Pictures in Federal Court. Someone was suing them over the Karate Kid movies, claiming that the idea was his, that, in fact, the story was based on his own experiences and that he created the name.

You’ll notice if you look closely, that at the end of each KK movie there is a TM and Copyright notice identifying “Karate Kid” as the property of DC Comics, used by Columbia under license.

The Plaintiff asserted that he had created the name “Karate Kid” in 1968. I testified that I had created it, work-for-hire, for DC Comics in 1965, and brought a copy of the first issue of Adventure Comics in which Karate Kid had appeared, published in 1966, which was entered into evidence.

The judge told the jury to ignore my testimony as “hearsay.” He said that for all he knew, I could have printed up that comic book in my basement the night before. I argued that the Statement of Ownership, which, coincidentally appeared in that issue, a Federal document (back then) was proof of authenticity—and that half a million copies had been sold, which with pass-along readership and subsequent appearances meant, undeniably, that the criteria for national exposure had been met. DC’s lawyers submitted case law demonstrating that printed magazines (the Judge didn’t consider a comic book a “magazine”) were acceptable as evidence.

Columbia prevailed. Their lawyers told me I was the best witness they’d ever had since Clint Eastwood.

They gave me this tee-shirt as a thank-you. 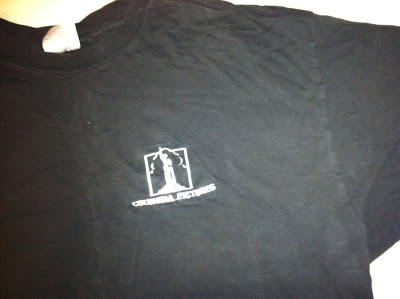 Oh, and a dinner. At which they made a pitch to represent DEFIANT.)
Meanwhile, back at Marvel….
As explained yesterday, we had huge numbers of submissions pouring in.  Interestingly, the Try-Out Book actually cut down the flow a little.  Or, I guess, more accurately, I should say it slowed the rate of growth of the flow of submissions. I received this comment yesterday:

Jerry Bonner said… I suggested this story about the Try-Out book. Great to read it, Jim, and thanks for posting it!

I was only 12 or 13 when it came out and used my hard earned paper-route money to buy it. It really was awesome! I tried my hand at each section, although I never sent them in…because I fully realized I was only a kid and not ready for prime time….

Thanks, Jerry.
You see what I mean about the TOB discouraging submissions. Creating samples under “combat conditions” gave would-be submitters a much better idea of just how difficult the work that goes into a comic book is. Some judged themselves not ready and didn’t send in their work.
Michael Fleisher once said about creating comics, words to the effect: “More work and skill and thought go into the least of our efforts than most people can imagine.” He had a point. Some things that look like they might be easy turn out to be very difficult when you do them for real.
Once in a while, the submissions would pile up and I would commandeer all the assistant editors for a day to get us from Overwhelmed back to Whelmed.  Here’s a memo from my secretary regarding such a day, with my note scrawled on the bottom… 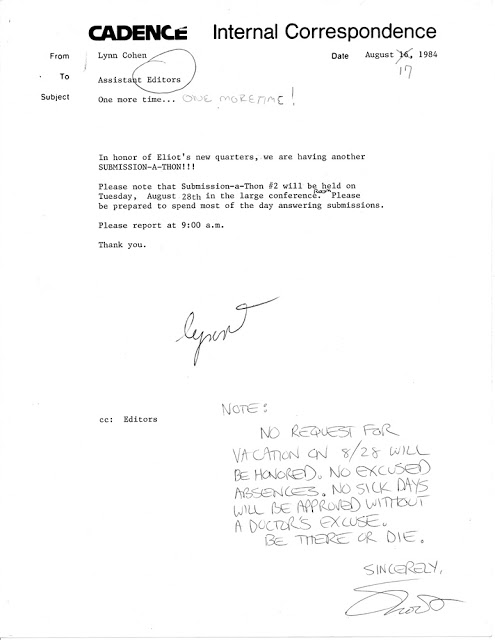 At this particular Submission-a-thon, I made sure an editor was present in the room throughout the day to make rulings on the judgment calls. They took turns. Even I took a turn.
The story you are about to read is true. The names have been changed to protect the incompetent.
On my shift, I heard two of the assistants, Dumb and Dumber, talking about a penciling submission, debating its merits or lack of same, saying things like it’s a little cartoony, it’s not “there” but pretty good, etc. I went over to take a look.
“These are Michael Golden pages,” I said. “His package must have gotten into the subs pile by mistake. Give them to Larry Hama.”
At least they knew the pages weren’t form letter level.
NEXT:  No, Really, This Time for Sure, the Startling Conclusion of the Submissions Saga
MONDAY:  Heroes for Hope and Why I Don’t Like Oxfam America