The intro goes on:

“The entire line of comic books is being renumbered, with new, innovative storylines featuring our most iconic characters helmed by some of the most creative minds in the industry.

“Not only will this initiative be compelling for existing readers, it will give new readers a precise entry point into our universe.”

You can nitpick the imprecise copywriting. All readers exist, characters being “helmed” conjures an image of King Arthur’s troops…. But, who cares?

By “existing readers” I guess they’re referring to everyone who reads comic books now, not just the current crop of DC readers. Us. People to who at least understand what they mean by “renumbered” and some of whom care that there will be #1’s on the covers.

By “new readers,” I suppose, they mean people who have long wanted to read DC comic books but were waiting for a precise entry point to happen along. Plus people who previously had no desire to read comic books, whose interest has been stirred by the substantial PR effort behind the “initiative.”

Because new readers have been given a “precise entry point” I assume the doors are slammed shut and locked once the #2’s come out.

EVERY ISSUE SHOULD BE AN ENTRY POINT!

All right, I’m old. According to the tag line JayJay appended to my name at the top of this page, I’m a “Large mammal.” I suppose then, I must be a woolly mammoth or a megatherium or something. I learned my trade when comic book publishing was a still a mass market business.

But, let me take them at their word. They want to get all of us and at least some of them, the new readers interested and onboard…

…with this offering, for one:

Red Hood and the Outlaws #1 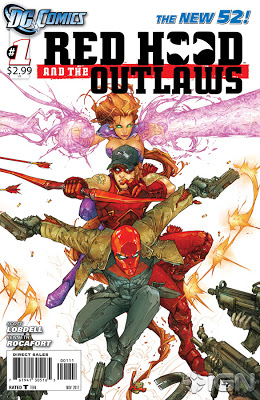 As one of us, I suppose I should know who the three characters are. I don’t. Good. Makes it easier to shift my mind into New Reader mode.

It’s amazingly well drawn. I think anyone would take the image to be a symbolic shot rather than an actual scene from the story—a generic action pin-up. But good. 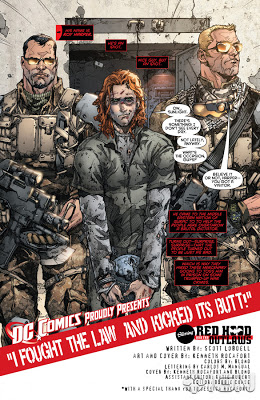 Again, it’s beautifully drawn. There are captions that give me a clue about what the situation is. The copy in the captions is conversational and expresses opinions, so I assume someone is narrating. Whoever it is, the prisoner must be the one he or she is referring to, one Roy Harper. Okay so far. 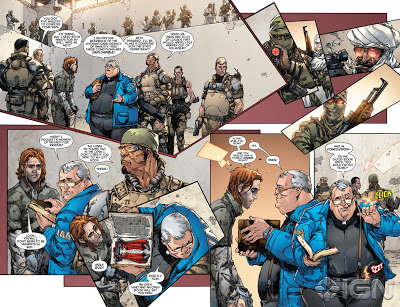 First, a strangely shaped panel for no apparent reason. But, what’s going on is clear enough, even to New Reader me. Except that I paused at Roy Harper’s line, “I’d shake, but I need both hands for my ball.” What?  Oh…I see.

I look back at page one, and yes, his “ball,” as in ball and chain, is shown close enough to establish it, but it’s colored so much like what’s around it that I missed it. Maybe that’s just me. That’s what New Readers always think the first few times they miss something or fail to understand something, by the way. “It’s me. I’m just not used to reading things like this.”

Hmm. More oddly-shaped, crooked panels showing people with guns. Middle Easterners. Aha! The “locals” mentioned, and seen on the walls in the background of the first panel. I wonder for a moment if there’s some significance to the way these little images are strewn around, shrug, and go looking for the next words to read…

…and arrive at a tangle of art. An odd-shaped panel with another one lying on top of it. Why do they cover part of the panel I’m supposed to be looking at with another panel? If there’s an inset on a map, it’s placed out in the middle of the Pacific Ocean where it doesn’t cover anything, not even Easter Island. Oh, well.

The sudden shift to an overhead angle in the overlaid panel doesn’t throw me because it’s so well and clearly drawn. Roy Harper’s head poking out into the underlying panel strikes me as strange, though. It just looks weird. Panel borders are routinely violated. They mean nothing. The mysterious quadrangles floating around between panels and into the next one puzzle me.

“Pastor Beerback” pokes out of the last panel and overlaps himself in the previous one. The little sliver of a highlight doesn’t help much. It only cost me a tenth of a second to sort the images out, but still….  Is this desirable for some reason I don’t understand?

Jim the comic book veteran talking for a moment: It wasn’t until the third time I read this that I realized Pastor Beerback was tugging on his suspender making something go “CLICK” and “TZZT.” 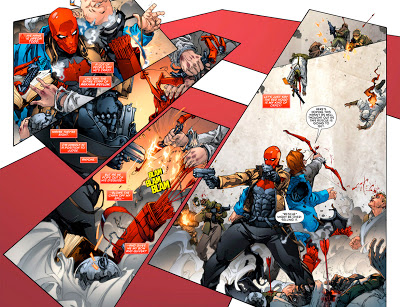 The first panel’s image is not only not clear-at-a-glance, but after staring at it for a few seconds I still don’t understand it. I read the copy, hoping for a clue. More red captions. The first one says, “His name is Jason Todd.” Okay, I’ll guess that’s the guy with the red head. Press on.

In the second panel it looks like a hand is drawing a gun. Is it one of the “locals?” One of the mercenaries? They’re the only ones I’ve seen with guns. I guess that the other hands seen are Roy Harper’s, unfolding his folded-up bow. Where did those arrows come from? No clues in the captions.

Third panel…wait, the captions are now Roy Harper’s narration! What?!

At least the captions tell me what’s happening in the picture. I doubt that I would have figured it out, or, at this point, have bothered trying.

Panel four, slowly the little light bulb comes on. The drawing is confusing, but after staring at it for a while, I realize that the bits of Pastor Beerback visible are the remains of a disguise. I also make the leap that the guy with the red head is “Red Hood.” Jason Todd? Even New Reader/civilians understand, I think, that comic book costumed characters usually have regular names besides their nom d’guerre. Superman is also Clark Kent.

So, now, both armed—I figured out that it was the red head guy drawing the gun before—they kill lots of enemies.

This spread is where they lose me for good. I have to struggle too much to grasp what’s going on. I don’t have to work at it to understand most novels, most TV shows or most movies, but this takes some effort. New Reader me throws the book in the trash and doesn’t bother with comic books again.

But I shall persist for the Hell of it.

It doesn’t get better. Page six, why is the guard posted outside the gate so calm if there’s a major firefight going on inside? What blows out the gate? A reference is made to Batman…okay, even I, New Reader, know who Batman is. Or used to be.

Page seven, more strange-shaped, weirdly angled panels for no apparent reason. They’re wasting an awful lot of space. Look at all that unused space! Why?

Ahh! At last, I see. Some red captions are Red Hood narrating and some are Roy Harper narrating. 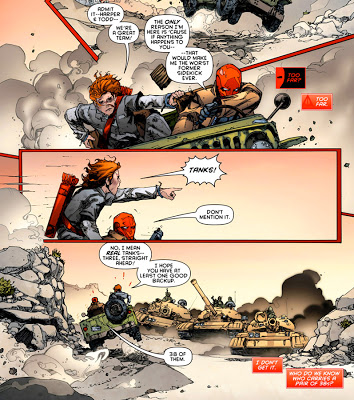 “I hope you have at least one good backup.”

Starfire is wearing not much. There are effects around her hands indicating…something.

Page nine comes and I’m still not sure what happened to the tanks. Red Hood calls Starfire “Kori.” I guess that’s her real name. He asks her, “…could you fly ahead and take out any bad guys or tanks or anything?”

Now, let me get this straight, Red Hood. You have at your service someone who can destroy tanks and you decide it’s a good idea to enter the prison in disguise, smuggle your friend his bow and arrows, shoot his chains off and fight your way out through a hail of bullets?

This story is stupid.

Page ten. A montage, I guess. Are those borders around the long shot of the island that vanish beneath the waves, or…? Is that young boy part of the hair-flipping scene or another montage bit, possibly elsewhere on the island? 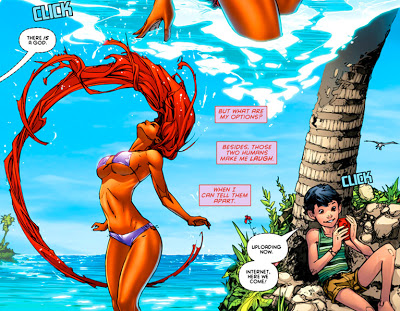 Starfire? Cheesecake. Big time. If that’s what they’re selling here, I defend to the death their right to do so.

Page eleven has more cheesecake and a bunch of references to people and events that are meaningless to me. The page ends with a confusing bit. Who? What? Where is Red Hood/Jason going? Where is Starfire going? I guess the shadowy female figure wasn’t Starfire. I suppose the weird word balloon was a clue….

Turns out the shadowy figure is “Essence.”

Then things get really unintelligible. On page fourteen there’s another batch of odd-shaped panels, but this time I’m guessing they show a vision Essence is providing to Jason. 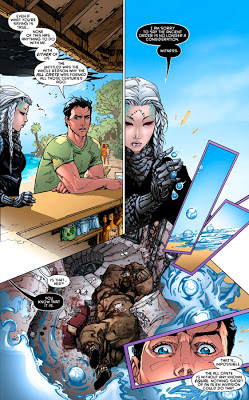 I can make no sense of the images. And this is comics-vet me typing.

It goes downhill from there. Unintelligible crap.

The story ends with Red Hood surrounded by enemies I don’t have much of a clue about. Red Hood is saying or thinking or narrating, “Finally. Someone to shoot.”

Not that I really got to know the three stars of this book, not that they were introduced in a meaningful way, but at the end, I don’t like any of them.  Roy Harper? A snarky kid who can apparently fire two arrows at a time and have another one nocked before its predecessors have traveled two feet.

And Starfire? I think she’s meant to appeal to the pubescent boy seen on page ten.

Don’t get me wrong, I’m in favor of sex, in favor of sexuality, in favor of expressions of same in any creative endeavor involving representations of the human condition. There is more sexuality in my work than in most comic book writers’ work. Sexuality is an important component of every character I write, just as it is an important part of every person I’ve ever met, even if by denial! And I’ve written a wide variety of characters with a wide range of sexual natures.

The problem I have with Starfire is that she’s a device, not a character. Feh. 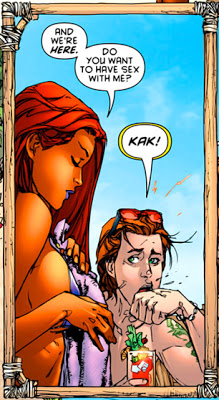 Get a real writer, DC. Or, Scott Lobdell, get a grip.

Yes, DC and Scott, I think we deserve an explanation for what you’ve done.