Independently, techberry made an observation regarding inconsistent characters:

This particular issue you reviewed highlights a lack of consistency that is rampant within The New 52 reboot.

You showed us a panel of Bruce Wayne surrounded by his ‘Robins’; Dick Grayson, Jason Todd and Damian Wayne.

It drives me ‘batty’ that as a reader of many titles, I am supposed to accept that the prepubescent Dick Grayson shown in this panel is the same young “man” currently showcased in the Nightwing comic? Not buying it.

That the cherub of a lad Jason Todd shown here also the same Jason Todd shooting his way through Red Hood and the Outlaws? Not making that connection.

Only Damian seemed to fit his approximate age…

Also, the ‘consistency’ of Batman between different titles is all over the place. I have a hard time keeping him character because each title has its own vision of who he is…

2 books I read were origin stories. None of them offered much if any explanation about the status quo they presented. By design, apparently.

Dear Jim – Not that it’s a particularly satisfying answer, but Dan DiDio’s intent with the “don’t bother filling in the backstory/ how people know each other, etc.” thing was, according to him, to allow room for later creators to fill in whatever they see fit. Like I said, I don’t think it’s particularly satisfying or sensible, but that’s his raison d’être for the lack of establishing captions/ backstory/ sketched-out causal connections, re-booting to five years in, etc.

Great idea for a “precise entry point.” Start in the middle, explain nothing.

Continuity and consistency take a great deal of work. My most recent experience working at DC Comics is three years out of date, but DC Comics is still a DiDiocracy, it would appear. The DiDiots rise to the top, and no one wants to work too hard.

If this “initiative” bogs down or fails, well, so what? DC gets a substantial sales spike and goes along better than before, at least for a while. DiDio, Lee, Harras, Johns and the rest keep their phoney-baloney jobs, collect fat paychecks and big bonuses a little longer.

And in a couple of years, when things get hopelessly tangled up again and sales slide, no problem. Do a new New 52. Do it till it’s as worn out as the ol’ Crisis trick. 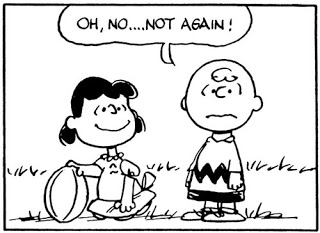 DC is like Lucy and we’re like Charlie Brown. DC keeps yanking the football away and we keep yelling Aaugh! and landing hard. They’re very sure we’ll keep coming back and try to kick the ball again. And, knowing some of the perps fairly well, I can assure you they’re pretty smug about it. 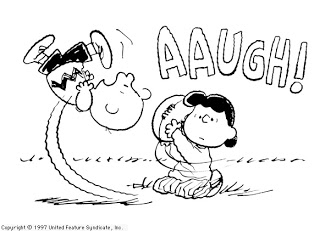 Diane Nelson, are you really on board with this “strategy?”

I had high hopes for you.

The Lucy strategy will work until Marvel or some emerging contender does it the right way. Starts with a powerful concept, a creative vision. Puts in the work and the effort. Thinks it through. Produces good stories, well told. Builds something meaningful that fires peoples’ imaginations and invites them in the way, oh, say, Harry Potter did.

Lucky for your “brain trust” that Marvel is almost as rudderless. It will probably take a market/distribution paradigm shift that opens new opportunities for a new player to arise, either an upstart or a deep-pocketed entertainment industry contender.

Not bloody likely soon. DC can probably pull off two or three more New 52’s before any threats emerge.

On the other hand, there seemed to be no credible threats to DC on the horizon in 1961….

If and when a threat does emerge, the DC DiDiocracy and the old Lucy trick are going to seem as tired, pathetic and dated as DC Comics did in the sixties, when Marvel arose to take the lead.

There are some entertaining books among the New 52 and some with good things about them. There are many talented people among the creators working on the New 52, some trained and skilled, some less so.

Churchill said, “No one can guarantee success in war, but only deserve it.” That works for comics and most other endeavors, too. I hope success comes to the New 52 and creators thereof who deserve it. 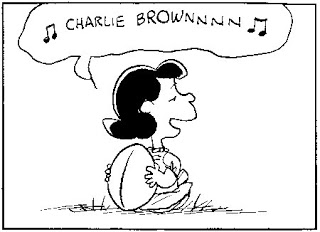 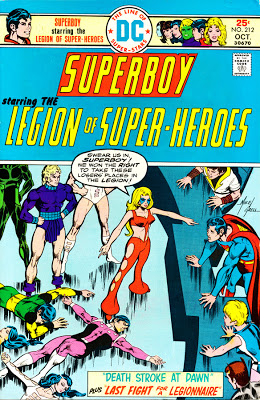 I wrote an eight-page second feature for that issue starring Shadow Lass and Night Girl entitled “Death Stroke at Dawn.” The issue came out in July 1975.

Shadow Lass, for you non-Legion-o-philes, “nullifies light,” that is, makes it dark. Night Girl is a wannabe Legionnaire who didn’t make the cut. She’s super-strong, but only at night or in darkness.

A super heroine who can be de-powered by flipping on a light switch is not ready for prime time.

In the course of the story, however, it occurs to Shadow Lass that the two of them working together could be dangerous. If Shady made it dark, Nighty could kick ass…. They both can see in the dark. Why not?

I wrote a scene in which Shadow Lass pulls up Night Girl’s dossier, kept on file by the Legion to check whether her power’s limitation was the only reason Nighty was rejected. I called for the dossier to appear on a large screen so we could all have a good look at it over Shady’s shoulder.

On the dossier we see what you’d expect—height, weight, planet of origin, etc. But we also see some futuristic data—courage quotient, reaction index, power level rating….

Editor Murray Boltinoff objected. He said that a dossier was as dull as a “railroad timetable.” It would remind kids of school. They’d hate it. He wanted the scene cut.

As it happened, Murray had originally commissioned the story as a ten-pager, then discovered (after I’d written it) that he’d miscounted and there was only room for an eight pager in that issue. I had to cut two pages of story. If you’re wondering whether I got paid for the extra work, the answer is no.

Toward the end of his career, Murray often had trouble keeping page counts and other things straight. But that’s a tale for another time.

Anyway, I cut two pages, including the dossier scene Murray loathed. But I loved the idea and kept it in mind.

Many years later, back at DC writing the Legion of Super-Heroes again, different editor, I finally got to use the idea, in this issue, on sale in October 2008: 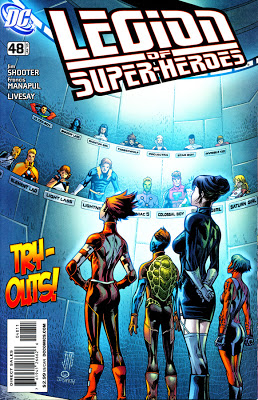 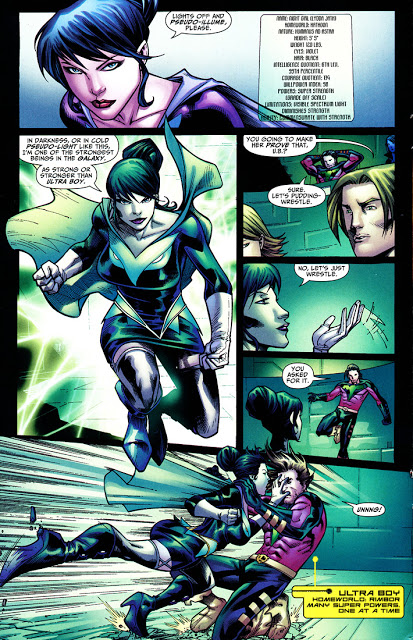 Not quite the presentation I’d hoped for, but….

The script is posted for download, if you’d care to have a look. It’s got some fun stuff in it.

Somewhere in the middle, while I was Editor in Chief of Marvel, I brought up the dossier idea again. It grew like Topsy. It was an amazing evolution. Tell you all about it Monday.

MONDAY:  Jane’s Fighting Ships, The Marvel Encyclopedia and Where It Went From There