There was a guy with a bullhorn directing the crowd headed toward the Jacob Javits Center, endlessly repeating: “Ticket holders, green entrance! Picking up tickets, yellow entrance!” He noticed me among the throng—I’m easy to notice in a crowd, as would be Lurch or Chewbacca. 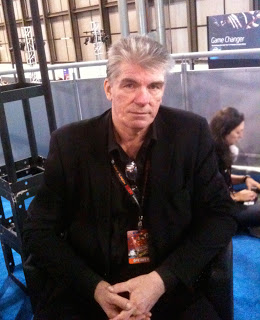 Actually, come to think of it, those two probably wouldn’t stand out much in that crowd. Anyway, he noticed me, and through the bullhorn blasted, “Good morning, Mr. Shooter!”

Inside, I met up with Brian David Johnson and his right-hand man Joe Zawadsky. 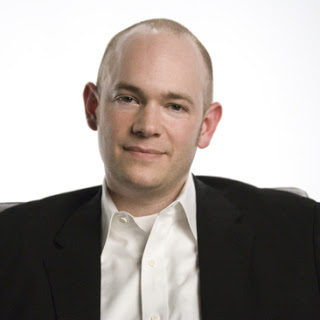 Brian is an executive at Intel Corporation.  His title is “Futurist” with this appended: “Principal Engineer and Director, Future Casting, Interactions and Experience Research.” Google him. Or start here: http://www.forbes.com/sites/alexknapp/2011/10/13/brian-david-johnson-intels-guide-to-the-future/
Mike Hobson, Publisher of Marvel Comics for much of my time there, always used to joke that the title he really wanted was “High Plenipotentiary of Tunis.” Even if he had that title, I suspect he’d be jealous when he heard Brian’s title.
Brian is scary smart. One of those people who is conversant-with-often-expert-on any subject you raise. “Brian,” of course, is spelled with the same letters as “Brain.” Coincidence? I think not.
At noon, Brian, Craig Engler, who is a SyFy Channel honcho, Cory Doctorow—yes, that, Cory Doctorow—and I were scheduled to do a panel discussion entitled “Screen Future: Gaming, Comics and TV Around the World and Five Years From Now.”
First, Brian and I took a walk around the con floor. A little of it. Too much territory to explore unless you had two weeks and Sacagawea with you. It was early, 10 AM-ish, so the aisles hadn’t gotten impassibly crowded yet. We saw some cool stuff. Brian led me to a stand where the exhibitor was selling Star Wars posters painted in a WWII propaganda poster style. Beautiful. Unbelievable. Princess Leia never looked so good.
We ran across brilliant artist “Buzz” Aldrin Aw, legendary Herb Trimpe, super Superboxers creator Ron Wilson, Hall-of Famer Chris Claremont and the estimable Bob McLeod. Later, we ran into Dave Ryan (War of the Independents), Gary M. Miller ( www.delusionalhonesty.com ) and artist David Hillman, who worked for me way back at VALIANT.
Time came to do the panel. The room, two days forced march from the con floor, had about 190 seats, but it was SRO. Joe Zawadsky counted the house—of course he did—because that’s the kind of hairpin he is. 230, he said. Some people, daunted by the crowd (and no open seats) turned away.
Panel-mate Craig Engler is Senior V.P. and GM of SciFi Digital and Tweets the latest about the channel at @syfy. He’s a heavy-duty media maven.
Cory Doctorow is Cory Doctorow, famous SF author, Internet visionary, champion of free sharing and filesharing. His musings available, just in case you are the last person on Earth not to know, at www.boingboing.com .
Brian moderated and contributed some insights. Couldn’t stop himself. Biological law says natural abilities must be used.
I wedged in edgewise a few thoughts and made jokes.
JayJay the Blog Elf and her significant other, Freddy recorded the panel. Check out the video tomorrow. 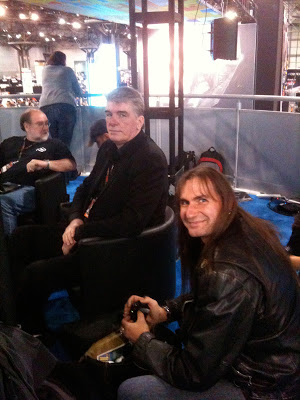 After the panel, Brian, Cory, JayJay, Freddy and I went to the Intel “booth.” More like a small city…. 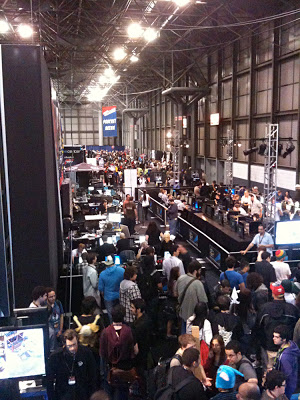 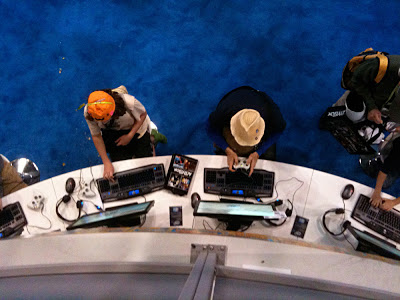 Brian is the author of Science Fiction Prototyping: Designing the Future with Science Fiction and a fascinating novel with deep roots in real science, Nebulous Mechanisms. He also is the mind behind The Tomorrow Project Anthology, a unique book of stories similarly built on a scientific foundation including works by Cory Doctorow, will.i.am, Douglass Rushkoff and Brian himself.
Acquire these books. Read them. They will open your mind. Or explode your brain. Either way, fresh air will come rushing in….
Intel was giving away copies of the latter two books! Intel was giving away a lot of things, everything from pens to super-processors that cost big bucks. Nobody walked away empty handed.
The economic downturn apparently hasn’t affected Intel because they’re global and they’re that good. Their prosperity shows. They had the biggest booth with the most going on. It was packed, always. Music, an outstanding MC/Host on the mic all the time directing the festivities, of which there were many…. Want to take a simulated spin in a Formula One car? Play all manner of games? What the Hell are Angry Birds anyway? Kidding. I know, I know, they’re pissed off parakeets and disgruntled ducks. 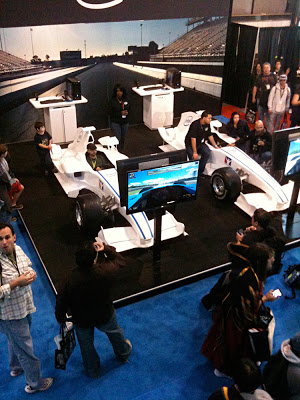 Brian and Cory had a one hour autograph session, signing free books. Intel support troops had to cap the line.
JayJay, Freddy and I got to sit in the turret atop the center structure of the Intel booth with a magnificent view of the con floor while Brian and Cory signed.

Then, Brian and I went off to the W Hotel at Union Square to meet a friend of his, Andrew Hessel, MSc. “MSc,” or “Magister Scientiae.” Loosely translated from the Canadian, I think, it means “Really Smart About Science Stuff.”
Google him. Or start here: http://openwetware.org/wiki/Andrew_Hessel 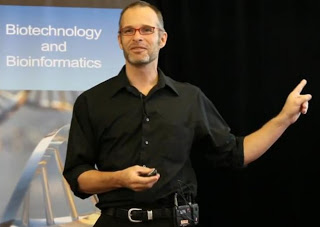 We talked about what was, what is, and what could be. They blinded me with science. I could barely keep up, and I’m good at that stuff. It helped that they’re good at explaining things in English, rather than Magister Scientiae-speak.

We had dinner at a good steakhouse nearby, Angelo & Maxie’s.

I have a story brewing. Not going to let all that great intel…heh, heh…go to waste. I’ll let you know how it goes.

Unbelievable day. I slept like an exhausted toddler after a day at Disneyland.

NEXT:  Guaranteed, Next Time for Sure, ULTIMATE COMICS – All-New Spider-Man #1 Dissected and Analyzed. No, really!

NYCC Panel – Screen Future: Gaming, Comics and TV Around the World and Five Years From Now