Ditko at VALIANT and DEFIANT – Part 1

In 06 VALIANT, 09 Reminiscences and Tributes

I first met Steve Ditko sometime in 1977. For the life of me, I can’t remember where.

It might have been at Continuity, Neal Adams’ studio. Continuity was the crossroads of the comics industry. Besides the people who actually worked there, a lot of artists would show up looking for freelance advertising or storyboard jobs, which paid way better than comics. Some comics creators—Cary Bates, Jack Abel and Howard Chaykin come to mind—sublet studio or office space from Neal. Continuity was a Mecca for young artists. New kids trying to break into the business like Frank Miller and Bill Sienkiewicz would turn up hoping that Neal would look at their samples and give them advice.  Other comics people, like me, for instance, would show up once in a while to see someone who worked there, talk business with Neal or just hang around the crossroads for a while and catch up on the industry gossip.

As far as I know, Steve Ditko never worked there, but, like I said, almost everybody stopped by at some point for one reason or another.

Anyway, I met Steve, probably there. What an honor. I loved his work. When I was a kid I tried to emulate his style.

By the way, Neal was at his crusading best in those days, leading the fight to get Siegel and Shuster recognition and compensation for creating and establishing Superman—and winning. He also was one of the prime movers of the Comic Book Creators Guild. A story about the Guild which includes an anecdote involving Steve Ditko can be found here.

After I became Editor in Chief of Marvel in 1978 and therefore had the power to offer him work, I told Steve that if he ever wished to work for Marvel he was welcome. Anytime. He was a Founding Father. I couldn’t rectify all the past injustices (though I was trying), but I could and would keep our door always open to him.

Steve apparently wasn’t too keen on having anything to do with Marvel early on, but a few years later, he came to see me at Marvel’s 387 Park Avenue South offices. I think he realized that we had made a sincere effort to make things better and deal more fairly with creators. Or maybe the fact that Stan wasn’t there any more (having moved out to the Coast to work at Marvel Productions) made a difference. Or maybe he just wanted work. Whatever. He was willing to work for us and I was happy.

Giving Steve work is easier said than done. He’s very particular about what he will and won’t do. He wouldn’t consider anything to do with Spider-Man or Doctor Strange, for instance. He refused to work on any books with “flawed” heroes. He had a pretty strict definition of “hero.” Per him, the character isn’t a hero if he or she is flawed.

I said, but what about Spider-Man? Wasn’t he flawed? Steve said that when he worked on Spider-Man, Spider-Man wasn’t yet an adult. It was okay for a kid to make some mistakes, but….

Fortunately, we had ROM, Spaceknight. ROM fit Steve’s criteria well enough. He did some great work on ROM.

But if we hadn’t had ROM, we would have created a character for Steve that suited him. As long as I was EIC, there was a place for him at Marvel, even if we had to make one up special.

In November 1989, I started a company called Voyager Communications Inc. No comma before “Inc.” Just like Time Inc. Voyager published comics under the VALIANT imprint. VALIANT (my VALIANT) is all caps, always.

I had acquired the rights and set out to publish new adventures of Magnus Robot Fighter, Solar: Man of the Atom, Turok Son of Stone and other old, then-dormant Dell/Gold Key characters.

But I lost control of the company shortly after we started. On Friday, December 22nd, the last working day before Christmas, I was walking home from the office at Seventh and 47th. I lived on Madison at 38th. Partner Steve Massarsky was with me, headed for Grand Central. We walked together as far as 44th and Madison. There, on that corner, he told me he had been secretly dating and was sleeping with Melanie Okun, one of the two principals of Triumph Capital, the venture capital firm that had funded Voyager.

I told my other partner, Winston Fowlkes. Like me, he was appalled. Talk about a conflict of interest…!

After the holidays, Winston protested to Melanie’s partner, Michael Nugent. Winston insisted that something be done.

Something was done, all right. Massarsky, his bedmate and her partner convened the board and fired Winston for daring to object. Massarsky’s shares and those controlled by Michael and Melanie/Triumph constituted a majority. I was President of the company, but they had ultimate control.

So, my plans to do super hero books were shelved. Massarsky had other plans.

Massarsky had been supposed to wind down his entertainment law practice and work full time for Voyager, but he didn’t. He increased his practice, in fact. Even hired an associate. He worked nearly full time on his own business, screw us, though he still drew a salary from the comics company. Used our space. Ran his mail through our postage meter. Used our supplies. Etc. Nothing I could do about it. His bedmate and her partner allowed it. They had me outvoted.

Massarsky became the entertainment lawyer for Nintendo and also took Leisure Concepts International as a client. LCI represented Nintendo for licensing as well as the World Wrestling Federation. So, he did a little self-dealing, licensing first Nintendo for comics, then the WWF for comics. Those deals he made with himself profited him, personally. A lot. And I was stuck with having to create Nintendo and WWF comics.

Besides, all the bad guys wanted was money. I believed that if I could somehow make the company succeed, I could raise the money to buy them out. Fulfill their “exit strategy.” That’s what Triumph and Massarsky wanted—the big killing and exit.

So, we were making Nintendo and WWF comics. An interesting (to me) tidbit is that David Lapham’s first professional comics work was for one of our WWF books.
Then one day, Steve Ditko came to see me.

I don’t know exactly how long Marvel had kept Steve on after I left there, but eventually they’d cut him loose. Jerks.

I’d never before seen Steve looking…I don’t know. Worn down? Worried? Troubled? Hard to say, Steve doesn’t exactly show his feelings much, and was not the type to express despair or even its lesser cousins. But he didn’t look happy. He didn’t look well. And he needed work.

I didn’t have the power to make something to suit him, and believe me, Steve is the kind who would starve rather than violate his principles, but luckily, I had WWF scripts waiting to be drawn! The WWF “faces” (short for babyfaces, good guys) were good enough and the “heels,” or bad guys, were evil enough to pass muster with Steve. I think that was the one time I was happy that we had the WWF.

He started working for us.

P.S. He did some great stuff for us. 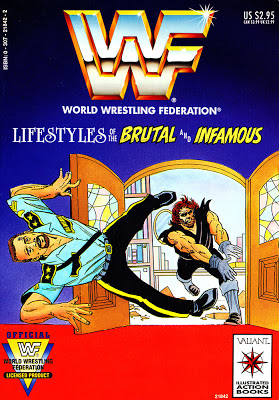 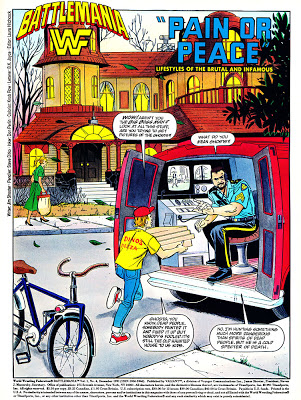 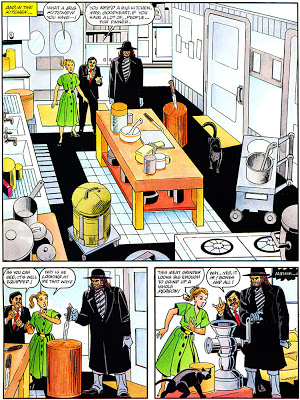 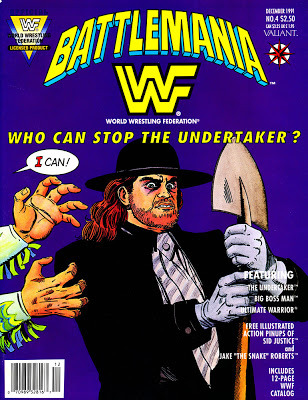 Ditko at VALIANT and DEFIANT – Part 2