Steve Gives Us a Personal Tour of Geppi’s Entertainment Museum

You’d think hitting a few imaginary home runs with one of Babe Ruth’s 1927 bats might be the capper for the day. Nah.

We could have spent days checking out the treasures in Steve Geppi’s office but he was eager to give us a tour of his pride-and-joy museum.

Somewhat reluctantly, Herman Rush and I followed Steve to his car. We drove from Diamond’s Timonium, Maryland headquarters to Baltimore, specifically, to Camden Yards, where Oriole Park, M T Bank Stadium and Geppi’s Entertainment Museum are located. There are also restaurants and upscale shops in the complex, plus two other museums.

At that time, Steve was a part owner of the Baltimore Orioles, so he could park in the special reserved area right outside the ballpark, close to the museum. Groovy.

I had been to the museum once before, to attend the spectacular Opening Gala Steve threw on September 7, 2006, the day before the museum opened to the public. What a party! I still have the invitation. It came in this box: 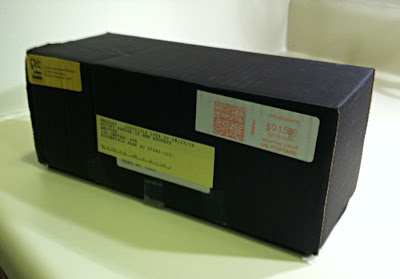 Here’s the box opened. Yes, that’s a black tie and a “champagne bottle,” filled with glitter, resting in a bed of paper straw mixed with glitter: 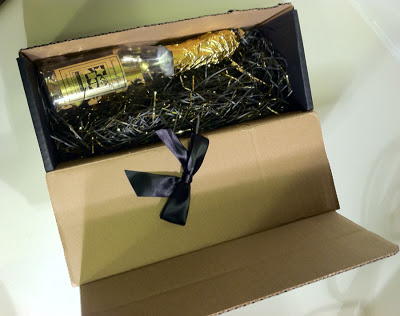 There was also an engraved invitation, which is in some file somewhere. I’ll show it when I come across it. Here’s a better shot of the champagne bottle: 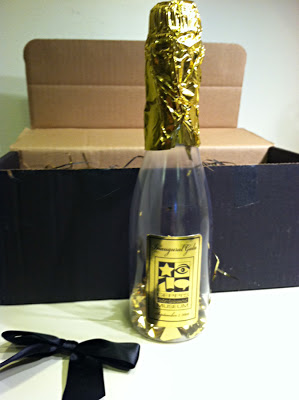 There was a Who’s Who of comic book people at the party, as well as celebs from other fields. Somewhere, I have a great picture of 6’7” me and 6’8” Mike Richardson, Master and Commander of Dark Horse, flanking somewhat less-tall Steve. I also have some great pix with Bob Overstreet, Chuck Rozanski, Paul Levitz, and other industry leaders, plus assorted geniuses and what have you. I’ll find them someday.

Naturally, the party-goers swarmed the place. Though it was crowded, especially around the most “wow” of the exhibits, being a head taller than most, I got a fairly good view of everything. My poor girlfriend mostly saw a wall of humanity between her and the goods. Lots of people there that night. It was the place to be.

>Merely getting a decent view is faaar different than being given a guided tour by the man who built the place on a fairly quiet, un-crowded day.

I can’t begin to describe what we saw. There was a political cartoon by Benjamin Franklin, which Steve said was the first of its kind, worth millions. Disney memorabilia, items from TV shows and movies. And toys! Examples of every great toy I’d had as a kid. A Davey Crockett coonskin cap. A One-eyed, One-horned, Flying Purple People-eater mask. Everything else you’d expect—Silly Putty, Super Balls, Slinkies, Hula Hoops….

The one thing that was missing, and I called Steve on it, was a Zorro Sword.  When Zorro became a fad-hit in the 1950’s, a toy sword with a chalk-holder tip was the rage. You could make Zorro’s “Z” on walls or whatever with your sword! So hep! Steve knew about Zorro Swords and was on the lookout for one. I wonder if he’s found one yet.

Once, I spent an afternoon in Ray Harryhausen’s home, which was filled with models he’d created. I had the same sense of wonder there, but it was focused on the stop-action animation movies he’d done effects for. At Geppi’s museum, it was overwhelmingly broad and vast.

Steve recounted the adventures he’d had acquiring many things, some of which were as remarkable as the items themselves.  He explained that if he found an item he was bent on acquiring, even if it wasn’t in great condition, he’d buy it. Then, if a better specimen turned up, he’d buy it, sell the first one, trading up.

About so many items he said things like, “the original,” “the only one left,” “one of three in existence,” etc.

Geppi’s Entertainment Museum is a blast for anyone who had a childhood. Or ever enjoyed a movie or a TV show or any popular culture at all. For folks like us, you and me, it’s heaven. Highly recommended.

Fans of opera, abstract expressionism and 16th Century Intellectual Satires may be disappointed.

Our last stop was the museum gift shop, where Steve loaded us up with freebies.

Among the ones I was given was this: 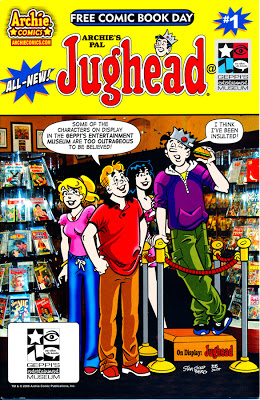 Time came to go. Steve drove us to the train station. Pretty much exhausted but abuzz with ideas, Herman and I made our way back to New York.

One thing that occurred to both of us was to create a virtual, online tour of the museum with clickable, drill-down-able information about the exhibits. Many other ideas of ways we could work with Steve, and he with us.

Right about that time, the sub-prime mortgage crisis was hitting its stride and the general economic collapse was collapsing thunderously.

The effects were devastating to a lot of people. Two of the richest people I know—and I know some rich people—lost everything and are now as poor as me.

Steve and Herman apparently became interested in or consumed by other matters. Nothing ever came of our meeting or the grand dreams Herman and I had on the way home.

Here’s the brochure I picked up: 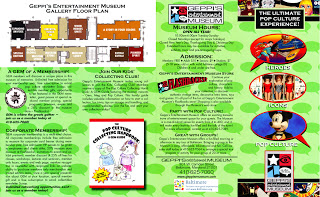 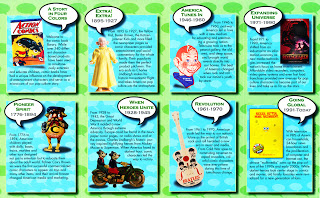 Here’s a link to the Wikipedia article on Geppi’s Entertainment Museum:

NEXT: Items of Interest – And Gary Gygax