Anonymous/TKay pointed out that the first page of #3 was in medias res, that is, it was actually the last page. He’s almost right. The second page is the last page, and when I checked it out again, the meaning of Hippolyta’s words, mysterious to me on my readings, became clear.

I am familiar with the technique. I’ve seen movies that used it, though I’m having trouble calling any to mind. I think Angels and Insects did, and if I remember right, I had no trouble with that. TKay said it took him three readings of WW #3 to suss it out. He said that a clue was that Aleka, who had been punched by Wonder Woman, was leaning on another Amazon’s shoulder.

Honestly, I took that as camaraderie.

Near the end of the book, Wonder Woman hit Aleka hard enough to send blood spewing, but there was no sign of damage to Aleka on page 1, presumably moments later.

But on the first page, Hermes, Zola and Strife are in front of the crowd, standing, facing the pyres. Near Aleka, in fact, in what seemed to be the center of the crowd. What did they do, decide to circle back, find a good viewing spot and watch the flames for a while?

The creators do not make it easy to follow along at home.

Most of all, I was so taken aback by Strife, who caused all the deaths, standing there among the mourners, her presence being tolerated by the Amazons, their Queen and Wonder Woman, that I was, what’s a good word…? Distracted.

Still, I probably should have figured out that the scene was in medias res. Sorry.

Other than that, I stand by what I said.

Everyone else is entitled to his or her opinion, too. You like what you like for whatever reasons. If something works for you, it works. Let freedom ring.

However, one other comment does merit a reply: Stuart Moore thought he’d better clue me in that “stories can be told all different ways…”

When have I ever said otherwise?

But whichever way you pick, you have to make it work. I take ‘em one at a time and I calls ‘em as I sees ‘em.

I’d be curious to know Jim’s opinion on profanity and so forth in comics. Frank Miller was openly critical of Garth Ennis’ Preacher when it came out.

Depends on the comic. When I was at Marvel and our newsstand comics were on spinner racks that touted them as wholesome entertainment for kids, I wouldn’t allow profanity. In EPIC Comics, sure. In comics not limited by a commitment to the Comics Code or otherwise, then any non-actionable material is okay by me. Boiled Angel was okay by me, though not the sort of thing I particularly cared to read. Penthouse Comix were okay by me. Freedom of expression is okay by me. I am a supporter of CBLDF. The debate gets a little muddy with characters like Superman and Batman. Their comics were made for and sold to kids for a long time. Does the lingering perception that stories featuring them appeal to children limit them? That has been debated on and off here. I don’t know. DC owns those particular characters and will make whatever judgment they see fit. If it were up to me, if I were managing the careers of those characters, I would probably keep them at the prime time broadcast TV level of mature content, and no more. If I were managing the career of Mickey Mouse, I’d keep him squeaky clean.  : )

Apropos of that, these are some things I came across recently: 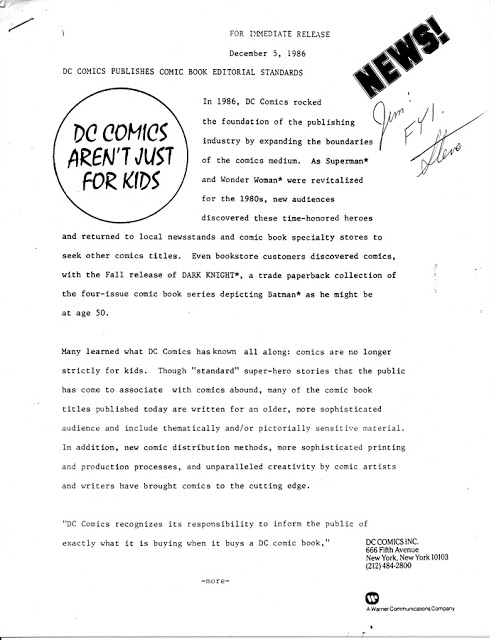 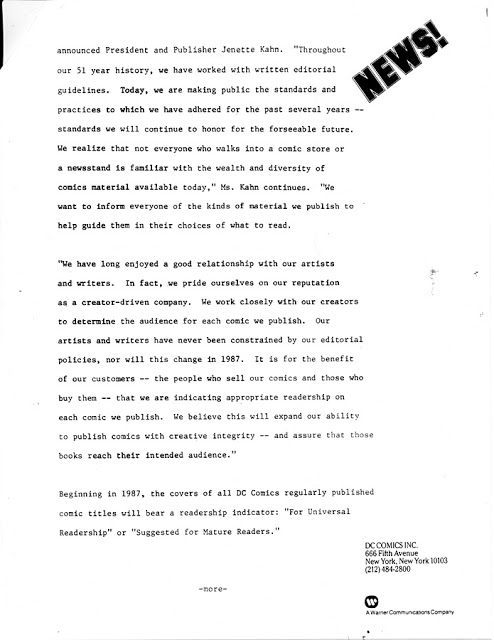 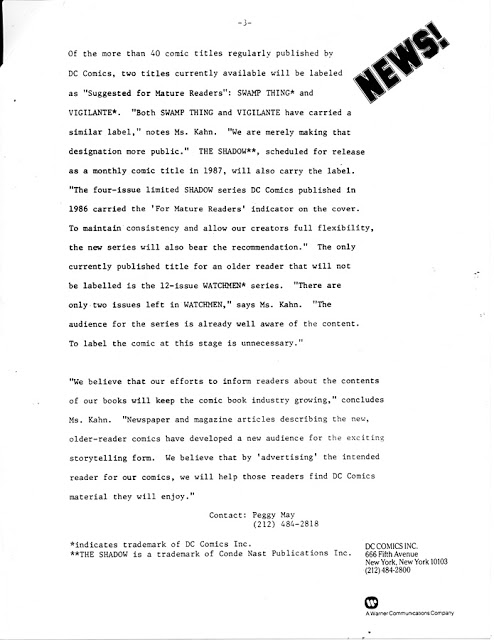 Here’s the first anti-profanity memo I wrote at Marvel. 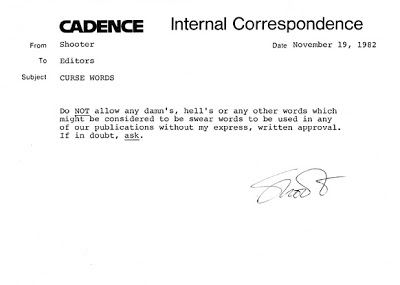 I sent several more such memos along the way after that. Some were a little more elaborate, but the drift was the same: no profanity in newsstand books and I wanted to be in the loop if someone planned to use hells or damns in, say, an all-direct book.

I never wrote a “guidelines” memo for Marvel Creators. I didn’t have to. The editors knew my feelings about staying within the same limits as broadcast, prime time TV in all our color comics, and unlike today’s editors, they actually exerted some governance over the books in their care. (As little as possible, mind you. My goal, and most of them agreed, was to encourage creators who had vision and some chops to do their thing and provide training and help those who needed it. But, I digress….)

My memos and directives about content weren’t meant for EPIC material. Archie knew what he was doing and didn’t need me honking at him. I think Archie drew the line at anything that would cause his books to be pulled off the stands and sold from behind the counter.

NEXT:  Made to Order