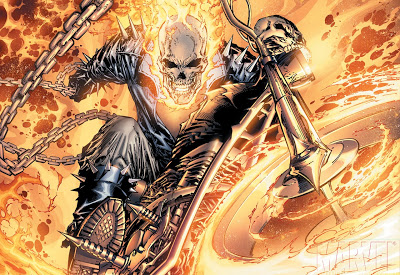 There has been much vitriol hurled against big, mighty Marvel for suing little, helpless Gary. Doing so has been characterized as petty, vindictive and cruel. Some speculate that Marvel’s coming down on Gary was a deliberate warning to all others who might dare contest ownership of properties. A few defenders of Marvel pointed out that Gary sued them first, cost them a ton of money in legal fees and apparently, given the decision, was in the wrong.

Some people brought up the fact that Ghost Rider was created by more than one person and many people along the way have made significant contributions.

Marvel’s suit against Gary raised another, related issue. There has been debate about whether or not artists selling sketches of characters owned and in most cases trademarked by the various publishers constitutes infringement.

And more. You get the drift.I’m not a lawyer, but for over nine years, as Editor in Chief at Marvel, I was obliged to represent Marvel’s legal position to creators with regard to their work. I worked closely with Marvel’s house counsel and outside counsel. I attended an intellectual property law seminar. I was called upon to give depositions in several cases. In more recent years, I have served four times as an expert witness on cases involving IP issues. I know a good bit about the subject.

I don’t know all the particulars of the Ghost Rider suits, so I won’t attempt to pontificate on those, specifically. I will offer a few general thoughts:

1.  Doing work-made-for-hire means that you are selling your services, not whatever results from the services you perform. No rights need be specified, though for belt-and-suspenders purposes, they often are. What was on the back of the checks, crossed out or otherwise, is probably of no significance. Even if there was no legend on the back of the checks, it probably wouldn’t change anything. In those days, before the copyright law of 1976 took effect (January 1, 1978), nothing needed to be signed to effect a work-made-for-hire situation. The arguments would more likely be about whether or not the services rendered were a contribution to a “collective work,” was the W4H policy of the employer consistent, was the work done under the direction and control of the employer…and more.

2.  Speculating about Marvel’s motives seems like a road to nowhere. From the outside, Marvel’s suit against Gary looks to me like one of those defend-the-trademark things. If you know someone is violating your trademark and you don’t do anything about it, you may lose your trademark. You must take action. You can’t pretend to take action. No “just kidding, we don’t really want the money.” I believe that a judge would frown upon that. You have to at least look like you’re serious. That said, is it possible that Marvel will show a little compassion and never bother to collect, or in some other way let Gary skate. Could be. We’ll see.

While I was at Marvel, several times when someone violated our trademarks, I convinced the upstairs bosses to give the infringer, if he or she wasn’t truly evil, a retroactive license for a dollar.  Our marks were protected, they weren’t hurt, all was well.

The best known of those instances was when Dave Sim did a parody of Wolverine in an issue of Cerebus—which sold so well that he did it for another three issues. Parody is protected. Once is okay.  Four times constitutes infringement. But Sim wasn’t an evil guy. We liked him. We intended to do business with him.  So we handled it reasonably, I think.

The difference here, it seems to me, is this: When litigation is going on everything done or said by either side may and likely will be forged into a weapon for the other side. Being generous might be seen as a tacit admission that the other side has a point.

3.  Multiple creators tends to lend credence to the collective work argument. I’m willing to be corrected on this if I’m wrong, but I believe that I coined the tagline “Spirit of Vengeance” back when I briefly wrote the Ghost Rider. I’m not expecting a check in the mail for that anytime soon. I wonder if Mike Friedrich ever got a nickel for coming up with the Bat-moniker “Dark Knight?”

4.  Selling sketches of trademarked characters at conventions and elsewhere…now there’s an interesting situation. Collectively, a vast amount of money must be made that way. To my knowledge, the publishers haven’t ever taken notice. But, I guarantee, it’s on the radar now.

One person said that as long as it’s a private transaction between an artist and a collector, no harm no foul. To that person, I’d suggest setting up a booth at the San Diego Comic Con and selling sketches of Mickey, Donald and Goofy. See what happens. Disney once succeeded in preventing Carl Barks from selling paintings of Uncle Scrooge and fellow Ducks, though later, I think, they worked out a license deal. And Disney owns Marvel now. Hmm….

I think the business of selling sketches is just about to blow up like Krakatoa.

Once again for the record, I believe that the comic book industry has always treated creators unfairly. It should have been different all along the way. It should be different now. But, it was the way it was and it is the way it is.

Here’s the kicker. I believe that the publishers would be wise to rectify the injustices of the past as best as can be done, and to install enlightened policies going forward. I honestly think that would lead to far more great things being created, far greater profits in the long term…and far fewer lawsuits right away.

NEXT:  The Doctorow Doctrine and Other Techno-Tectonic Upheavals